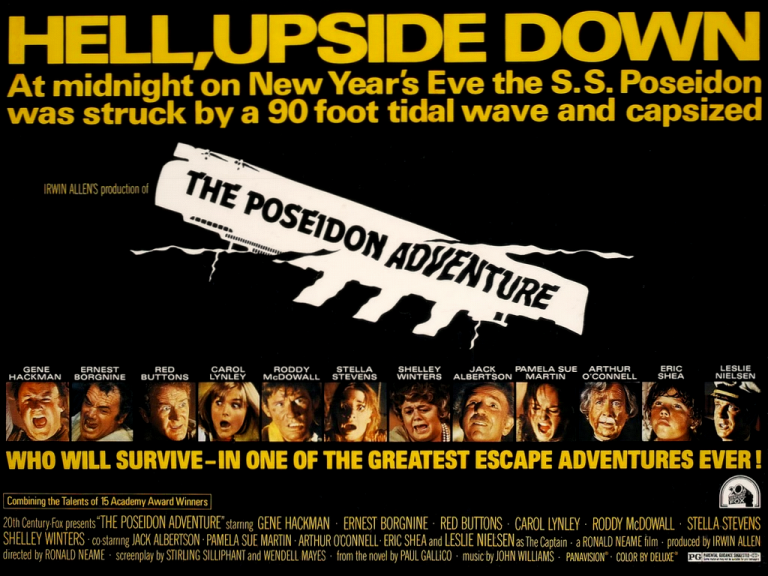 Well, nothing new opens in cinemas for the new year weekend. No Jackie, no 20th Century Women, no A Monster Calls, and no Hidden Figures, none of the end-of-2016 features I’ve been waiting to see before I write up my list of the best films of the year. I may have to bite the bullet and just go with what I’ve seen so far, leaving room for asterisks and amendments.

A couple of older films are in cinemas this week, including The Poseidon Adventure. Believe it or not, it actually holds up pretty well. You might think the 1972 disaster movie is a weird pick for this weekend, but I guess it’s a New Years Eve movie? That I’d forgotten. Also still playing is The Sound of Music.

Of films still in cinemas, I’d recommend London Road and Lion. I know a lot of people are really excited over La La Land, but while the music and production design is fun, it’s a bit of a flimsy concoction. (Though everyone in the group I went to see it with loved it more than me, I must admit.) I suppose everyone is still watching Rogue One: A Star Wars Story. My review won’t be up until next week because of reasons.

Speaking of Star Wars, it’s been a rough week. We said goodbye to Carrie Fisher, who we’ll always remember as Princess Leia. I don’t have much to add to all the wonderful testimonials to her legacy, her wit, and her bravery in discussing her struggles with addiction and mental illness, except to say that Star Wars was the primary myth of my childhood, and Leia made a big impact. That could be because aside from Luke’s Aunt Beru, she’s the only female with a speaking role in the whole movie. I loved her in The Blues Brothers, too. She wrote the semi-autobiographical novel Postcards From The Edge, which was turned into a film in 1990, directed by Mike Nichols and starring Meryl Streep and Shirley MacLaine in the Debbie Reynolds part. And now, in a strange twist of fate, Reynolds is gone, too. One of my colleagues remarked yesterday that Fisher was fond of pointing out how her mother always upstaged her, that Reynolds, the star of Singing In The Rain, was so hungry for the spotlight she always found a way to take it from her daughter. She kind of did it again, didn’t she?

Paul Simon was briefly married to Carrie Fisher, though involved with her on and off for years.To the best of my knowledge he wrote two songs about her, and both are wonderful. I would recommend those who want to remember Fisher should read her books, check out her interviews online, and watch her movies. But right this minute, maybe give a listen to these tracks she inspired by one of the world’s great songwriters.

One last thing I want to mention this week, and it’s about trailers. I see a lot of them, but don’t often go out of my way to comment, because it’s just marketing. Trailers can be entirely misleading, a vehicle of total misdirection, and they can also be far too spoilery. Sometimes, they’re just terrible.

Witness these two, coming to a theatre near you in 2017:

These both make me want to retch.

I love dogs, but not talking dogs. You would have to drag me in chains to see A Dog’s Purpose based on this trailer. It looks like an appallingly saccharine flick about smug, reincarnated pooches. And don’t get me started on The Shack. What are we supposed to take from this trailer? Sam Worthington’s daughter gets murdered but at the site of the murder he finds a magical kingdom of truth and beauty, along with fairy godmother Octavia Spencer who helps him come to terms with his pain? I haven’t read the book it’s based on, but this reeks of proselytizing.

Here are two trailers for films in 2017 I will go and see. Yes, they’re both sequels, but they come with the possibility of being quality, given their predecessors.

The first one is for Alien: Covenant, Ridley Scott’s return to the Alien universe he founded back in 1979. I am one of the few who really enjoyed Prometheus, so I’m interested to see where this one goes. What many folks complained about with Prometheus, aside from plot issues, was it wasn’t close enough to the Alien movies we knew and loved/feared. I didn’t get that—I found it was very much like those pictures, an immersive body-horror/monster movie. With this trailer, the connection to the original Alien movies looks much more explicit.

…and much more dull. Yes, I’m happy to see Michael Fassbender’s David, the android from Prometheus, back in one piece. Katherine Waterston and Billy Crudup are usually pretty great, but what else is here that advances this story from what we’ve seen before? Nothing. As a trailer, this doesn’t much excite me.

It gives us nothing about the plot. It gives us two characters, one we recognize from the original and one we don’t. Scott is producing, but the uber-hot Denis Villeneuve, recently of Arrival and Sicario, is directing. And the look and sound is startling—fresh, but familiar.

This trailer for Blade Runner 2049 is a work of marketing art. It’s exactly the right way to do it, and it’s given me a reason to try and stay alive until October.