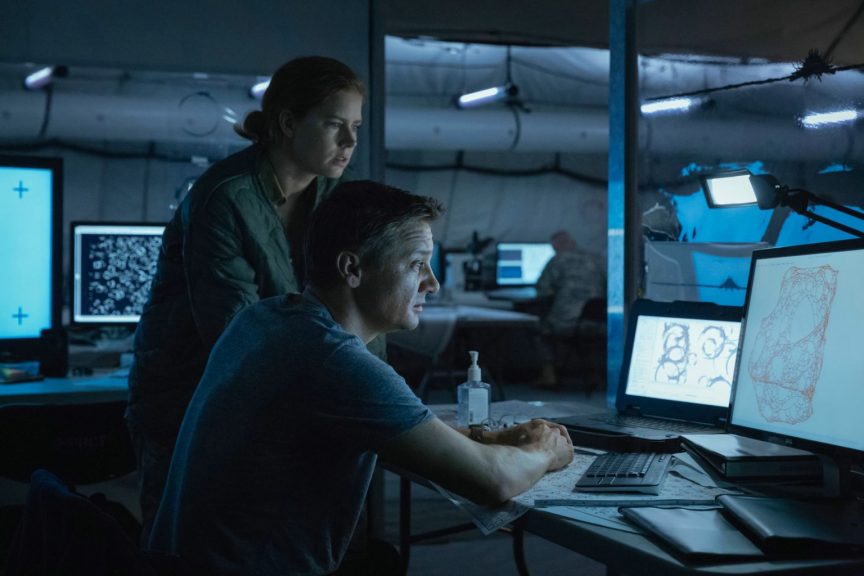 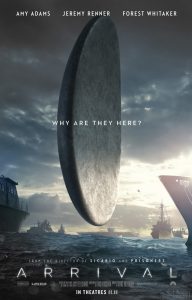 We meet Louise (Amy Adams at maximum luminosity) in a melancholy prologue that feels like it’s out of a dream. Villeneuve, like his fellow Quebecker-in-Hollywood, Jean-Marc Vallée, has a knack for perfectly matching a score with shallow focus imagery. Characters move in and out of the camera’s focus, making for wonderfully woozy, but riveting, cinema.

Louise is a master linguist, recruited by Colonel Weber (Forest Whitaker and his peculiar accent) because aliens have finally arrived on Earth: 12 ships like giant, textured Brazil nuts floating in the air over nations across the planet. Louise joins Ian (Jeremy Renner), a physicist, and is transported to the site of one of the visiting crafts where she becomes part of a military research operation. The questions she needs to ask—crystal clear since Weber repeats them more than once: “Why are they here? Where did they come from?”

This set-up doesn’t veer too far from the template carved out in The Day The Earth Stood Still, Close Encounters Of The Third Kind, or Contact, high profile movies about alien visitations, its own sub-genre of science fiction tending to produce thoughtful, sometimes terrifying, films—Independence Day and Mars Attacks notwithstanding. Here the freshness comes in the approach, and this lingering sadness in Louise’s personal life, which you suspect will somehow inform her work. But Villeneuve’s gorgeous way with imagery and especially sound—the roar of jets and helicopters repeatedly punctuate the first 20 minutes—keeps the air moving and the ground shifting beneath the genre tropes, sometimes literally.

It turns out Louise, in her quiet, intense way, is very good at the job of deciphering glyphic communications, and the puzzle of why the aliens are here both narrows and widens around her. It works well despite some deus ex machina moments and an abandoned subplot about treasonous soldiers—all subsumed by much more compelling, primary threads.

Arrival manages to dance between two parallel themes—one around the importance of clarity in communication, not just with extraterrestrial intelligence, and the other, equally as powerful, about choices we make in the face of the inevitability of death. There are some thematic similarities to The Eternal Sunshine of the Spotless Mind,  which is extraordinarily high praise here at Flaw In The Iris. 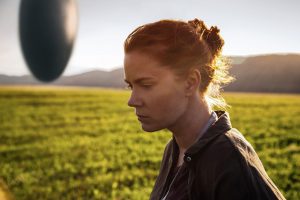 All of this is executed with typical confidence from the director of Sicario, making for a surfeit of ideas on a bed of emotion. And the reason we care is mostly thanks to Adams, who gives a performance of that gathers our affection steadily throughout. Renner, however, has a knack for finding new ways to grate, a small demerit in an otherwise stellar effort.