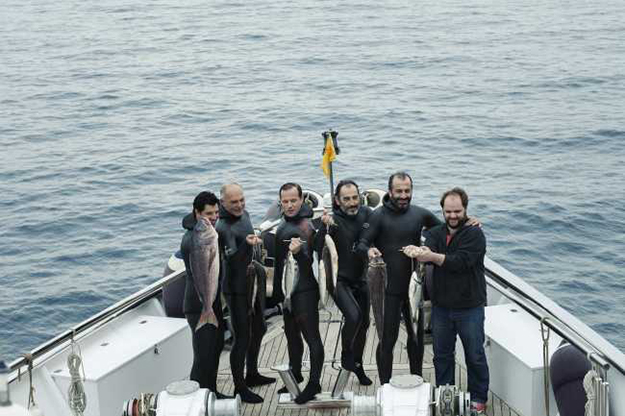 I hope you’ve all recovered from the Atlantic Film Festival cinema-going marathon—you can see all my reviews here at the #AFF2016 collection, and I urge you to check out the thoughts of my Carbon Arc colleague Zack Miller over at the independent cinema’s site.

Said cinema series is about to launch again with a series of films running on Fridays and (occasional) Saturdays through November. On Friday at 7pm and 9:15 pm we’ll be showing Chevalier, a Greek comedy about many of the ways men are stupid. Next week the screening is an American indie called The Fits and the following week it’s a touching South Korean documentary called My Love Don’t Cross That River.

For more about these films, the screening times, and tickets, please go here. Hope to see you on Friday night.

Since I ran the gauntlet of the #AFF, I’ve decided to make a change or two to Flaw In The Iris.

I’m doing away with the ▲▲▲▲▲ system, basically a star rating system for films. I’ve found it too restricting and too reductive. In the future, if you’re interested in knowing which films I genuinely recommend, there’s a tab for that on the top of the page: RECOMMENDED. (Or you can go here.) And if you want to read about the films I think are some of the year’s worst, there’s a tab for that too under the FILM CULTURE tab. (Or go here.) For anything that falls in between, well, I’m sure you can catch my drift in my 200 to 400 word write-ups, or you can search via genre.

OK—now onto what’s in cinema and what’s opening.

Getting another week at the Oxford is Hell Or High Water, and I’m thrilled. It’s one of the year’s best films so far and Halifax filmgoers now have no excuse to catch up with it.

The advance buzz for Deepwater Horizon, a thriller/disaster picture about the oil workers on the BP rig that blew up in the Gulf of Mexico back in 2010, has been pretty positive. I understand it lays the blame for the event on cost-cutting and safety-problem-ignoring oil executives. It stars Mark Wahlberg, Kurt Russell, John Malkovich, and Kate Hudson.

Arriving with less buzz, positive or otherwise, is a much-delayed comedy, also based on a true story. Masterminds is about incompetent bank robbers, and stars Zach Galifianakis, Kristin Wiig, and Owen Wilson.

A little Canadian drama opens a week or so after it was scheduled and then pulled from the Atlantic Film Festival: Milton’s Secret stars Donald Sutherland and Michelle Rodriguez. It’s based on the Eckhart Tolle novel, about the relationship between a bullied boy and his grandfather. I hear young Newfoundland actor Percy Hynes is especially good as the bully.

Tim Burton is back with another film in his strange little sweet spot. This one looks like an amalgam of Harry Potter and the X-Men, called Miss Peregrine’s Home For Peculiar Children. The draw for me is the incredible Eva Green as the titular Miss Peregrine.

Here’s the season’s weirdest decision by those who distribute and show feature films: Queen of Katwe looks like a total sports movie crowd-pleaser from the Disney shop, very much in the style of The Million Dollar Arm or McFarland USA, about a girl who rises from poverty in Uganda to become a chess star. The reviews have been positive, too. So, how come it’s only on a single screen in Bayers Lake?

Also opening out at Bayers Lake are a Chinese CGI-fest fantasy picture called LORD: Legend of Ravaging Dynasties (Beware the Uncanny Valley!)and a MS Dhoni: The Untold Story, a Hindi biopic about a cricketer.