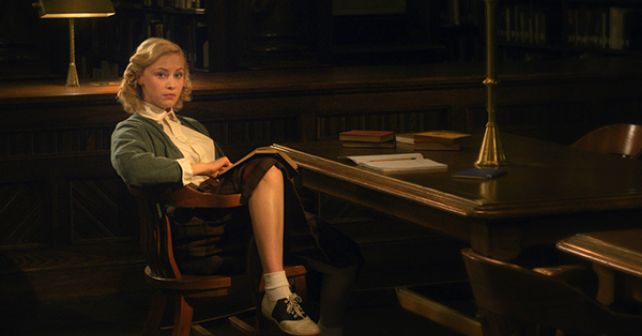 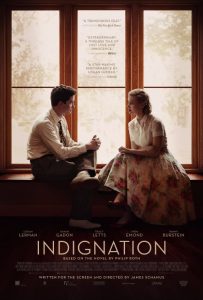 A refreshing counter-program offering in these dog days of summer, Indignation  is a literate, thoughtful, and affecting drama from a filmmaker best known as a producer and screenwriter, a creative collaborator to Ang Lee on films like The Ice Storm, Crouching Tiger Hidden Dragon, and Hulk. It’s also a career best performance from the film’s young star, Logan Lerman.

Lerman is Marcus, a young Jewish guy from Newark, New Jersey. It’s the mid-1950s and he’s off to college in Ohio. He’s happy to go: His father, a butcher, is becoming paranoid and unreasonable. To the exception of all else, all Markus wants to do is study law,. But he’s soon distracted by the presence in his classes of waspy co-ed Olivia Hutton (Sarah Gadon). When he invites her out on a date, Olivia’s emotional history and sexual forthrightness both attracts and frightens him. 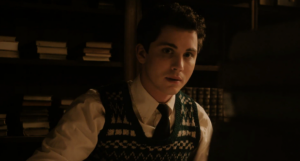 It’s no surprise that Schamus does well to bring Roth to the big screen, given his gift for wordcraft. His first feature is a small, fragile picture, and deeply melancholic, but also full of small pleasures and humour, mostly borne out of how Markus gets increasingly frustrated with the expectations of other people. Roth’s preoccupations with sex, Jewish culture, and America are well illuminated—this isn’t a stiff anthropological study but something more universal about inexplicable love and loss.

The centrepiece of the film is a 15-minute scene where the Dean (Tracy Letts) interrogates Markus about his social life and atheism. It becomes a heated debate where both parties get in some good points, though it ends in a way that neither would want.

Lerman, who has been to this place in his career mostly a pretty face in big-budget escapism, is terrific here. Markus could quickly become an irritating presence in his rigidity, but Lerman instead brings a vulnerability and warmth to the character. And Gadon, who has been a recent favourite of Cronenbergs David and Brandon, really shines. Olivia is both believably delicate and compellingly confident. It isn’t hard to understand why Markus would desperately try  to save her from the mystery of her damages.