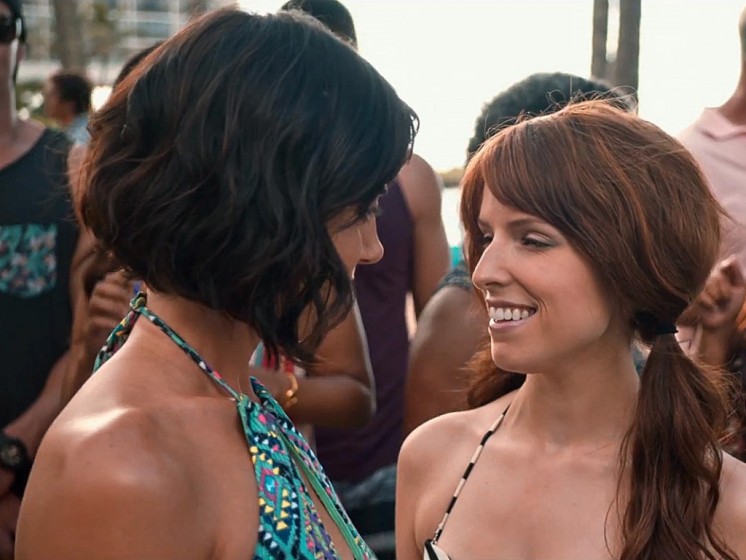 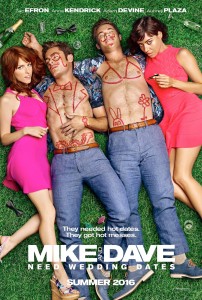 Oh, bro comedy, how I’m sick of thee. I don’t have anything personally against Seth Rogen, James Franco, or even Judd Apatow, but what you have wrought?! Endless sexist slapstickery. What drew me to this feature wasn’t the bros, though. Zac Efron and Adam Devine, whatever. But Aubrey Plaza and Anna Kendrick? Comedy gold.

Efron and Devine are actually playing brothers, Dave and Mike Stangle. They sell liquor for a living, and Dave is the slightly more responsible of the two screw-ups. Their parents (Stephen Root and Stephanie Faracy) and little sister, Jeanie (Sugar Lyn Beard), in a ridiculous  intervention, convince the bros that they ruin family events with their antics. They even have a greatest hits video collection of all the damage they’ve caused. When Jeanie gets married to Eric (Sam Richardson) at the destination wedding in Hawaii, they insist Mike and Dave get dates to take along. “Nice girls,” to settle them down.

Mike and Dave take their quest online, and attract the attention of Alice (Anna Kendrick) and Tatiana (Aubrey Plaza), both looking for a vacation, especially Alice since she was recently left at the altar. Turns out these ladies are bigger partiers than the bros, and once they get to the resort, the gloves come off.

This is deeply formulaic, high-concept comedy. The set-up is clumsy and predictable, and makes the film pretty much laugh free for the first 30 minutes. But something happens once we get to paradise: It loosens up. It feels as though the performers are given a little more leeway to improvise and push the limits, and the gags get sharper. The script also doesn’t just rely on the foursome for the laughs—Beard gets a great scene on a massage table, and Alice Wetterlund is terrific as the rapacious Cousin Terry. It’s also a story about taking personal responsibility, not the funniest of subjects, but there’s a little pathos in sudden self-awareness.

No doubt, Kendrick and Plaza are the MVPs. I don’t know if this is progress in the conservative world of mainstream Hollywood comedy,  but it’s fun seeing their characters more outrageous, more plausibly badass, and much funnier, than the boys.