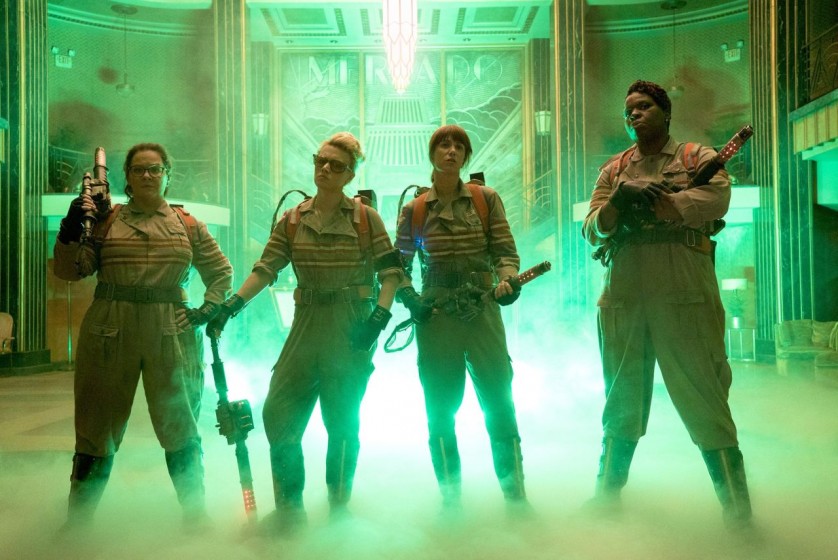 I always enjoyed the original Ghostbusters when it showed up on TV. For years it was inescapable, and as a result has become one of those universally beloved films from the 80s. The cast is terrific, and the balance between comedy and scares is great, a tone we don’t see enough of these days. But it certainly doesn’t deserve the defensive internet rage we’ve seen from a small, vocal minority of douchebags, the so-called Ghostbros, furious that the film is being rebooted with a female cast. The new movie is fun, funny, and a largely innocuous time at the movies—those bros should just STFU.

Erin Gilbert (Kristen Wiig) is a physics prof looking to get tenure at Columbia when her former buddy, Abby Yates (Melissa McCarthy), screws things up for her by revealing her past in paranormal investigation. But ghosts are suddenly showing up all over Manhattan, stirred up by a dude named Rowan (Neil Casey), looking to get revenge on the world for his being bullied his whole life—an actualized Ghostbro.

Abby, Erin, and two more Ghostbusters, Jillian Holtzmann (Kate McKinnon) and Patty Tolan (Leslie Jones, the funniest of the bunch), strap on the proton packs and get busy catching ectoplasmic spirits, with the help (?) of their thick-as-a-board but hunkalicious secretary, Kevin (Chris Hemsworth). With a cast this talented, and a not-bad script, the gags land regularly if not always on target. The energy is high, and the continuous nods to the original film are a gas, as are the many familiar cameos. The special effects have certainly improved since 1984, though overall what strikes me in the production design is how cheap everything looks. With the exception of a couple of establishing shots, it’s hard to believe that in the 30+ years since the original that the scale of a movie like this has actually shrunken.

Would the film have been better if it had been a genuine sequel rather than a reboot? Maybe. Would the various ghosts been scarier if they actually had some real intent besides just floating around and vomiting green goo? Probably. Would the movie have been improved if any character but Wiig’s had a backstory, adding a little depth and feeling to the proceedings? Definitely.

But for an amusing summer diversion, who else you gonna call?