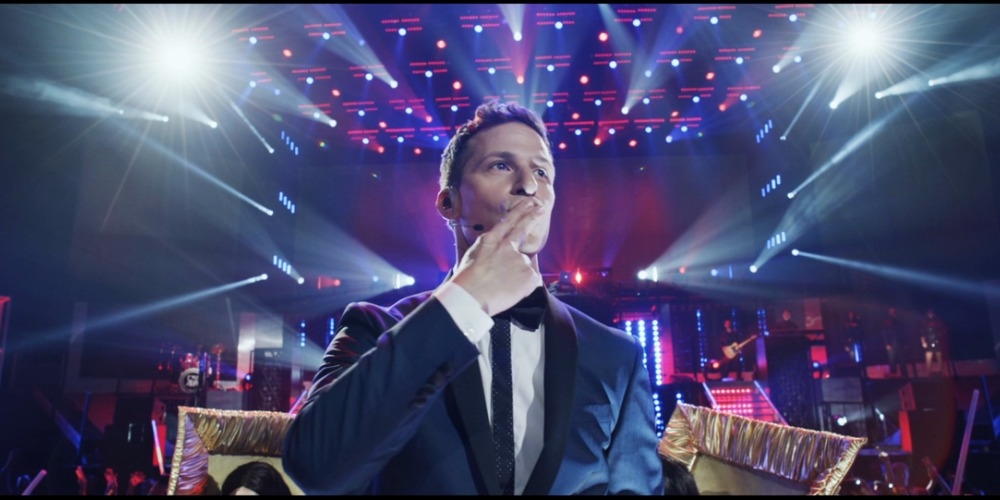 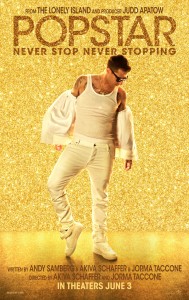 It’s a tough job, satirizing the pop music scene in 2016. It’s so shallow, disposable, and ridiculous that the funniest moments in Popstar still seem entirely plausible. Typical, even. But Schaffer, Taccone, and Samberg, otherwise known as The Lonely Island, take a solid swing at it.

Connor (Samberg) grew up with two buddies, Owen (Taccone) and Lawrence (Schaffer). They formed a rap group, The Style Boyz, like a more vulgar Beastie Boys circa Licence To Ill.  Connor and Lawrence had a falling out, largely because Connor’s an asshole, Connor then goes solo, releases a super-popular debut album as Connor4Real—beats by Owen—and the world is his. But he screws himself with the second record, getting a hundred new producers for 17 songs. 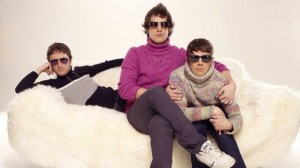 The songs are hilarious, and the straight parodies of pop image and marketing—Justins Bieber and Timberlake, Macklemore, Tyler The Creator, Drake, even U2’s free album giveaway—are targeted with drone-strike accuracy. The surfeit of ideas is a strong reminder that for many seasons the Lonely Island digital shorts were the best part of Saturday Night Live, and their absence is still deeply missed on the show, along with SNL veterans Tim Meadows, Maya Rudolph, Kevin Nealon, and Bill Hader, also amongst the supporting cast here. Pop personalities including Carrie Underwood, Mariah Carey, Seal, Questlove, and a very game Timberlake himself, all acquit themselves well.

But the pop-mockumentary format also comes with its own built-in challenges: You’re more likely to appreciate it if you both recognize and enjoy a certain amount of popular music right now, which is a strike against Popstar. Some reviewers are comparing it flatteringly to This Is Spinal Tap,  the undisputed king of the mockumentary genre, but that classic didn’t require you like British heavy metal or know any of the players in the genre to enjoy it.

Granted, you’ve got to hand it to anyone who comes up with this lyric (from “Finest Girl Bin Laden Song”).