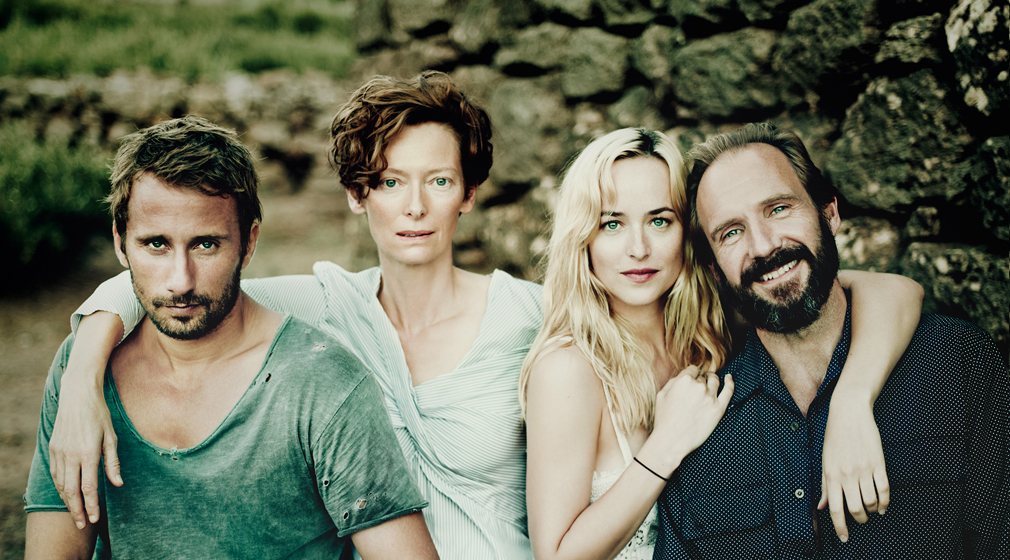 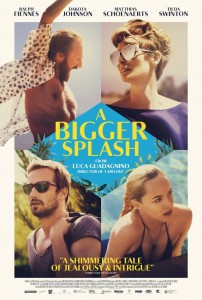 Marianne Lane (Tilda Swinton) is a rock star, an aesthetic cross between Chrissie Hynde and David Bowie. She’s just had surgery on her voice, and her doctors insist she shouldn’t speak. She and her photographer lover, Paul (Matthias Schoenaerts), retreat to the Italian island of Pantelleria, a rocky outcrop halfway between Sicily and Tunisia, where they can comfortably sunbathe in the nude at their private villa. Out of nowhere Marianne’s ex-lover Harry (Ralph Fiennes) shows up with daughter Penelope (Dakota Johnson) in tow. 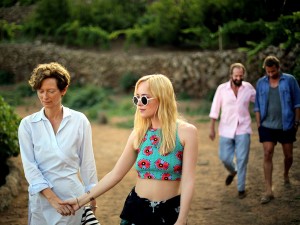 What follows is a heavily character-driven piece about louche rock and roll veterans managing the damage their lifestyle has wrought, in the most comfortable surroundings imaginable. The gorgeous landscape, the tanned bodies on display, and the human drama forgives a lot of sins. For the first half of its running time, A Bigger Splash doesn’t commit any.

Marianne is clearly frustrated by her inability to communicate, while Paul is still delicate, in recovery himself from a more emotional trauma, and doesn’t say a lot. Into the middle of this Harry is an honesty bomb, incapable of saying anything but what’s on his mind. Fiennes goes bigger than he’s done since Voldemort, dancing and singing up a storm—his story about how he helped The Rolling Stones record “The Moon Is Up,” one of the better tracks off their mostly forgotten 1990s record, Voodoo Lounge, is a mid-movie highlight, injecting some real joy into the proceedings. 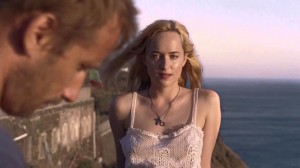 Swinton is every bit Fiennes’ match—staging a Grand Budapest Hotel reunion—and their scenes together are marvellous. Schoenaerts seems to be the go-to guy for a moody, inarticulate Euro-hunk in movies like this, The Danish Girl, and Far From The Madding Crowd, but he doesn’t show us much but the brood.

(Unlike Fiennes, who shows us everything, if you know what I mean. Goes some way to providing a little full-frontal equity in movies these days.)

Which leaves Johnson, who is fine, but her character should have been a bit of a firestarter in this crowd. Reporting from an entirely different generation, I expected her to challenge the others’ open-minded ethos, or at least reflect back to them some of their earlier-life choices and mistakes. 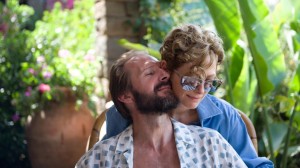 Instead, while the events of the final half hour may have a certain inevitability, they’re nowhere near as interesting or prurient as the scenario seemed to be promising. It’s a disappointment, but the road getting there, the lead performances, and a general air of trashy fun in a Mediterranean paradise holds the interest.