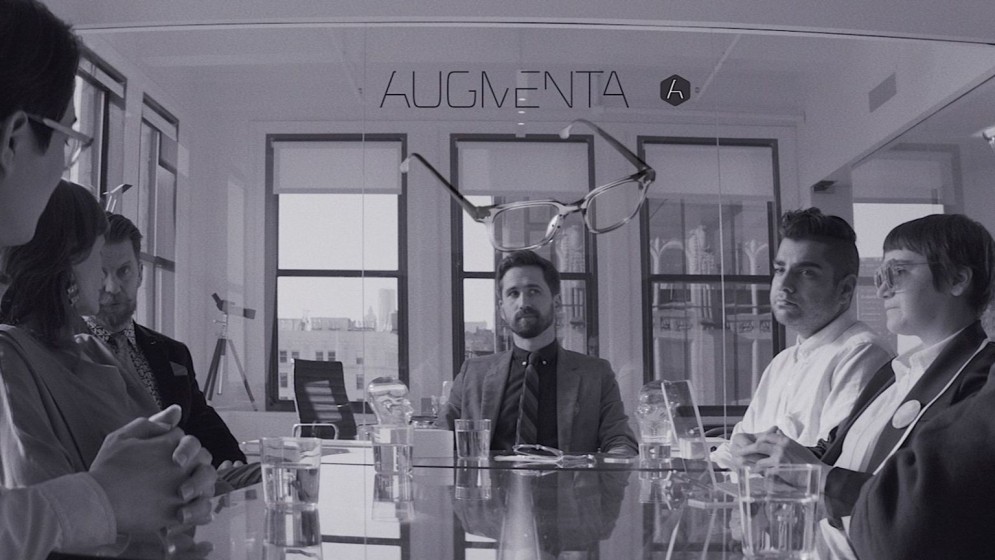 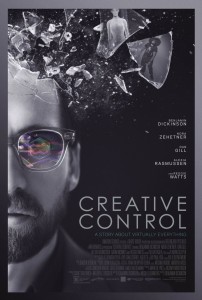 My first impression of Creative Control was that star/director/writer Dickinson is a narcotized Noah Baumbach. Not a terribly generous thought, but that’s what I was thinking.

As I went deeper into his satire of near future Brooklyn marketing creatures, creatives, and yoga instructors, shot (mostly) in an Antonioni-loving black and white style, the characters, humour, and ideas started to appeal.

Two things then occurred: The film is a take on tech anxiety akin to Charlie Brooker’s Black Mirror, less terrifying but no less astute. I also realized, this is how people must’ve felt watching the early features of Adrian Lyne, Ridley Scott, and Alan Parker, hyper-visual filmmakers who came from advertising and defined the look of the 1980s. It’s too early to say if Dickinson will have that kind of impact now, but boy, does he hit some kind of zeitgeist target with this effort.

The crux of the piece is Dickinson’s David, art director at a bright and breezy agency, test driving new virtual reality specs, a monstrous but entirely plausible next-gen Google Glass. He’s frustrated with his girlfriend, Juliet (Nora Zehetner, who I remembered instantly from her role in Rian Johnson’s Brick), while his buddy Wim (Dan Gill) is unfaithful to his girlfriend, Sophie (Alexia Rasmussen). All this is status quo until David’s designer drug problem, his obsession with Sophie, and the enabling confusion of the virtual reality glasses, collide.

It maybe never gets quite as biting as it could be, and more than once I thought Zehetner and Rasmussen should’ve switched roles, but Creative Control is fresh, funny, and forward-looking. It marks Dickinson as a filmmaker to watch. 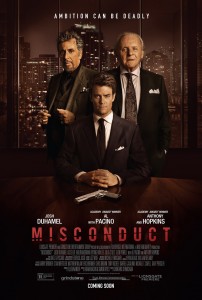 An occasionally so-bad-it’s-good potboiler, Misconduct is also frequently of the so-bad-it’s-bad variety, too.

Let’s start with the former: Josh Duhamel, best known for being a human in Transformers movies, provides just the right flavour of out-of-his-depth New Orleans lawyer for this kind of noir. He gets some key information about a dirty pharmacist (Anthony Hopkins) passed to him from an ex (Malin Akerman), which he brings to his boss (Al Pacino) in the hopes it’ll make for a big payday. But then the ex has is abducted and held for ransom.

Hopkins and Pacino, sharing a single scene, provide much of the  entertainment value, gliding through the movie on their star power and enlivening the performers around them.

Which is where the second part of that dynamic comes in: There’s a violent, omniscient mystery man (Byung-hun Lee) who keeps showing up. A gun appears in the hands of an otherwise law-abiding citizen, but in an American thriller, that can just happen, I suppose. Alice Eve and Julia Stiles also appear, both having been better in other things. And Shimosawa keeps on adding camera flourishes and pointless pans to try and juice up the material.

And when the wildly implausible double-barrelled conclusion finally arrives, the film up to then managing to skate along borderline silliness takes a dive into the ridiculous. All the Oscar-winning actors in the world can’t save it. 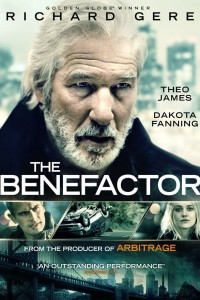 Richard Gere is Franny, a wealthy Philadelphia designer of hospitals who is very, very close with a couple (Cheryl Hines and Dylan Baker) and their daughter, Olivia (Dakota Fanning), who he insists on calling “Poodles”. The couple is killed in a car accident—Franny is in the back seat and the sole survivor. Flash forward—Franny is a whiskered eccentric and Olivia a pregnant bride (Divergent‘s Theo James is Luke, the husband). Franny, lonelier and more guilt-ridden than he lets on, wants to play the rich, supportive uncle to Olivia and patron to Luke’s career as a physician.

But so what? There’s no real conflict here.  Gere gets to chew scenery and channel Jeff Bridges in aging-hippie mode, but the younger cast are given nothing to do but react to the veteran. (Luke gets upset when Franny pays off his medical school loans. Shocker!) And when it finally becomes about the terminal self-pity of a privileged  man so desperate for prescription medication he cuts himself to get into the ER and score dope, but then has to suffer the ignominy of taking public transit to get home, it feels like the movie is playing a bad joke on its audience.

There is a far more relevant story buried here about heavy-handed philanthropy and the power of the rich. Maybe even a horror movie, doubling down on Franny’s creepy control issues. But The Benefactor never has the courage to go there. Dire and toothless. 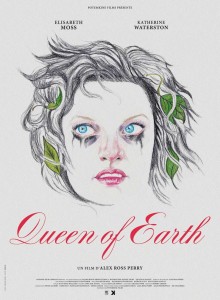 People have been talking about Perry for awhile now, especially with the positive critical response to his last film, Listen Up Philip. Queen of Earth  is powerful melodrama, evoking ’60s and ’70s European creepfests, while in its tech and fashions it could take place almost anytime in the last 20 years.

We open on Elizabeth Moss’s Catherine in the middle of a break-up with her boyfriend. He’s been cheating on her, and she’s freaking out. Worse, her depressive artist father recently died. She seeks sun-dappled refuge at the family cottage of her best friend, Katherine Waterston’s Virginia.

Cue a soundtrack heavy on subsonic throbs and discordant jags, and scene after scene of Catherine and Ginny on the verge of (and falling into) tears as they lay into each other, the intense emotional tenor compounded by the appearance of Ginny’s obnoxious pal from the cottage next door (Patrick Fugit). The golden-hour scenes of visual and aural grain are gorgeous and unsettling—the style arty, occasionally even hilariously and self-consciously artsy—but the emotional punch is earnest, the characters navigating a minefield of sublimated anger, bitterness, and dashed expectations.

Catherine is far more fragile than Ginny realizes—the former shatters on the perceived judgement of the latter. As a document of someone coming unravelled, it works from start to finish. This is unnerving stuff, but entirely worth your while.

MI-5 (aka Spooks: The Greater Good)

Directed by Bharat Nalluri | Written by Jonathan Brackley and Sam Vincent, based on the TV series Spooks created by David Wolstencroft | 104 min ▲▲▲△△ | On Netflix 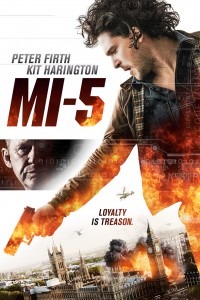 I’ve seen a handful of the episodes of the British spy TV series Spooks, otherwise known as MI-5 on Netflix, but I can’t say I really know it or its characters. Given its been running for 10 years, it must have some hardcore fans out there who are used to its pacing and plot execution. I wouldn’t go so far as saying this film is only for them, but some of its emotional impact may very well hinge on a familiarity with its characters and milieu.

For those who don’t know the source material, like me, it still manages to be a clever spy thriller, delivering a twisty, chase-filled action and a couple of surprising reversals.

Kit Harrington (who everyone knows as Game of Thrones‘ hard-to-kill Jon Snow) is former secret agent Will Holloway, drawn back into the spygame by his former boss, Harry Pearce (Peter Firth), who suspects a traitor in the highest echelons of the British intelligence service MI-5—amongst them Tim McInnerny and Jennifer Ehle—when a terrorist easily escapes their custody during transit.

Harry needs someone on the outside he can trust, though it’s a little unclear why Will would go to such lengths to help Harry given the bad blood and some vague daddy issues. Also in the mix is the charming Tuppence Middleton, an actor who ties with Benedict Cumberbatch as the holder of the most English-sounding name in show business.

MI-5 doesn’t spend much time with character motivations, it’s far too driven by its adrenalized plotting, which in this case is OK. The film effortlessly fulfills its genre requirements with slick direction—Nalluri chooses to lean heavily on gorgeous aerial views of its many London locales with a few detours to Berlin and Moscow—and a capable hand with suspense generation and a few brief, solid action sequences, somehow managing to be both expansive and claustrophobic.

I remain agnostic on Kit Harrington’s movie-carrying skills, but I can’t deny he brings what’s required of him. Peter Firth remains the movie’s unsmiling MVP.