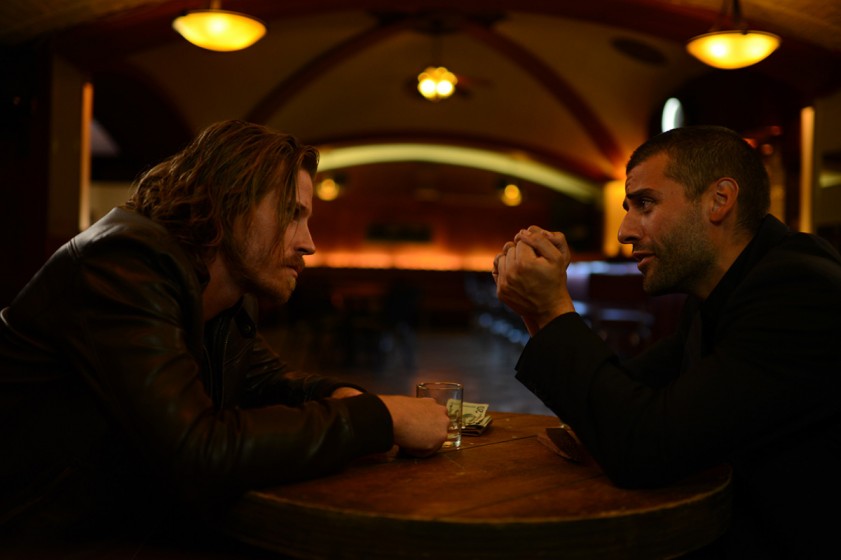 Sleeping With Other People 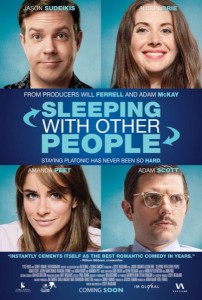 As a culture, we’re missing a lot in this time of so few romantic comedies. These kinds of movies used to show up on a regular basis, and, when they were good as this, allowed for frank reflection of our urban lifestyles and changing social mores.

Which is part of what makes Sleeping With Other People so refreshing, its novelty. You could even call it a sex comedy, an even lesser-seen romcom form.

It starts a little clunky: Jake (Jason Sudeikis, armed with turbo charm) and Lainey (always fabulous Alison Brie) meet at Columbia and take each other’s virginity. Years later they’re both sex obsessed and chronically unfaithful, so when they get chummy again they decide to keep it platonic, and for the first time in their lives they actually have a friend of the opposite sex to confide in. Naturally, things are complicated by other romances, including a guy played handily by an atypically assholish Adam Scott, Amanda Peet, and ol’ Riley from Buffy the Vampire Slayer, Mark Blucas.

The script is terrifically foul-mouthed and sharp as a tack, and Headland shoots New York and her fetching cast with a lot of style—a highlight is Brie’s ecstasy-fueled slo-mo dance instruction/self-discovery to Bowie’s “Modern Love”, stealing the song from Frances Ha— though Headland’s resistance to close-ups deprives her leads of a lot of nuanced work that could have brought more emotion to the piece.

But, for the most part, it’s a solid, adult romcom, something that would’ve been released in 1500 cinemas in the ’90s—in maybe a slightly more prudish version. People would’ve loved it. 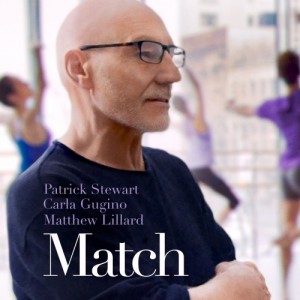 An insular drama that never gets near the escape velocity required to get free from its stage origins, it’s still essential viewing for anyone who’s a fan of Patrick Stewart. With Blunt Talk and the forthcoming Green Room, he’s doing some really interesting work right now.

Here he’s Tobi Powell, a dance instructor at Julliard. He’s flamboyant, fearless, maybe a little fey. He’s flattered by the attention of Lisa (the under-appreciated Carla Gugino), who’s writing her thesis on the history of the New York dance community. She shows up with her straight-arrow husband, Mike (Matthew Lillard, plausibly a cop), who seems to have some issues with Tobi. It won’t take you long to figure out what’s really going on when things start to get ugly.

But this isn’t a thriller, it’s just a drama that takes a few predictable turns while allowing Stewart to really get his teeth into a character we haven’t seen him play before. Gugino and Lillard are fine, though mostly they’re required to react to all the juice Stewart spills through the scenes.

And there’s plenty of juice… for those who like that sort of thing. 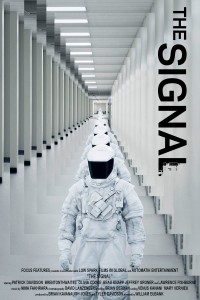 A fitfully impressive science fiction, something for fans of The Matrix, Dark City, and even, to a lesser degree, Shane Caruth’s Primer. Matrix fans will get a kick seeing Lawrence Fishburne in another honey-voiced role, this time as a scientist who shows up at the top of the second act. The first is concerned with a road trip, two buddies taking the one guy’s girlfriend (Brenton Thwaites, Beau Knapp, and Olivia Cooke, respectively) to school in California. On the way they track down a hacker, only to find conspiracy—they may have been exposed to some kind of deadly virus, or not, with much more weirdness to follow in the last 30-or-so minutes.

Eubank and his co-writers have some interesting science fiction/conspiracy ideas, and deliver on the promise of an occasionally creepy thriller. As a director, he can’t quite get a handle on the pacing or the places where the plotting crosses over into sheer silliness. And his cast doesn’t quite earn the adolescent emotional dramatics they’re asked to deliver. 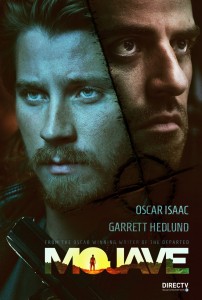 Monahan’s maybe best known for having scripted The Departed, though what drew me to this film, his second as a director, was his first, a little seen thriller called London Boulevard that I enjoyed a few years back. That pedigree, combined with this cast—Garrett Hedlund, Oscar Isaac,  Mark Wahlberg, and Louise Bourgoin (the star of the fun Luc Besson picture The Extraordinary Adventures of Adele Blanc-Sec)—raised my expectations of this dirty little b-movie.

The story concerns a spoiled Hollywood type (Hedlund) who, when taking some time for himself in the desert, comes across a very talkative and unpleasant fellow (Isaac) who follows the Hollywood type back to LA and makes him face up to his sins. Or something to that effect. Both men are irritating to spend time with, and Mojave proves that even the white-hot Isaac can’t save a movie just by being in it.

When a movie like this isn’t working, you can just feel it. We have long, pointless scenes of Hedlund’s character exploring his existential angst against the backdrop of the California desert, and we just don’t care. At one point, Isaac’s character asks whether Hedlund has figured out who the bad guy is of the two of them. Again, we don’t care. We can’t invest in either of them.

If Wahlberg, starring as a hooker-obsessed movie producer, is supposed to be the comedy relief, that’s another wrong-headed turn. Wahlberg can be funny, he just isn’t here.