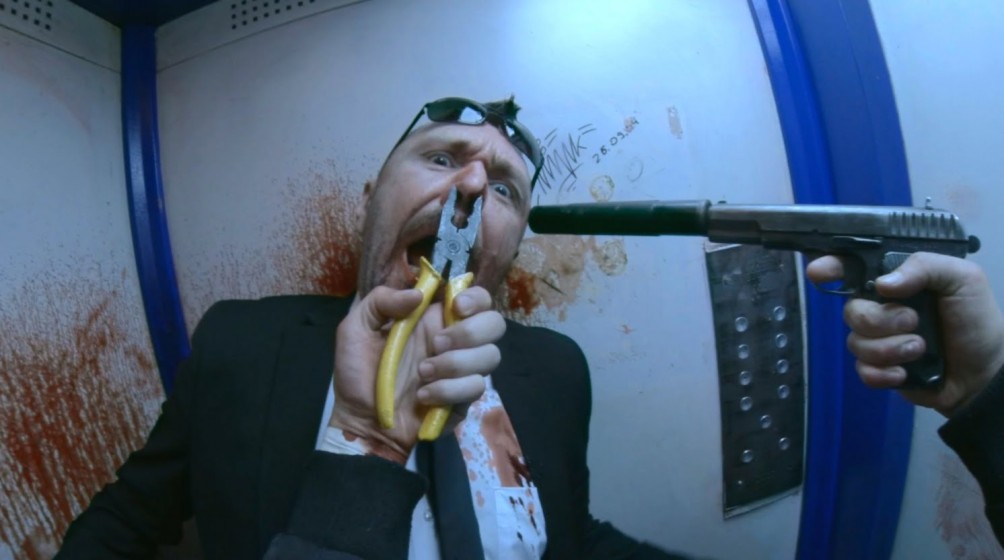 For years Hollywood’s been adapting video games into movies and filmmakers like Michael Bay and Zack Snyder have been inspired by video game visuals in their filmmaking. It makes sense that someone would try to narrow that gap between media, creating a movie that replicates the point of view-perspective of a First-Person-Shooter like Call of Duty, Battlefield, or Crysis (all of which I’ve played, incidentally).

With Hardcore Henry, that’s pretty much what you get. All the high-impact gameplay and bone-shattering, blood-gushing violence, except instead of it being interactive, you just get to watch. It’s like watching someone else play, and we all know how satisfying that is.

Naishuller accomplished this by strapping a Gopro camera onto the head of a number of daring stuntpeople. The story, such as it is, involves a fellow named Henry, a cybernetic warrior who wakes up with no memory a la Robocop, while his wife (Haley Bennett) is helping install his bionic bits. She’s promptly abducted by Russian mercenaries working for a telekinetic villain (Danila Kozlovski) while Henry, who can’t speak, gets into all sorts of trouble trying to track her down. Fortunately for Henry, he has a guide, Jimmy (Sharlto Copley), who provides helpful exposition in regular intervals to give us a break from the action, and gets killed early on but keeps reanimating. (Like a video game… get it?) I can’t deny there’s something impressively cinematic in the logistical feat of making a POV action movie, and there’s also a furious exploitation aesthetic at work here—I can see why the film might have appealed to  the Toronto International Film Festival Midnight Madness audience. Especially if they were totally hammered or really high.

But this is a movie without a thought in its head. Its effort to be self-referential and knowing is smug and annoying. At no time do you care about the silent protagonist or anyone he happens to be looking at/shooting/punching/gouging. And the plot makes next to no sense. That’s arguably because it’s aping the excuse-for-forward-motion narrative of video games, but that’s not much of an excuse for the film’s incoherence.

What’s worse, the nauseating camerawork makes every action sequence a mess. Halfway in I was praying for a little Steadicam to give my sloshing belly a break. And if the cinematography hadn’t made me sick, the casual misogyny probably would’ve. Way to distance your film from that appalling gamer cliche, you assholes.

There’s a good movie to be made from a POV perspective, but the only thing genuinely memorable about this gimmicky picture  is its effective location work in and around Moscow. Feels almost as real as Chernobyl does in STALKER.