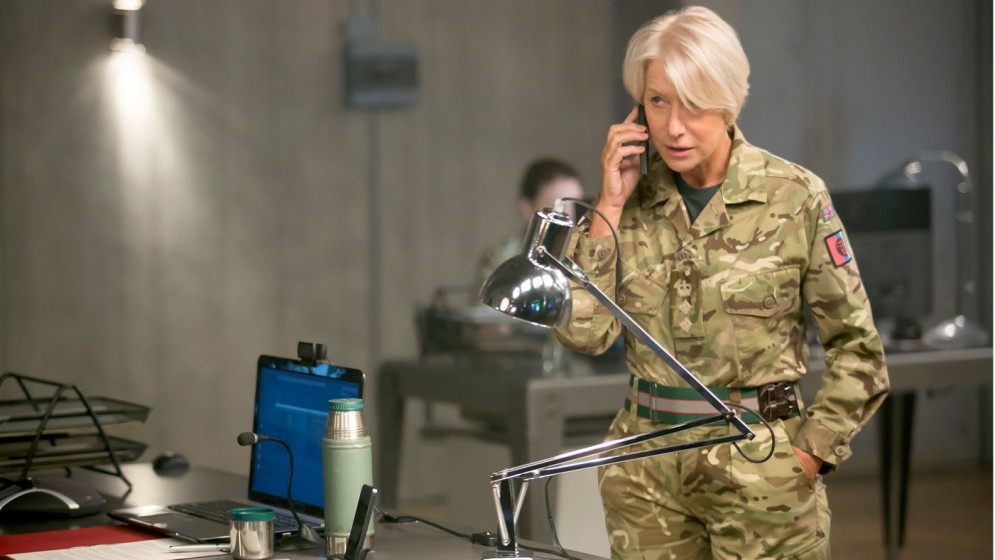 What is one little girl’s life worth weighed against the imminent death of dozens? That’s the morality play at the centre of Eye In The Sky, a clever, well-structured drama stretched taut around a single event.

Col. Katherine Powell (Helen Mirren, typically sterling) is in charge of tracking down Al-Shabaab militants in West Africa from a military base in the UK. She works in conjunction with American forces in Nevada (including Aaron Paul as a pilot), operating Reaper drones. On the ground in a neighbourhood of Nairobi, agents (including Oscar-nominated Barkhad Abdi) close in on a house where a high-level group of extremists plan a suicide bombing. We cycle between these three locations as we also get to know a family (Armaan Haggio, Aisha Takow, and Faisa Hassan) in a house beside the target, the father trying to educate his daughter despite the opinion of the fanatics whose bicycles he repairs. It’s the little girl who sells bread in the street and gets too close to the target, setting off alarm bells in Whitehall where politicians (including Jeremy Northam) and military liaisons (the late, great Alan Rickman) watch the drama unfold and debate—and defer decision-making—on what course of action to take. Despite the imminent threat of hellfire missiles raining down on the house in Kenya, the real drama takes place in those geographically removed rooms in front of computer monitors as the powers that be mull and hesitate over the choice to strike—all this while damage estimates are calculated and, perhaps, fudged, in order to get the job done. This isn’t a political screed, though you’d be forgiven for thinking the filmmaker’s message is that war is best left to the warriors rather than elected officials. The film looks OK, though it’s not terribly cinematic—it would play just as effectively on a Sunday night TV broadcast. It also visualizes surveillance technology I’m not entirely sure exists in the real world, but I do know the images provided by these (poorly CGI-ed) micro-drones wouldn’t look nearly as good as they do here. In this, that other recent drone warfare drama Good Kill has the verisimilitudinous edge, but otherwise, Eye In The Sky hits the target.