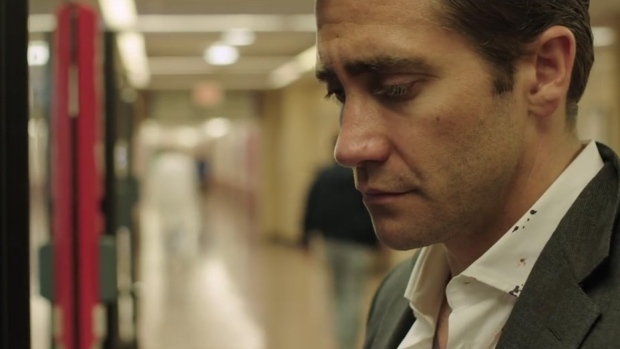 Davis  Mitchell (Jake Gyllenhaal) is an investment banker for whom everything rolls easy. He’s not hard to hate—the guy’s had everything given to him; a lovely bride, Julia (Heather Lind), a lucrative job working for his father-in-law (Chris Cooper), a great life.

But when his wife dies in a car accident. Davis barely reacts. He goes numb.

Demolition is the story of how he finds his way to his feelings, his real self, buried under layers and years of repetition and distraction. In some ways the film is an ode to mindfulness, to leaning in, and to coming to grips with grieving.

When Davis can’t retrieve a bag of M&Ms from a vending machine, he writes to the company to complain, explaining his whole sad story to their customer service department of one: Karen (Naomi Watts), who is touched by what she reads, and reaches out to Davis, creating a tenuous human connection between them. This quirk-filled script could easily go twee or irritating in a Hollywood high-concept way, but it never does in Vallée’s hands. It never feels anything less than authentic because that’s the cinematic language he speaks. Demolition is even closer to his more personal, early work, like CRAZY and Cafe De Flore, than his more recent Hollywood films Dallas Buyers Club and Wild, but that’s to its credit. You never really know where Davis will go with his personal revelations, or how his need to deconstruct everything around him, physical and otherwise, will end up. Is the connection between Davis and Karen romantic, or something else? And what role will Karen’s teenage son (Judah Lewis) play in his life?

Nothing about this feels formula, and that’s what makes it work. It’s meandering, and unexpectedly moving.

As usual, one of the things Vallée does unerringly is move between the current day and the past, inserting little moments of flashback within scenes, perfect fragments of time shifting. Another thing worth recognizing is his gift with using music. Heart’s “Crazy on You,” and Free’s “Mr Big” are two musical signposts that become part of the heartbeat of the film.