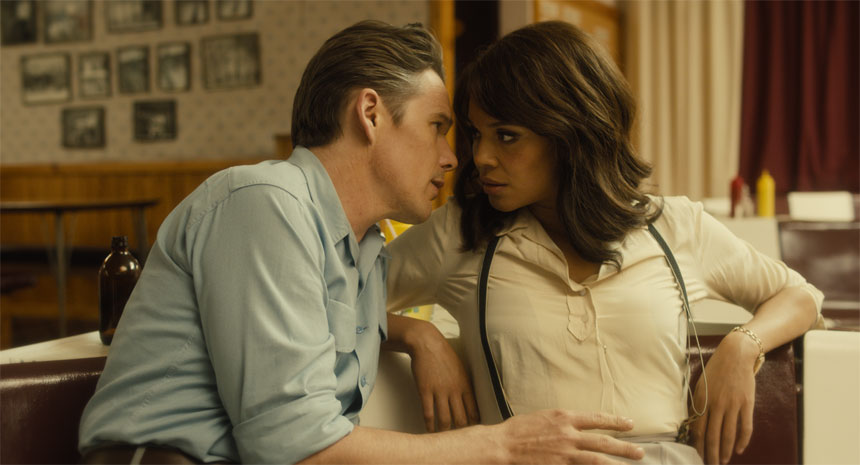 I’ve come to the end of my patience with the conventional musical biopic.

It takes some directorial imagination to upend the cliches and do something fresh in the genre, as Bill Pohlad did last year with a dual narrative in the Brian Wilson picture Love & Mercy. Born To Be Blue misses that note.

The story of Chet Baker is told offering periodic flashbacks in black-and-white, the meta-conceit being that those scenes were shot for an abortive 1960s biopic where the jazz trumpeter played himself. It’s not because the concept doesn’t have some traction, but the execution is flat. This is one of the dullest looking features I’ve seen in ages, with those  dreary hallmarks of low-budget Canadian features we don’t like to admit to, from the lighting to the locations—funny how Oklahoma looks so much like Ontario.

This is compounded by a tale told once too often: The brilliant but insecure musician stymies their gift with uncontrollable appetites, either sex, drugs, or some combination of the two. They fall apart, then stage an unlikely, against-the-odds comeback later in their career. Or die young. What makes Born To Be Blue watchable are the flashes of chemistry between Ethan Hawke (in the lead) and Carmen Ejogo (Baker’s love interest and his ex-wife in the flashbacks, a dual role that diminishes her specialness in both parts). Their rocky romance holds the interest as Baker attempts to steady his career through his addiction, an occasional beating, and his past catching up to him. He gets a helping hand from a former manager —played by the always reliable Callum Keith Rennie—and he detours back home to face his disgruntled father (Stephen McHattie, who played Baker in a short film from the same director).

Since leaving his youth behind, Hawke has become an actor with dramatic heft. A curmudgeonly Miles Davis (Kadar Brown) offers Baker some advice: “Come back when you’ve lived a little.”  You can see Hawke’s living on his face. He gives the picture the weight it has.