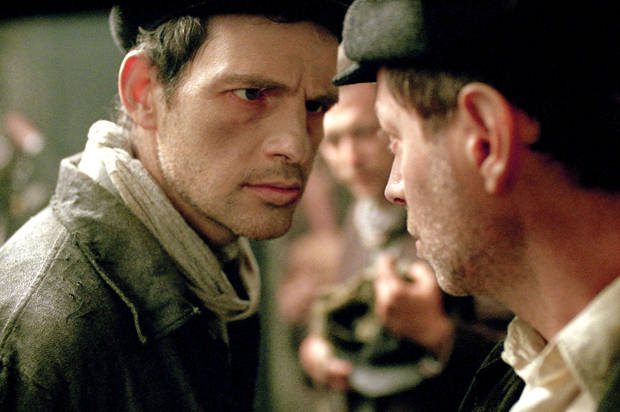 The Sonderkommando were the prisoners in Nazi concentration camps chosen to help administrate the dealing of death—organizing victims for the ovens, rifling through their belongings for valuables, disposing of the bodies—all to delay their own extermination by a few short weeks. Nemes’ feature debut is about one of those men, Hungarian Jew Saul Auslander (Géza Rörhig), who in the application of his work, finds a boy who he thinks is his son. All he wants to do is bury the boy’s body, and find a rabbi to say the Kaddish. This grim, quixotic task, gives him just a drop of meaning for a life in hell. Everyone around him is grasping and gnawing, planning escapes or trying to document the horror with secret cameras or hidden writings. There’s no room for kindness in this world, and barely time for solidarity.

This film is the ideal marriage of form and content. Nemes shoots almost the entire film in shallow focus close-up—the opening shot blurry until Rörhig walks into the frame— and in a restrictive 4:3 aspect ratio, all of which creates a diabolical sense of claustrophobia.

We’re used to seeing much more of the image, where this formal approach forces us to pay more attention to the sound design, and those sounds are powerful. So much of Son of Saul exists outside the image, and those times where the film provides a little depth to a scene, a background in focus, the horror is almost too explicit to bear. It also feels like it’s shot in real time, adding to the sense of despair and desperation.

It’s not a perfect film. There are moments where the acting feels theatrical, where the brilliance of the direction can’t obscure a certain roughness. But there again, the shallow focus allows for a lot of leeway with the sets and background cast, hiding budgetary constraints.

Rörhig communicates the kind of existential exhaustion where only the most essential expressions are possible, a stone-faced facade that hides all the hurt in the world.

It’s hard to imagine a Holocaust drama providing a more palpable sense of verisimilitude. Go with someone to hug afterwards.

Son of Saul opens on Friday, January 29 in Halifax.