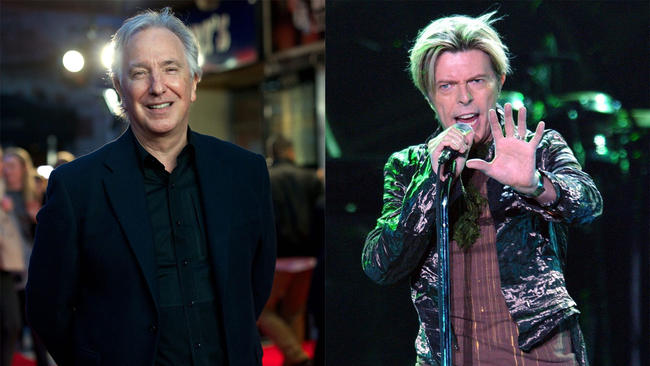 It’s been a rough week, absorbing the news that actor, writer, and director Alan Rickman, and creative icon David Bowie, have died. Both were 69.

A Shakespearean thesp in the UK, most audiences in North America were introduced to Alan Rickman with the one-two punch of Die Hard (1988) and Robin Hood: Prince of Thieves (1991). He’s remarkable in both action movies, elevating what could have been moustache-twirling cartoon villainy to something much more memorable.

In the former Rickman is the magnetic Hans Gruber, more than a match for Bruce Willis, and in the latter as the Sheriff of Nottingham, he steals the film wholesale from Kevin Costner, the dullest Robin Hood in movie history—though the picture still holds up as blockbuster entertainment. 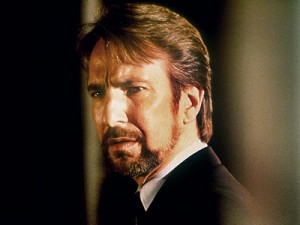 What I will remember most fondly about Rickman’s presence was his distinctive drawl, that voice delivering the most distinct line readings. It was often put in aid of sinister characters saying nasty things, but he could also do an incredible vulnerability. 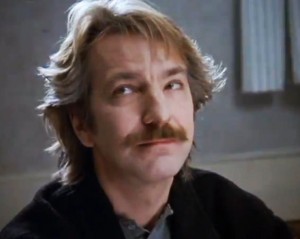 One of his best ever roles was in a picture I saw in New York City in the summer of 1991 called Truly, Madly, Deeply. I’ve written about it elsewhere on this blog. It’s one of my very favourite films, the first feature from Anthony Minghella, who went on to Oscar triumph with The English Patient.

Rickman plays Jamie, a ghost who haunts the apartment of the lover (an astonishing Juliette Stevenson) he left behind when he died unexpectedly, though it’s a movie almost entirely without a supernatural vibe. It’s more a melancholy romance about learning to let go.

I remember Rickman’s staunch presence in the incest drama Close My Eyes, which also featured a young Clive Owen, as well as his starring roles in the biopics Rasputin and Mesmer, and his hilarious turn as the angel Metatron in Kevin Smith’s Dogma.

He was terrific as the very respectable Colonel Brandon in Ang Lee’s Sense and Sensibility, as the straying husband in Love Actually, the wine expert in Bottle Shock, and the voice of the caterpillar in Alice In Wonderland. Science fiction fans will recall his anchoring the fantastic Galaxy Quest.

Probably his most famous role was that of Severus Snape in the seven Harry Potter movies. If that was all he’d done his cinematic legacy would be secure, but he still found time to direct a couple of features: The Winter Guest from 1998, which remains unseen by me, and A Little Chaos, from 2014.

I caught up with A Little Chaos this week. It’s an interesting amalgam of historical drama, romance, and character study, about a gardener (Kate Winslet) who is contracted to help create an element of the famous gardens at Versailles for Louis XIV (Rickman) under the lead of an imperious landscape artist (Matthais Schoenaerts). She’s a widow carrying a lot of guilt, and as we go along her tragic past is gradually revealed.

There are parts of the film that feel stiff—I wasn’t entirely convinced of the time period—and the narrative tone shifts wildly. But the performances make it worth seeing and sticking with, and every few minutes there’s another gem of a scene that feels totally authentic, like when Winslet and the King meet cute in the garden and bond over their love of perennials, or when Winslet is welcomed into a secret room in the palace by Jennifer Ehle, where the women of the court meet and discuss their personal challenges away from men. 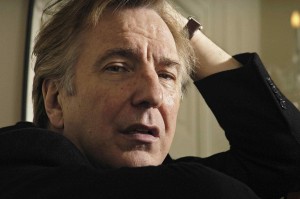 I’m going to miss Alan Rickman’s presence in movies, but recommend any of the films above to those looking to spend some time getting to know the wealth of what he’s left us.

Here’s a relevant cartoon in this week’s New Yorker.

With David Bowie, given the mandate of Flaw In The Iris to discuss film, I wanted to give a tip of the hat to a few of the chameleonic musician’s cinematic excursions.

As such a recognizable performer, he brought with him to his film roles a certain kind of cultural  baggage, though he chose those roles cannily.

His first prominent feature part was in Nic Roeg’s ’70s arthouse picture The Man Who Fell To Earth, where he played an alien. Some might consider that typecasting, though I’d argue he was even more in the pocket as a stylish 1980s vampire opposite Catherine Deneuve and Susan Sarandon in The Hunger. He was also excellent in the prisoner-of-war drama Merry Christmas Mr Lawrence, which can be counted amongst Stalag 17 and Bridge Over The River Kwai as one of the genre’s best.

He really shone  in cameos, injecting just a little bit of his patented strangeness into the features he was cast, even when he was playing other, highly recognizable characters: In The Last Temptation of Christ he’s Pontius Pilate, in Basquiat he’s Andy Warhol, and in The Prestige he’s Nicola Tesla, and he’s great as all of them. 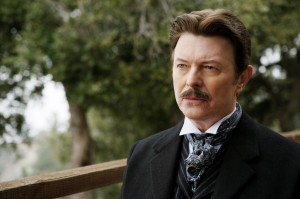 A real hidden gem of a movie is 1985’s Into The Night, starring Jeff Goldblum as an insomniac who gets caught up with Michelle Pfeiffer, a woman on the run from gangsters. It has that uneasy Los Angeles cocaine jitter, and Bowie shows up as a hitman. Which seems about right. 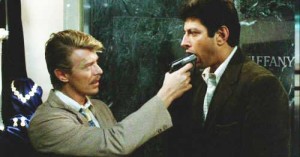 It was many a kid in the 1980s who had their dreams haunted by David Bowie as The Goblin King in Labyrinth, the wonderful fantasy feature. That he inveigled his way into the subconscious of moviegoers through this character makes all kinds of sense to me. 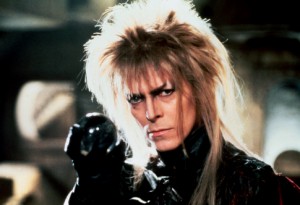