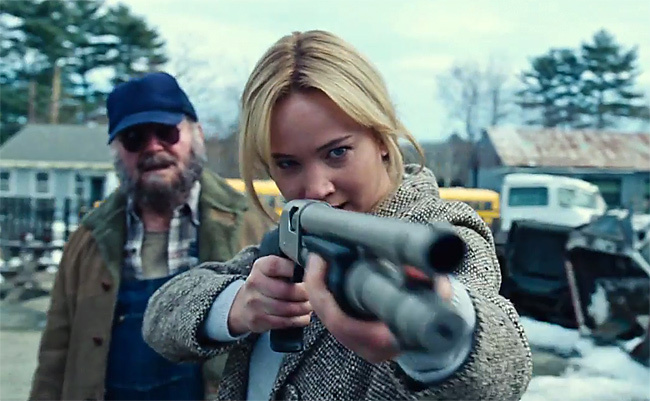 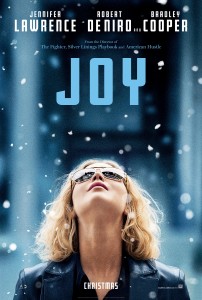 Going back to his 1996 comedy Flirting With Disaster, I’ve admired Russell for his haphazard auteur style, a precarious balancing act between narrative messes and the inspiringly brilliant. Of late that ragged creativity has produced the excellent Silver Linings Playbook, but more recently we’ve seen the deeply flawed American Hustle, a con-artist film with no confidence.

Happily, Joy is somewhere in between, but closer to the former—another challenging cinematic journey from a filmmaker who refuses to choose conventional ways to tell sometimes conventional stories.

Here he takes on the tale of Joy Mangano, the inventor of the Miracle Mop, who made her fortune from a combination of ingenuity and old-fashioned American showbiz razzle-dazzle on shopping TV. Russell uses the truth as a diving board, heavily fictionalizing Mangano’s history to try and provide a more universal story of a “daring woman.” 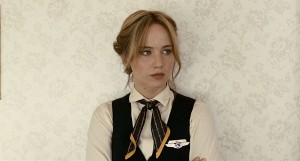 We open on a black and white soap opera, a conversation between two women from an oblique angle. It’s not long before we see the same scene again from inside the drama. This is Russell’s self-conscious approach, telling us we’re getting an American soap, that most cliched and overwrought format, melodramatic to the point of comedy. Joy won’t let you forget it’s utterly artificial as it teases out a true blue tale of business success.

Russell chooses his frequent collaborator, the most magnetic and celebrated American actor of the moment, Jennifer Lawrence, to be Joy. She’s typically astonishing as the calm centre of a cartoonishly chaotic family: She’s raising two kids, taking care of an emotionally traumatized mother (Virginia Madsen), a love-addicted father (Robert De Niro) who’s falling for a wealthy widow (Isabella Rossellini), and an ex-husband (Edgar Ramirez), while being regularly antagonized by a jealous half-sister (Elisabeth Rohm).

Only her best friend from childhood (Dascha Polanco) and her grandmother (the forever awesome Diane Ladd, also narrating) support her. We also cross paths with another Russell regular, Bradley Cooper, as the guy who helps get Joy’s invention on television. 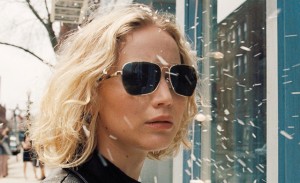 Russell’s also in the habit of borrowing heavily from other American filmmakers. It may be the presence of Ladd and Rossellini, but you can’t help but think of David Lynch as he shows the green envy and blue velvet criminality behind the white picket fences. A third act scene in Texas feels like something out of a Coen Brothers movie, Russell’s filmmaking peers also fascinated by their nation’s ethical underbelly. And the choice of Cream and the Rolling Stones on the soundtrack evoke Scorcese in all the best ways.

Even with these homages, this is a patently uneasy, awkward Russell ride, especially at the start. About a third of the way in it turns a corner, Joy’s growing conviction in her work and especially Lawrence’s powerful charisma is a warming flame to the story. By the film’s end, everything glows from it.