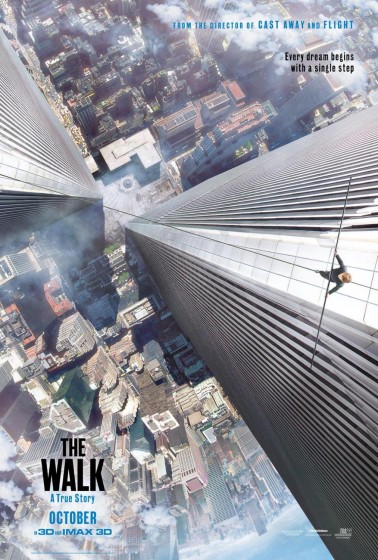 Directed by Robert Zemeckis | Written by Zemeckis and Christopher Browne, based on a book by Philippe Petit | 123 min

Unlike last week’s feature release, Pawn Sacrifice, where the historical drama compared unflatteringly to a more comprehensive documentary (Liz Garbus’ Bobby Fischer Against The World), The Walk distances itself from James Marsh’s brilliant and Oscar-winning Man On Wire by taking a more whimsical approach. The story softens or omits some of its hero’s sharper, more unpleasant character traits, and certainly doesn’t manage the emotional complexity of the doc, but the effort to veer away from the realism of the earlier film serves it well—it feels more playful and probably more kid-friendly as a result.

We meet the famed French wire-walker Philippe Petit (Joseph Gordon-Levitt, his accent and actual French not as bad as you’ve heard) narrating his own story from a fourth-wall-breaking vantage point on the torch of the Statue of Liberty, setting up his World Trade Centre-spanning intentions from his days as a street performer in Paris, collecting accomplices (including Clément Sibony and Quebec-born Charlotte Le Bon) and training with circus veteran Papa Rudy (Ben Kingsley). 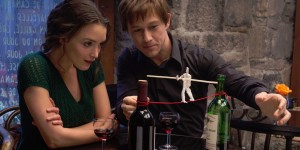 Interestingly, the effective heist-like structure of Man On Wire is nowhere near as suspenseful here, but that’s probably because Zemeckis wants the big emotion for the swooping 3D of the walk itself. It doesn’t disappoint. Zemeckis, always comfortable with wide-screen FX in films like Contact, Beowulf, and Flight, here digitally recreates the twin towers with stunning, virtiginous accuracy. 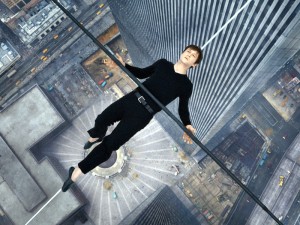 A few of the liberties taken with the facts are reasonable, some aren’t. The strategy to add a bleeding foot, a circling helicopter, and the warning of an oncoming storm, all seem a little cheap. But the film’s eye-pummelling visual scale and wizardry forgives many sins. Petit’s dream, however insane on its surface, made for an unparalleled human achievement. The movie helps confirm it, with an added homage to the memory of the buildings themselves.

(Of course, had Petit fallen, it would be an entirely different story.)