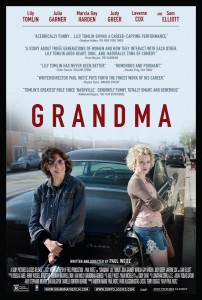 Elle is the world’s coolest grandmother. She’s tattooed, she swears, she’s a poet, an out lesbian, and drives a 1955 Dodge Royal. When granddaughter Sage shows up on her front doorstep looking for money for an abortion, you know Grandma’s gonna be crotchety, but she’s gonna do the right thing and help her.

There’s not much more plot to speak of than that. Elle and Sage spend the day together, driving around LA while scraping together money for the procedure, with Elle trying to shake off the pain of having just broken up with her much younger girlfriend, Olivia, for reasons that will become clear later. Their paths cross with an ex-husband of Elle’s, Karl, and Sage’s mother, Judy. 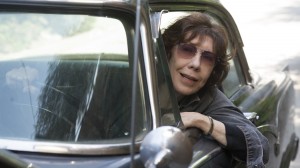 The material starts slight, but with a growing potency through the concise run time largely the result of perfect casting: Lily Tomlin in the lead has a career role, and Sam Elliott’s Karl is a single-scene powerhouse, shockingly sans ‘stache.

Judy Greer as Olivia has at least one moment that might be some of the best work she’s done—the “footnote” scene early on. As Judy, Marcia Gay Harden is typically stellar—more time with her would have been welcome—and Julia Garner (who fans of The Americans will recognize) has an authentic presence as Sage that’s very hard to fake.

Politically, it’s sensitive, while managing to be poignant, funny and sweet, without resorting to easy sentiment.