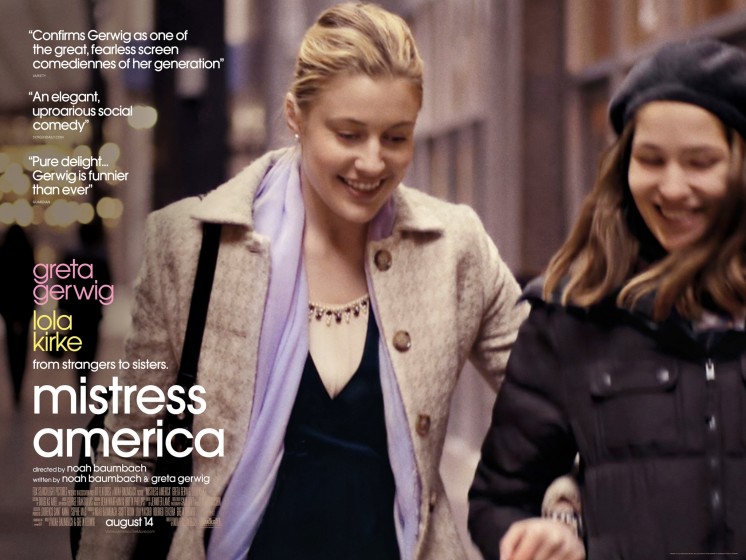 A return to the frenetic, shallow Manhattanites Gerwig and Baumbach served up in Frances Ha, there’s something to celebrate in these New York stories, if only as unique takes on the relationships between young women in the big city.

Gerwig stars as another self-absorbed dreamer, bouncing off a less or more evolved version of herself played by the scion of a rockstar (Mickey Sumner in Frances Ha, Lola Kirke here). Their parents are to be married, which is enough of a reason for college lit major Tracy (Kirke) to call professional socialite Brooke (Gerwig) for a Times Square hang out. Despite more than a decade between them, they connect effortlessly, Tracy worshiping Brooke while also borrowing her character as inspiration for her fiction. As I always say, there’s nothing more subjective than comedy. Baumbach and Gerwig’s modern screwball renders next to no laughs in me—just a passing appreciation of comedic non-sequiturs passed off as a version of how people actually speak—which makes it feel like a poor cousin to spiritually similar but more daring material like Lena Dunham’s Girls, co-starring Kirke’s sister, Jemima.

But Gerwig and Kirke are so winning they gradually draw out our affection, so by the end we genuinely care for them. That’s saying something, especially after a stultifying middle bit where Brooke pitches a wealthy ex-boyfriend to invest in a restaurant and the picture skates awkwardly into farce.

How much fun would it have been if Brooke was a Tyler Durden, a product of Tracy’s imagination? Maybe in Baumbach and Gerwig’s next picture.