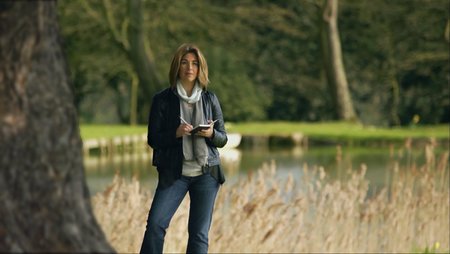 I enjoyed a likely to be final day of summer lakeswimming and sunbathing before finding my way to Park Lane for the arrival of director Patricia Rozema and producer Niv Fichman. Before they presented the screening of their film Into The Forest, I had a chance to chat with Rozema, and found her to be a totally charming.

I chose not to see the film a second time in a week, and instead went into the screening of a local film. I missed the beginning, but I was impressed by what I saw: The story of a hockey phenom from Dartmouth who gets scouted by the NHL, the film is the second urban drama I’ve seen at this year’s AFF to tackle the thorny issue of race (along with Noon Gun) in the region.

Matty (Stephan James) is African Nova Scotian, which means he feels twice the pressure to keep his nose clean and work hard, knowing he’ll be getting a shot at a future in a sport loved, and largely played, by white people. But this isn’t really a sports movie.

Matty’s brother (Shamier Anderson) is the family hardcase, making wads of cash as a pimp, while their mother and father look on in disapproval. We spend time at the local high school, a powder keg of attitude and tension, with a girl (Sarah Jeffery) struggling with her identity, racial and otherwise, while caught between the attentions of Matty and another boy (Steven Love).

I’m a little hesitant to heap unadulterated praise on the film having walked in late, but my feeling about it was very positive. The performances across the board were nuanced, the shooting was spare, and the script surefooted. Kane has years of experience as a screenwriter, having helmed the short-lived drama North/South, and this piece, inspired by the Cole Harbour District High School riot of 1989,  has an ease that comes from experience.

The most fully realized feature I’ve seen from the local industry this year. I hope more people get to see it.

My plans to see Green Room were scuppered by its postponement, so instead I went to… I admire the politics, intent, and message of this documentary, but still feel mightily ambivalent about it.

Klein narrates, starting with a confession: she doesn’t really like climate change docs, nor does she feel much when she sees the climate change spirit animal, the polar bear. Quel controversy! This promises a new take on the genre. Yay!

Her thesis is climate change isn’t caused by our human nature, it’s here because we have created a capitalist system that treats nature as a machine, a beast to be conquered, its treasures inexhaustible. That approach, she suggests, can be changed by adopting the attitudes of indigenous cultures who respect the land. Sounds reasonable.

Then we get Klein globetrotting, from Fort McMurray to Montana to New York, from Greece to India to China, all in aid of the grassroots movements fighting against the global energy and resource management industries. That’s great, but repetitive, and occasionally a little dull, punctuated by an over-reliance on drone aerial shots and too little focus on the individual.

We’d like a fresh approach that, despite the promises, the film doesn’t deliver.