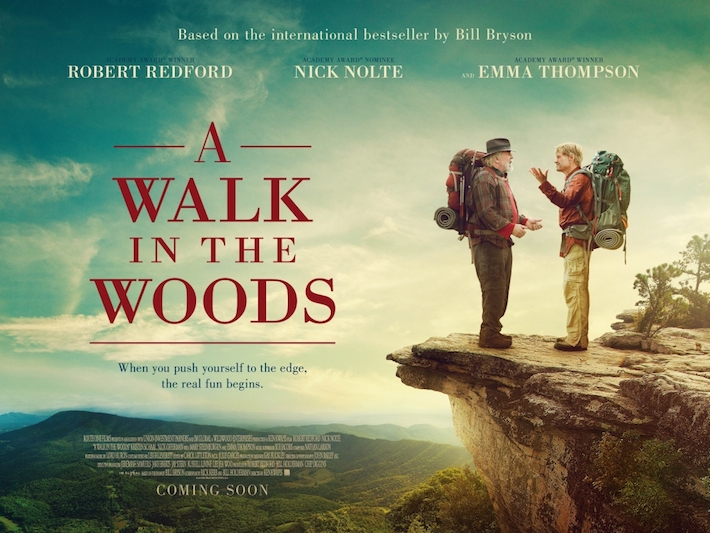 Directed by Ken Kwapis | Written by Rick Kerb and Bill Holderman, based on a book by Bill Bryson, and an earlier screenplay adaptation by Michael Arndt | 104 min.

Just as there is comfort food, there are comfort movies, which is what A Walk In The Woods does its best to be. When it works it’s thanks to the lived-in. rumpled charm of its leads, two Hollywood veterans who’ve gone from dashing leading men to grizzled elders, their lives carved into their faces. 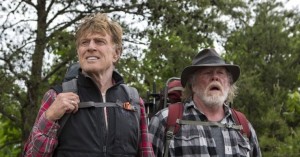 Robert Redford plays famed travel writer Bryson as a curmudgeonly intellectual, at the age where his friends and acquaintances are dying. A shout against the fading light, he decides to walk the Appalachian Trail, more than 2,000 miles of woodland hike. His concerned wife (a few days work for Emma Thompson) insists if he must go, he needs an accompaniment. A crusty frenemy from the old days, Katz (Nick Nolte), joins him on the journey.

It’s not without event. They survive shitting in the woods, snowstorms, bears, incredibly irritating fellow hikers (Kristen Schaal, FTW), violently jealous husbands, vivacious motel owners (Mary Steenburgen), and even each other. It’s lively and frequently funny stuff, but for a second it looks like the movie will go deeper, genuinely exploring philosophies of life, death, and time’s passage, venturing into Wild territory. But only for a second—it returns to the well-trodden path of senior jokes and mountainous scenery, director Kwapis’ (Big Miracle) dramatic choices unerringly pedestrian.

This is the first time I’ve noticed this but I’m sure it won’t be the last: The movie suffers from an over-reliance on drone cinematography. It makes it feel like a cottage hunter show on HGTV.

An unexpected twinge of nostalgia comes when Bryson and Katz are stuck on a cliff edge overlooking a raging river. You can’t help but think of Butch Cassidy and the Sundance Kid, and that Paul Newman was originally slated to be in this opposite Redford. No disrespect intended to the terrific Nolte, but that might’ve really been something.