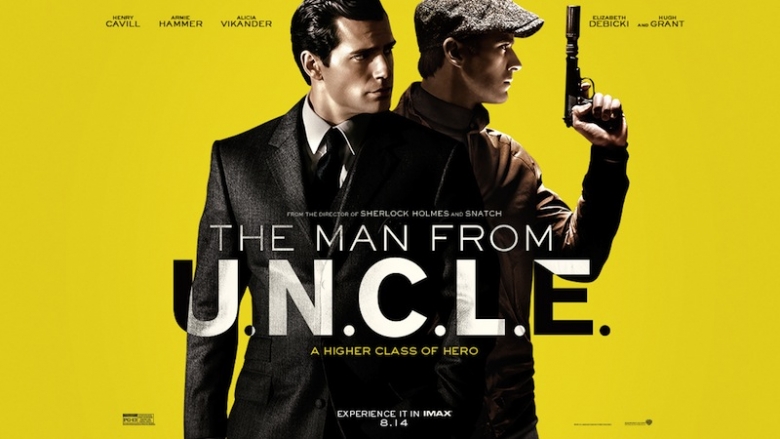 Directed by Guy Ritchie, Written by Ritchie and Lionel Wigram, from a story by Ritchie, Wigram, Jeff Kleeman, and David C. Wilson. Based on the 1960s TV series created by Sam Rolfe

In the lowest-common denominator landscape of the summer blockbuster season, with every feature pre-masticated and audience-tested for the broadest possible appeal, it’s easy to get pissed off at sameness in the movies.

Then something like Guy Ritchie’s newest film comes along, an explosion of style. So much care has gone into the appearance and sound of the thing that even though the narrative and some of the performances are a little slack, the film fairly pops off the screen to tickle the eyeballs.

There’s definitely room in my summer schedule for what The Man From UNCLE is selling. 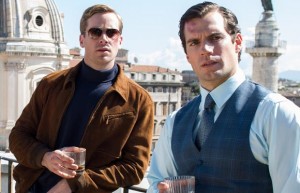 Last week I borrowed a couple seasons of the TV show from the library. The first thing I noticed was that an “hour” of network TV back in the 60s was more than 50 minutes. We put up with a lot more advertising these days. I also found the show to be a fairly relaxed, playful entertainment; the forever cool Robert Vaughn and David McCallum are the American and Russian spies, respectively, working for an international security agency. As it goes along it gets pretty silly, takes a step toward Get Smart and away from Mission: Impossible.

One of the things that genuinely distinguishes the new movie from the recent film version of Mission: Impossible is the decision to have it set in the early 1960s. Brilliant idea. This isn’t the grey, kitchen sink 60s of a John Le Carré adaptation, it’s the bouncing, Swinging Sixties of go-go boots, designer clothes, bossa nova, and glossy fashion magazines. 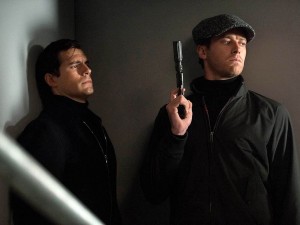 For better or for worse, it feels as though the leads have been cast for their genetic gifts and fashion plate looks than any special chemistry, wit, or acting chops.

Brit Henry Cavill (our most recent and serious Superman) plays American spy Napoleon Solo, a professional thief blackmailed into working for the US government. He’s been sent across the wall to East Germany to find a mechanic, Gaby Teller (played by a Swede, Alicia Vikander). Cue a terrific Trabant chase through East Berlin. I recognize those words have never before been written in human history. Also on assignment to collect Gaby is Illya Kuryakin (played by American Armie Hammer), a driven and temperamental Russian spy.

Gaby’s father, a nuclear scientist, may be developing a new, more efficient bomb with some bad people, Victoria (Elizabeth Debicki) and Alexander (Luca Calvani), down in Italy.  Solo and Kuryakin must work together to foil this plot that threatens both their countries. They must all hang out in sunny Rome and Naples, drink cocktails, and rub elbows with the louche and wealthy to do it.

As they did so often on the TV series, they rope in ordinary people to play their spy games: hence Gaby pretending to be married to Kuryakin, cover for their investigation of Victoria and Alexander’s work. Naturally, there are secrets, betrayals, and reversals, all while the leads flit around in the most dapper tailored suits. 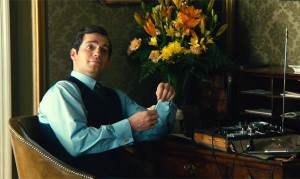 More so the shame that this dynamic duo is so stiff and on the nose. Cavill is passable thanks to the script giving him a lion’s share of rejoinders, but he never relaxes in the role. To be truely suave and debonair you have to own it, and too often it feels like he’s trying too hard. Meanwhile, poor Hammer just gets to alternate between stuffy and angry. I think it’s time to admit that whatever his gifts as an actor, Armie Hammer is no movie star. You can tell when Hugh Grant shows up—try and watch anybody else but him. His effortless magnetism throws shade on those other guys. 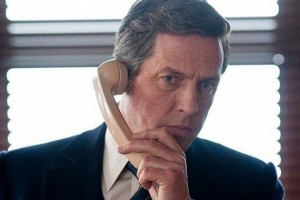 Fortunately, the female leads could hardly be better. With this and Ex Machina, Vikander as genuinely arrived as a serious talent on screens this summer, and Debicki has a delicious Cruella de Ville quality to her. 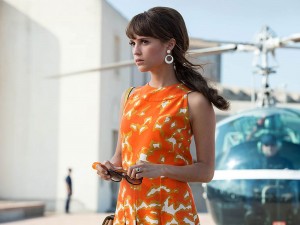 The story doesn’t do the actors a lot of favours. It’s especially leisurely and low-stakes in places, which if fine, and I get that it’s aping the pace and approach of the spy thrillers of the 60s, but “thriller” would be a stretch as a descriptor here.  There are precious few thrills.

The biggest support the cast gets is from the production design. I dig the way the movie sounds, looks, and feels. Its split-screen playfulness, throwbacks to early Bond movies, along with attractive helicopters, jeeps, and jewellery, and a general inclination to having fun is what makes The Man From UNCLE worth watching.

It’s one of those times where style over substance is totally OK. Mostly because there’s really not a lot of substance.

You can tell because there’s a moment when the movie tries to get heavy in a torture scene, and it totally doesn’t work. It’s like the scene has been accidentally spliced in from another kind of movie. Then, five minutes later, we get a big laugh at a Nazi who fries himself in an electric chair.

It could be that a surfeit of summer sun and movies like Pixels and Fantastic Four have fried my brain, but I’m gonna say the burning man in the ancient electric chair is a great gag. That’s what I call payoff.

The Man From UNCLE opens Friday, August 14 in Halifax