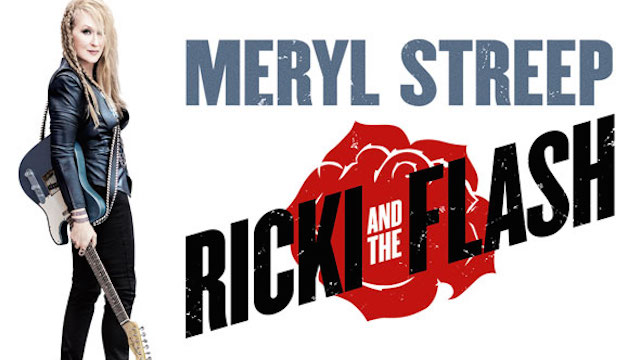 Meryl as a rocker. What’s not to like? Well, a few things, but overall Ricki And The Flash a good time at the movies. A little more narrative heft wouldn’t go astray. It’s not often I complain a movie is too short, but I wanted more of Ricki.

And that surprised me, given the film’s pedigree—scripted by super-talented Diablo Cody, Academy Award-winning writer of Juno, Young Adult, and the much under-appreciated comedy horror Jennifer’s Body, and directed by Jonathan Demme (Silence Of The Lambs, Philadelphia). These people know their way around quality storytelling, I was still left wishing the movie was a little less predictable.

But, if you’ve got La Streep in the lead, there’s going to be good stuff. 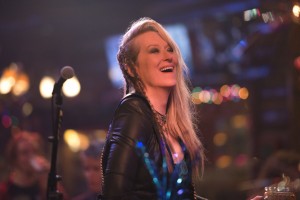 She’s Ricki, or, in fact, Linda. Formerly from Indiana she, at some point years ago, left her husband and three kids to pursue her dream of being a musician. Now her kids are grown, getting married and getting divorced.

Ricki and her band, The Flash, have a standing gig at a Tarzana, California, bar. I wondered how many drinking establishments these days pay a live house band to do covers most nights of the week, especially one whose playlist includes Tom Petty, Canned Heat, along with Pink and Lady Gaga. Maybe it’s a California thing. She also pays bills working at a grocery store.

Ricki’s at the bar when she gets a call from her ex, Pete (Kevin Kline), who reports that their daughter, Julie (Mamie Gummer, Streep’s real-life daughter), has been left by her new husband and is having a rough time of it.

Ricki gets on a plane, going back home for the first time in years. Julie isn’t thrilled to see her, and neither are her other two kids, sons Josh (Sebastian Stan, who will probably always be The Winter Soldier to me) and Adam (Nick Westrate). Josh is getting married and is keeping that detail on the down low because he doesn’t want to invite his mother to the wedding.

All of which you should know if you watched the trailer. 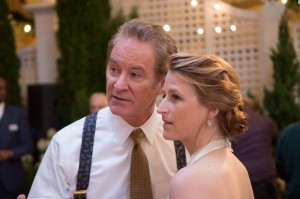 Unfortunately, the story doesn’t go too many other places. Having conjured up this vivid lead, Cody doesn’t do too much with her.

Ricki helps Julie with her issues by taking her to the salon and the donut store. I was really hoping for some serious mother-daughter bonding here, maybe an impromptu road trip or something. It might have been interesting to know when it was that Ricki decided to head to California, and what precipitated that decision, or how it went sour with Pete. Or maybe in the midst of this Ricki could find some unexpected career success. Some kind of emotional catharsis. But it doesn’t really come, beyond a heated tussle with Pete’s new wife, Maureen (Audra McDonald) and an inevitable scene at a wedding (again telegraphed in the trailer).

The film also has some interesting things to say about the responsibilities of male rock stars versus female, and what the guys get away with. And there’s Streep and Kline. So great to see them again together. I was reminded they once co-starred in the king of all feel-bad movies, Sophie’s Choice. More than 30 years ago they played doomed lovers and that experience informs their chemistry here. 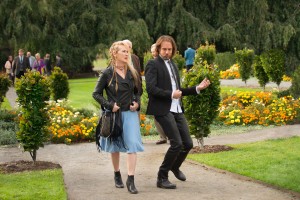 Rick Springfield, playing Ricki’s lover/guitar player, also acquits himself well. Springfield is building a solid body of work lately with his work in Californication and True Detective, and he impresses opposite the three-time Oscar winner. Plus, he provides the musical chops for the many scenes of The Flash performing, of which there’s a lot. Maybe too much in a movie where  narrative movement is substituted with montage. But the song selections are well-chosen, especially a fairly recent Bruce Springsteen track played in the last act.

And the question of whether Streep can really play? Good enough for me, but maybe not for the real musicians in the room.  I didn’t find her being a real-life neophyte with the axe any kind of a distraction. The fact of it is, at 66, Streep is a master performer, however you want to cut it. No one working today has her kind of range, the capacity to be utterly convincing in such a variety of work. When Tilda Swinton or Jessica Chastain is her age, then we’ll see about them.

On Friday afternoon I was a guest on Sheldon MacLeod’s show on News 95.7, and he asked me (on behalf of a listener) to recommend my three favourite Streep movies. Off the top of my head I chose her two late-80s pictures with Nicholson, Ironweed and Heartburn, and I mentioned Sophie’s Choice too. But Sophie’s Choice isn’t a movie most can see more than once—as I mentioned, it’s devastating.

For the record, I’m also a fan of her work in The Deer Hunter, Manhattan, The French Lieutenant’s Woman, Silkwood, Bridges Of Madison County, One True Thing, Doubt, Julie & Julia, to name just a few.

And she’s the best reason to see Ricki And The Flash. 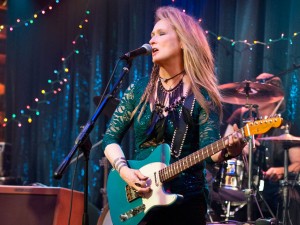