Welcome to items from The Vault.

Between 2005 and 2009 I was a programmer on CKDU 88.1 FM every Sunday morning with something called The Love & Hate Movie Show. I talked about what I was seeing and revisited some of my favourite films of old, pretty much what I do now here on FITI. I still have a lot of the scripts from those days, and thought I should share them here for archival reasons (and just for fun). As the blog’s fifth birthday approaches, what better time than now to look back, all my words originally written for broadcast.

Upon the release of Indiana Jones And The Kingdom Of The Crystal Skull in May 2008, I revisited the three previous adventures on an episode of TLAHMS, co-hosted with local cartoonist and Spielberg aficionado Dave Howlett.

Raiders of the Lost Ark 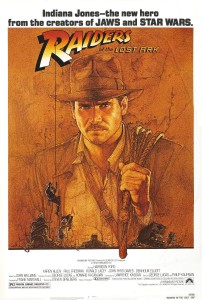 It’s hard to believe anyone listening to this hasn’t seen this film, but if not, here’s the deal:

Dr. Indiana Jones is an American professor and archeologist in 1936, often pursuing strange artifacts in foreign lands. The more unkind might call him a grave-robber. Certainly that word is brought up in the 4th movie that opened this weekend. But he’s painted here as a driven, not-easy-to-get-along-with, wildly resourceful, and hard-to-kill adventurer. His life’s work is to have these ancient wonders available to all in a museum, perhaps the element of his character that’s most likeable.

He gets wind of the Ark of the Covenant: It’s supposed to contain the last pieces of Moses’ tablets upon which are written the 10 Commandments. Hitler and Nazis want it to, and for the first time there is a lead to where it might be, buried somewhere in the Egyptian desert. It is said that any army that carries the Ark is unstoppable.

An ode to low-budget adventure serials of the Spielberg and Lucas’ childhood, Raiders manages to combine the international locations and action of a James Bond movie with touches of Bogart-era period drama (more than a little of Casablanca and The Treasure Of The Sierra Madre in here). It’s great stuff.

Nominated for 8 Academy awards (it only won 4 technical awards), Raiders is generally agreed to be the most entertaining adventure movie of all time, and if often held up to students of film as the ur-text of how to make a satisfying action picture. It’s tough to find flaw with it.

It all works: the pacing, the music, by frequent Spielberg partner, the maestro John Williams, the locations, the plot—so well-researched and detailed, packed with exposition but not so much that it’s beyond comprehension or slows down the movement of the film.

The casting of the leads is perfect. The idea that Tom Selleck was once a front-runner to play Indy just seems wrong. No offense to Mr Selleck, but it’s impossible to think of anyone but Ford in this role.

Indiana Jones and the Temple of Doom 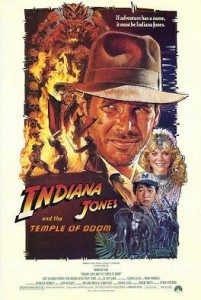 This is the one that gets the most criticism for being too dark, with scenes of children endangered. Spielberg himself has called the film a failure.

This time it’s set in 1935, a year before the last movie. Indy is in India, sort of accidentally, helping villagers try and find their children that have been abducted by a terrible cult, led by the evil Mola Ram, who can turn his followers into zombies and pull men’s hearts out of their chests.

Recently when revisiting it, I felt the biggest mistake was the second act, where everything just slows to a crawl around the temple itself, and all the bad stuff going on there, including the parts with the kids and Indy getting brainwashed.

But I found the opening in Shanghai has a wonderful farcical edge (including Indy and Willie falling 4 stories and bouncing off awnings), with the Club Obi Wan a hilarious (if a little obvious) Star Wars nod. And later on the underground mine cart chase is amazing, as is the rope-bridge finale.

Kate Capshaw’s been quoted as saying she screams too much in the picture. I have to agree with her on that. She’s a seriously grating presence throughout.

Indiana Jones and the Last Crusade 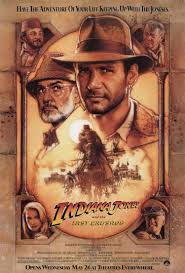 By the time the third movie came out, the success of the franchise was well established. Spielberg wanted to make something lighter and more fun than the last one. The introduction of the elder Dr. Jones, Indy’s father, played by Sean Connery, pleased many, and though I thought the dynamic between the characters was great, I was starting to feel that Indy was no longer the star of his own movie.

The thing about Raiders that I thought worked so well is that he was the single, driving force against insurmountable odds, somehow always finding a way to succeed, even while being captured and beaten up and not getting the artifact in the end, much like the lead in a hard-boiled detective story. The other characters are always just trying to keep up. In Temple of Doom I felt that he was still very much the singular hero, with Short Round a kid sidekick, sort of like Robin to Batman. (I suppose that would make Willie Scott Catwoman, to extend the comparison.) That was OK.

But in this one, along with the bumbling Markus Brody, the duplicitous Elsa and the older Dr Jones, it was more comical and much less exciting. I loved the opening with River Phoenix playing a teenaged version of Indiana Jones cutting to a great scene on an ocean trawler in a storm. In fact, the openings of all the films, including the new one, are marvelous. I liked the scenes in Venice and I liked the climax, though using the exteriors at Petra was a little annoying. Anyone who knows anything about the ancient world knows Petra in Jordan. It’s too high profile. It feels to me like shooting at the Acropolis and pretending it’s somewhere else . But maybe no one cares about that but me.

Also, pursuing the Holy Grail made me think of Monty Python. I couldn’t help it.

I also felt like the battle around the tank was too much like the chase scene in the first film. So, yeah, personally, though I agree the third movie is a lighter and more fun in some respects, I thought the Temple of Doom, despite its problems, to be a more original and involving movie.

Indiana Jones and the Kingdom of the Crystal Skull 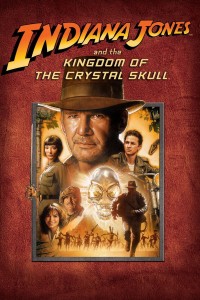 I have to admire the fact that these guys wanted to go back and try to make another film in this series after so many years. It’s dangerous to mess with a much beloved franchise with another entry.

It starts really promisingly. The opening segment, taking place in 1957 Nevada is solid, with kids in hot rods listening to Elvis, and Area 51. Jones looks a bit more rumpled than usual, but it is great to see Ford in the fedora again. 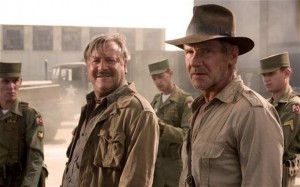 The warehouse sequence is a lot of fun, with Jones in big trouble yet again and finding his way out of it despite hopeless odds. Ford is still spry and fit, though missing some of the wit of the earlier films. And you really have the sense that Spielberg, with his old cronies John Williams and George Lucas, is really enjoying himself here. There’s some real silliness with some desert rodents, but it’s not enough to capsize the production.

Then we get into the meat of the plot; the kid, Mutt Williams, seeks Jones out at the New England university where he now has tenure. He carrying a riddle in the form of Mayan writings, written by “Ox” Oxley, an archeologist friend captured by the evil Russians, which might lead him to the location of the Crystal Skull, an artifact with supposedly magical powers somehow connected to the city of gold in the Amazon jungle, El Dorado.

An excellent motorcycle chase takes place during this section and a funny scene in a 1950s diner.

Off Mutt and Indy go together to find Ox and figure out where the skull is. And here, in what is only the end of the first act, does it begin to fall apart. They make an effort to find the cell where Ox was imprisoned, and he’s kindly left a map to where a grave holding the skull is located.  I was reminded of the deft exposition back in Raiders, and how muddy in comparison it is here. I’m not entirely sure how the map explains where the graveyard is, or how they get to the graveyard. Who are the people/demonic figures guarding the graveyard?

Then we’re in the Amazon, and at this point, I started to feel as though this could pretty much be any post-Raiders knock-off adventure movie. The special quality of the franchise has started to wear thin. There’s another wildly implausible car chase through the jungle with no roads—they have tree sweeper of some sort, but it’s dispatched pretty quickly and yet the chase continues. We get a ridiculous monkeys-and-vine-swinging scene, which must have been Spielberg’s effort to pay homage to Tarzan or something. It’s the movie’s low point.

The creepy crawlies in this movie are giant ants: very CGI, but still pretty creepy. Then there’s an absolutely silly scene involving an amphibious car going over a gigantic waterfall.

My point is that by the third act, the film had turned into a cartoon. There can be no suspense at that point. I’m saying that a small measure of internal logic and realism has to be sustained, and this stuff went way too far. This is a lot more of a stretch than Indy hanging onto the outside of a submarine. For the record, I could accept the alien races subplot and the grand finale, which was cool, but that jungle waterfall sequence was really dumb.

Also, again, it’s not really Indy’s movie. By the third act he’s travelling in a group of five, and sharing screen time with all of them. It’s the same problem I was starting to have in the third film. Cate Blanchett is OK as the villain of the piece, and Shia LeBeouf seems to have the physicality required to be an action hero, but I don’t find him anywhere near as charismatic as Ford.

Spielberg has spoken about more films, with Mutt Williams getting into Dr. Jones’ shoes as the archeologist and adventurer. I’m sorry, but Mutt Williams and the Search for Atlantis may not be a movie I’ll rush out and see.

My inclination is, for the sake of nostalgia, to recommend the film, and for that awesome first 30 or so minutes, where I was like, “holy smoke, they’ve really recaptured the spirit of the franchise!” It’s just a shame that they aren’t able to sustain it.