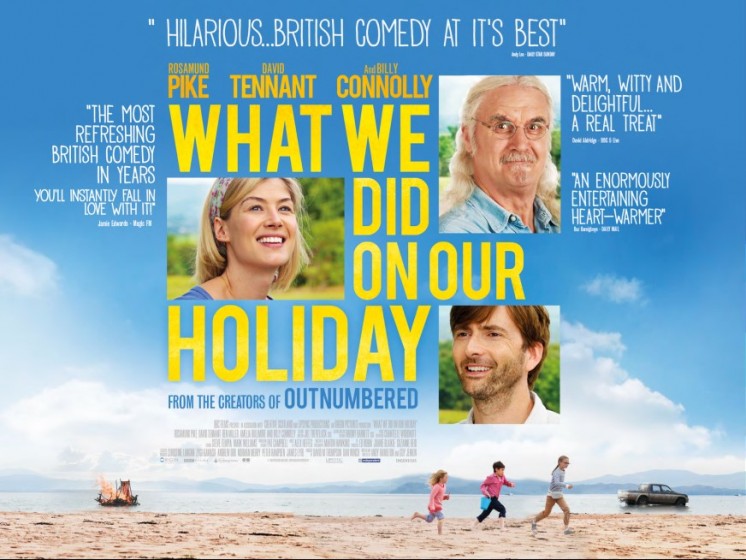 Written and directed by Andy Hamilton and Guy Jenkin

A friend of mine told me she’d seen this on a flight in Southeast Asia a few months ago, so we’re getting this British picture in Canada pretty late. I’m actually pleasantly surprised we’re getting to see it in cinemas at all. It could have something to do with the sudden stardom of Gone Girl‘s Rosamund Pike, featured prominently here. This is a scrappy family comedy about a soon-to-be-divorced couple and their three kids who take a road trip from England to visit family in Scotland. What makes it charm, lifting it clear of a thick vein of schmaltz and a bit too much cutesy kid stuff, are the unexpected places the plot takes us. One particular event about halfway in I won’t spoil, but I’ll bet you won’t see coming.

Granddad Gordie (Billy Connolly who, since the death of Robin Williams, is the funniest man alive) is turning 75, and there’s a big party planned. Abi and Doug want to keep their intent to split a secret so to not upset him, and instruct the kids to lie about it, which causes no end of trouble, along with life-lesson opportunities on when adults lie, when it’s OK to lie, etc.

Much of the humour spills from the mouths of the kids, prone to awkward and embarrassing honesty in the face of their parents’ deceit and chronic bickering. The script is prickly, and the child actors refreshingly unselfconscious. The parents are unfortunately a little underserved—the script gives Pike and Tennant exactly two things to do: fight and be remorseful about fighting. But Connolly is effortlessly magnetic, especially in his scenes with the children. You’ll wish he was your grandpa.

I thought I had the movie figured in the first act, that the laughs and pathos would centre around the parents coming to grips with their relationship, and with the kids, and maybe reconciling. But that’s not really where it goes, offering up a much more outrageous narrative detour. Thematically it’s about focussing on what’s important in the grand scheme, and how we can get distracted by greed, insecurity, and the kind of issues modern life throws our way.

It’s also about people who hail from Lesbia. And Vikings. But I said I wouldn’t talk about that, didn’t I? In fact, I wish it had been even less about the parents. Late in the running we have a couple of silly scenes ratcheting up the strings in the soundtrack and the saccharine in the screenplay, almost spoiling the main event that roots the movie, and all that sterling work Connolly does with the kids. Almost, but not quite.

I also have to mention, this isn’t a movie that looks like much. The Scotland exteriors are gorgeous, but all the interiors look like they were lit by someone working for British TV  in the 1980s. This is the cheapest looking feature I’ve seen in a long time. I suppose there’s an argument to be made for its anti-pretense, giving the production a feeling of a home movie. I would not make that argument, but one could. What I will say is What We Did On Our Holiday is, for the most part, an unpredictable pleasure, an unpolished and intermittent comic adventure in a season with far too much polish—over-cooked, pre-masticated audience-tested product.

It could very well make your day.

What We Did On Our Holiday opens in Halifax Friday, July 24