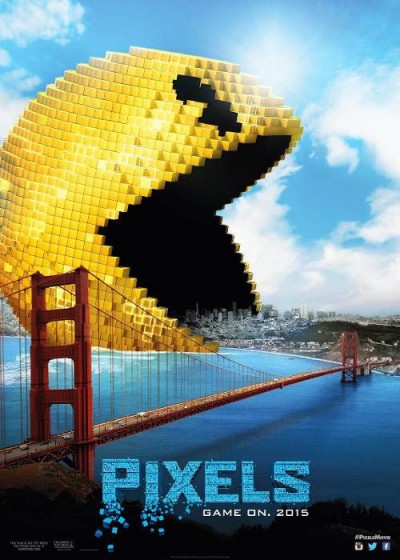 Directed by Chris Columbus, written by Tim Herlihy and Timothy Dowling, based on a short film by Patrick Jean

There was no way I could miss the critical drubbing Pixels received when it opened last weekend. Reviews were practically unanimous in their negative assessment of the film, from one side of the critical community to the other. People have even taken shots at the poster (above) because none of it takes place in San Francisco.

Even if I had missed it, this is an Adam Sandler movie, produced in part by his company. It’s unlikely to be another Punch-Drunk Love, that one time he worked with PT Anderson and created a minor masterpiece. It’s unlikely even to be a Happy Gilmour.

And it isn’t. Pixels is bad. The script is lazy, sexist, and mining a deep vein of nostalgia in a way that’s tiresome and cynical. I went in not expecting much, and I didn’t get much.

But is it a catastrophe, the worst thing Sandler or any of the cast has done? Based on Sandler’s career alone, especially recently, that’s a lot of crap to measure. I wouldn’t go that far.

Pixels was born out of an interesting concept,  a two-and-a-half-minute short much better than the feature spun from it:

Footage of people playing arcade games gets included among cultural artifacts of the 1980s and sent into space. An alien civilization—advanced enough to travel through space, communicate with others, and attack earth, but not smart enough to distinguish between actual threat and gameplay—uses those old games as avatars and threatens our destruction.

One time video-game expert Sam (Sandler) now sets up home entertainment systems. He’s an unhappy shlub, because he and the movie he’s in believe being a tech installation expert is a lowly profession. His best buddy (Kevin James) somehow became the President and married Jane Krakowski, who must have had more of a role on the page, because why else would such a talented comic actor do this? She has three lines. Another of their childhood buddies, Ludlow (Josh Gad), is also hanging around, painfully virginal and still lusting after a fantasy video game warrior from his past. Or he’s closeted, since he keeps coming on to his male friends. It’s a little unclear, and remains so throughout. 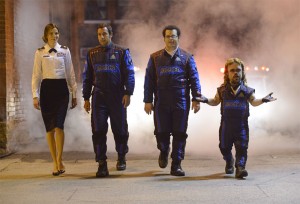 When the aliens attack, these guys get a chance to save the world, along with their former video-game playing nemesis, Eddie (Peter Dinklage), a character clearly based on Billy Mitchell from the documentary The King of Kong (which is really worth seeing).

Oh, and military mucky-muck and presidential advisor Violet (another thankless role for Michelle Monaghan) becomes Sam’s love interest. It’s hard to imagine she’d have any reason to date a guy who calls her a snob for rebuffing his advances, especially when he’s obviously totally self-hating.

It’s funny, the more I try and explain this movie, the more difficult it is to find anything good to say about it. The plotting is massively slapdash, the character motivations are unclear, and nothing makes much sense. For example, can someone tell me why they all have a fancy ball in the middle of the movie, before the threat of armageddon is ended?

These guys give nerds a bad name—and I never for a second believed that Sandler was ever awkward or socially self-conscious. And he’s working with a script that’s OK with the  deeply problematic idea of an alien “trophy” transforming into a woman as a prize for victory.

I get the feeling the filmmakers are aiming at a general audience, something light and silly for the kids, but given how much ’80s culture gets strip-mined for this movie—even Max Headroom (Matt Frewer) makes an appearance—what kind of nostalgia for these video games would someone born in the 21st Century have? They probably won’t get the references. But stuff does blow up into tiny little cubes, so that’s some fun. Right? 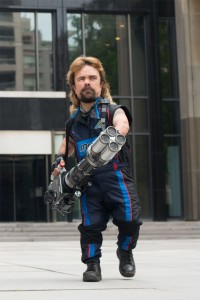 Interesting that Fiona Shaw, here as the British Prime Minister, doesn’t even get an “uncredited” mention on the IMDB page for the movie. Is it possible she doesn’t want to be associated with it at all?

I’ll say this, one positive note: Peter Dinklage gets a few sharp lines. And his mullet is something to be treasured.

Is that enough to go see Pixels? Probably not. No matter how low your expectations.