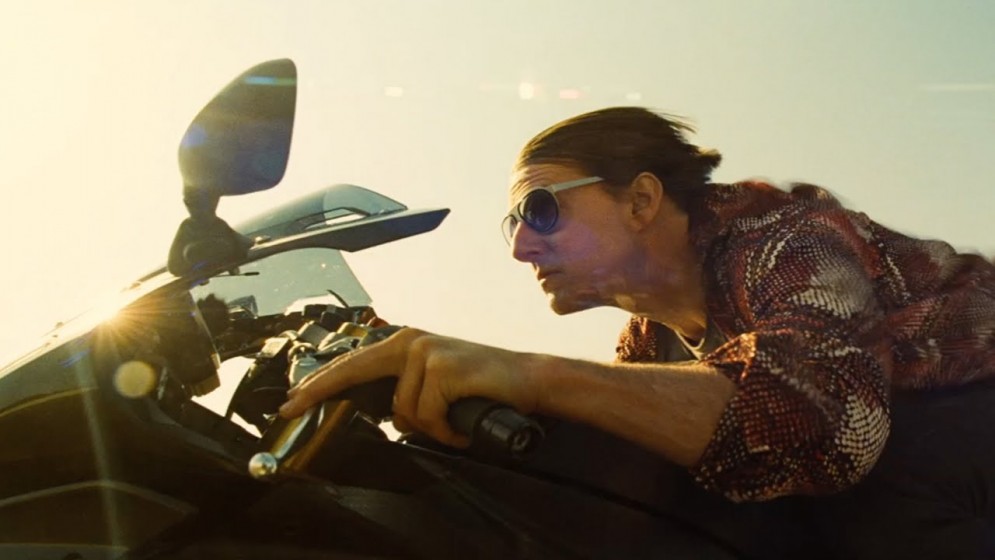 Written and directed by Christopher McQuarrie, from a story by McQuarrie and Drew Pearce, based on the TV series created by Bruce Gellar | Prime Video

We get 19 years, and the fifth entry is the best so far? How is that even possible?!!

But it is. I give it a slight edge over the stellar third entry with Philip Seymour Hoffman as the badass villain, the first one with the wonderful Vanessa Redgrave as Max, or that one from 2011 with the jaw-dropping stunt on the side of the Burj Khalifa in Dubai. (You can go here for my reviews of the previous four movies going back to 1996.) 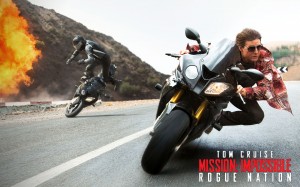 It’s partly what The Usual Suspects-writer and Tom Cruise-buddy McQuarrie (who wrote and directed Jack Reacher) has done with the material, a confidence in handling the complexities of the spycraft, taking it from one end of the spectrum towards the other—and I’ll explain about my spy thriller spectrum theory in a moment—while also borrowing a few stylistic touches from the big kid in the secret room, James Bond. Oh, and did I mention the introduction of the most formidable woman we’ve seen in a spy movie since Melina Havelock?

About the spy spectrum: 007 and Mission:Impossible are on one end, the action-heavy escapist fantasies, and the John Le Carré-style potboilers are on the other, movies like A Most Wanted Man and Tinker Tailor Soldier Spy. Rogue Nation takes a couple of steps towards Le Carré in its geopolitical heft this time out, while still being the most Bond-esque of the franchise to date, happily having it both ways. 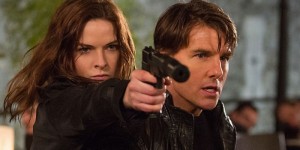 The big stunt you’ve seen as part of the marketing of the film, the plane ascending with Ethan Hunt (Tom Cruise) hanging off it, takes place in the first minute of the movie. A good place to start. Hunt and his Impossible Mission Force buddies (Simon Pegg as Benji, Jeremy Renner and Brandt, and Ving Rhames as Luther, thankfully on screen a little more prominently this time) are on the trail of The Syndicate, an international cabal of former spies and killers, run by a very Bond-like villain named Solomon Lane (Sean Harris). Also working with The Syndicate is the wonderfully named Ilsa Faust (Rebecca Ferguson), who may in fact be double agent—no one seems to know for sure who she’s working for, even her.

Meanwhile, back at the ranch, CIA director Hunley (one-timeJack Ryan Alec Baldwin, stepping back into this material after years in comedy) has had it with this irresponsible IMF force and has pulled their funding, with Hunt declared private enemy number one. But that’s not going to stop him chasing down the bad guys in The Syndicate. That dude has resources. 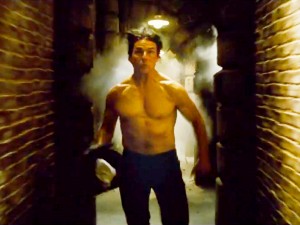 The overt Bond inspirations continue with the superb choice of locations: Havana, London, the Viennese Opera, and Casablanca. Stellar, and gorgeously shot, each one. There’s a sophisticated sense of style in the movie’s production design, even in how “Nessun Dorma” from Puccini’s Turandot—featuring in a key set-piece early in the film—becomes a repeating theme in the score. And I don’t think it’s a coincidence they find an excuse to put the key British member of the cast in a tuxedo.

The outrageous plot machinations, a constant in the series, continue to dazzle. They fly so fast there’s next to no time to examine them, which is definitely for the best. As usual, we have something kept in a super-secret, virtually impregnable vault that the team needs to burgle. Here it’s a computer file behind security that comes with a deep water cooling system, which requires a free dive of many minutes to foil.

How this facility works, how it’s paid for, or why it’s located in North Africa, isn’t really explained. Neither is how Hunt manages to expire, get brought back to life, survive an end-over-end car crash, and a high-speed motorcycle spill (without a helmet), all in one afternoon, without much of a scratch on him. The stunt work is of the highest quality, and the CGI, if it’s there, is invisible—as it should be.

Three other important elements elevate the material above the average and raise the bar for this franchise:

First, a star-making role for an unknown: Swedish-British actress Rebecca Ferguson is a revelation. Not only is her role impressively complex, she’s also capably acrobatic—or her stunt doubles are. Either way, she kicks some ass. 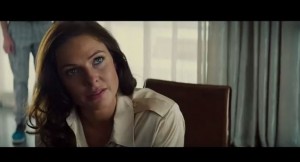 Her character is also the fulcrum for how the movie gets into the vagaries of the spy business, which is that these agents are pawns, their lives mean nothing in the grand scheme, and the ground beneath them is constantly shifting.

And that leads to the second thing: this time out moral ambiguity is presented in contrast against the characters’ emotional investment. It’s counterintuitive, the idea that these spies would betray their superiors, even their countries, in loyalty to their friends or to their kind. It goes against what we probably assume about the profession. “There are no allies, only those with a common interest,” as Atlee (Simon McBurney), the head of British Intelligence, puts it so succinctly.

But that isn’t what the boys in the IMF believe. It brings a touch of the Furious franchise in that sentiment, celebrating a certain kind of honour amongst thieves, but it’s more affecting and much less syrupy here.

Finally, the third thing Rogue Nation really has going for it: how Tom Cruise is maturing. He finally looks like he’s hit middle-age. In other words, he looks about 10 years younger than his actual age. 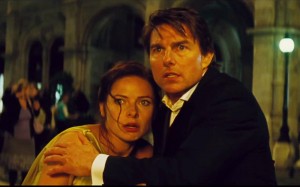 But that works well for Ethan Hunt and for the audience. Cruise is no longer quite so cocky, which was one of his least appealing qualities in this and other franchises he’s worked in. He’s more vulnerable, with Hunt getting his ass handed to him a couple times in this movie. Yes, he does manage to ridiculously defy death on a few occasions as detailed above, but I think the lines in his face, a touch of world-weariness, provides a little depth he, and the movies around him, have heretofore been missing.

All of which makes this mission very much worth accepting.