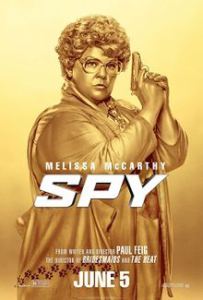 Written and directed by Paul Feig

As I mentioned on Friday, I haven’t seen a lot of Melissa McCarthy’s films since Bridesmaids, though that one, also with director Feig, was a lot of fun. This one is, too. It functions as a spoof of long-held spy movie tropes while being a genuinely fun action movie.

Do all the laughs land? No. It’s the kind of script that throws everything at the wall and hopes it’ll stick, from subtle stuff like a John Barry-esque score to evoke classic 007, to broad slapstick and hemorrhoid jokes. It depends on what makes you chuckle—along with what turns you on, I’d wager there’s not much in life and moviegoing more subjective than those things. But I’d also wager this movie will make you laugh somewhere in its running time, especially if, like me, you have a fondness for spy thrillers. 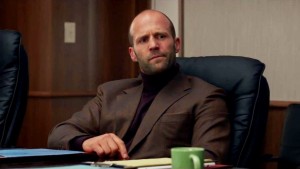 McCarthy is Susan Cooper, a CIA operative who works in the bat- and mouse-infested “The Basement” at Langley, offering surveillance and remote assistance to agents in the field, specifically Bradley Fine (Jude Law, sporting a threadbare American accent), who she’s deeply in love with. He, of course, takes her for granted.

When a nuclear weapon falls into the wrong hands—stylish Eurotrash Rayna Boyanov (Rose Byrne, brilliant as usual)—Susan gets the chance to prove herself in the field, from Paris to Rome to Budapest, in a host of ridiculous wigs and the unsexiest cover identities you could possibly imagine. Complicating matters is rogue agent Rick Ford (Jason Statham), who’s been working so long he’s immune to 172 forms of poison. He takes matters into his own hands at every opportunity. 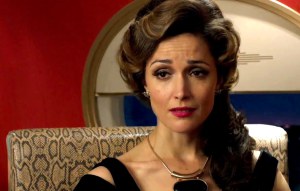 Filling out the cast is wonderful support from Miranda Hart, Peter Serafinowicz, Morena Baccarin, Bobby Cannavale, and Allison Janney, who gets to deliver a wild line destined to be a meme, but it’s the Stath who’s really on fire here. He pretty much sticks to what he does in every one of his movies: sets his jaw, delivers his lines in a thick Cockney accent, and gets in peoples’ faces. Here he’s hilarious. Also great to see character actor Wil Yun Lee, playing another agent—I think he’s the only cast member with genuine Bond credits. He was North Korean baddie Colonel Moon in Die Another Day.

There are plenty of great reversals, betrayals, locations, cars, gadgets, and gags. The fact the film is a hard-R means there’s blood and gore the likes you might not see in another kind of spy movie, and the language is about as salty as it gets.

Really fun to see performers like McCarthy and Hart get their teeth into this material, and make fun of the fact that a genuine spy might need to be as invisible as Susan Cooper often feels. It’s a conundrum Bond hasn’t ever satisfyingly explained, how such a handsome, attention-grabbing super-spy actually accomplishes anything requiring discretion. 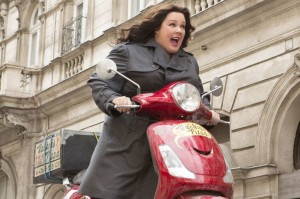 Spy includes a few action sequences that genuinely convince. McCarthy’s stunt double is amazing—the hand-to-hand combat scenes are a hell of a lot better than in, say, Taken 3, that’s for damn sure. Feig may have an action director in him, if this comedy thing doesn’t work out. Bodes well for Ghostbusters.

(Oh, and make sure you stick around through the credits. It’s well worth the wait for an additional scene/blooper.)