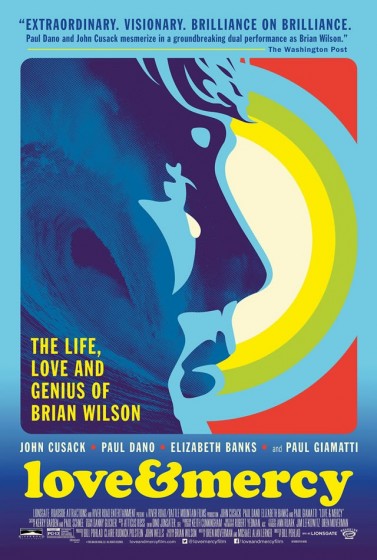 Directed by Bill Pohlad, written by Oren Moverman and Michael A. Lerner, based on the life of Brian Wilson.

Coming soon on my podcast, Lens Me Your Ears, with Stephen Cooke, is an episode on musical biopics. My arm needed a little twisting on this subject because biopics in general aren’t my favourite genre—I always ask myself if a documentary on the same subject would be as moving as the inevitably fictionalized drama I’m watching. Too often I find I lean on the side of the doc. I really love a good music doc, and I find too many biopics rote and simplistic.

But every once in awhile I take in a biopic that illuminates its subject and has something universal to say, and I was pleased to find that’s the case with Love & Mercy. 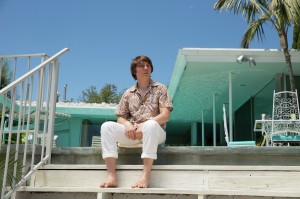 I was especially cautious going into this film recognizing Oren Moverman as co-writer. He wrote the Dylan biopic I’m Not There (2007). I liked the conceit of that movie, the idea of telling someone’s story in episodic chunks with different actors. (Especially when one of them is as good as Cate Blanchett.) Next to 32 Short Films About Glenn Gould (1993), it’s maybe the most avant garde approach to the biopic that I’ve seen.

But, for me, that movie was also a tipping point for my having had enough of boomer icon hagiography, the endless mythmaking undertaken by people of my parents’ generation. The pretension that Dylan is just too complex a figure in culture to be understood in any less that seven actors? Give me a fucking break.

But what Moverman and his colleagues have done here is reveal Brian Wilson in two slices, one narrative set in the late 60s when he was in his most prolific and lauded creative period, between the Pet Sounds and Smile records, and one set in 1985, when he was heavily medicated and under the care of a domineering psychiatrist, Eugene Landy. This approach humanizes Wilson in a way I’m Not There failed to do with Dylan.

In the 60s, Brian Wilson (Paul Dano) is the creative force behind the California surf pop band The Beach Boys, writing most of the music performed by the band whose line-up included brothers Dennis and Carl, cousin Mike Love, and friend Al Jardine. They’d recently fired their manager and father, Murry, as Brian set about taking the band in a new direction, inspired by what The Beatles were doing over in the UK. The Wilson patriarch (Bill Camp) is still an influence on his sons, but mostly in a negative, domineering way, still stung by no longer leading their careers. 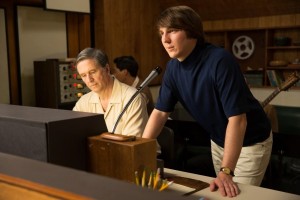 In these sections we really see Brian’s impetuous creativity, how he uses seasoned studio musicians and expands the band’s sonic palette, creating an orchestral pop sound that was unlike anything out there at the time.

Dano, who I’ve found to be a problematic screen presence in the past, absolutely nails the Young Brian. He inhabits the character completely, showing how his mental illness and drug use undermined his confidence in his work, along with the pressures he felt of being a successful artist, both from inside and outside the band. Mike Love (Jake Abel) winds up looking particularly bad, suggesting Brian’s creative ambitions are selfish, that they should stick to what people like about them: songs about girls, cars, and surfing. The scenes that take place in the recording studio are especially fascinating, how the filmmakers able to estimate Brian’s gift for communicating his ideas, for making this wonderful music. 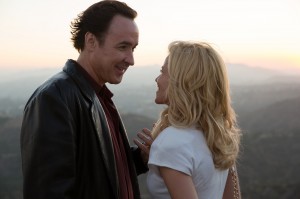 As the Older Brian, John Cusack continues the mannerisms Dano establishes, but somehow doesn’t quite personify Wilson in the same way. However, the storytelling is so confident,  I never felt a schism between the two takes on the character. The ’80s-set portion is actually a love story, set against the shambles that is Brian’s life: he’s alienated from his family, victimized by his illness, painfully overmedicated by his 24-hour-a-day doctor, Landy (Paul Giamatti, as wonderfully sleazy as he can get), and not making much in the way of music. Brain wanders into a Cadillac dealership in order to buy  a car, and meets a salesperson, Melinda Ledbetter (the absolutely terrific Elizabeth Banks), who he asks out on a date. Through her eyes we begin to see how fragile Brian is, and how much he’s controlled by the people around him.

Brian is the only character who appears in both parallel story threads, and, accordingly, it’s a bit of a struggle to really connect the two, to figure out how one led to the other. That may be a problem with the film, I haven’t entirely figured out how I feel about that lack of overlap, the gap of 15 years we never get to see.  I will say the individual stories are strong, and so are the performers: What is on screen works well and makes you feel for the characters. This is quality prestige drama, and I hope its remembered come awards time, especially for Banks and Dano, who are in peak form. 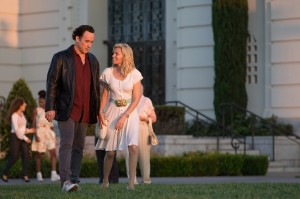 I suppose that should be the final assessment of biopics in general: Were you moved, and did you come away knowing more and caring more about the subject than you did beforehand?