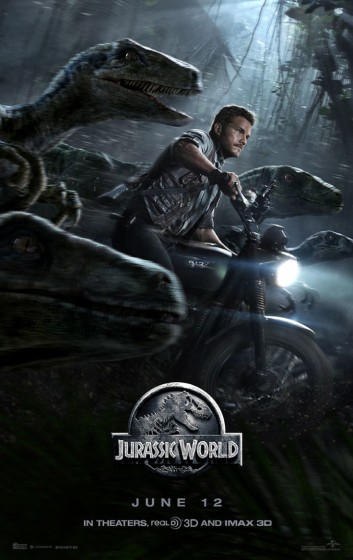 Wherein a superhero dinosaur, genetically engineered to be bigger, smarter, and tougher than all who came before, finds freedom from enslavement, then crushes and eats all who oppressed her. It’s a tale of redemption, of the triumph of truth over corruption, and, most of all, a heartwarming ode to theropod liberation.

No, not really. But wouldn’t that be cool?

Jurassic World is actually a pale imitation of Steven Spielberg’s 1993 adaptation of Michael Crichton’s Jurassic Park. It’s the worst kind of sequel, a cynical, carbon-copied effort where nothing, not the acting, story, special effects, nor the thrill of the thing, approaches the standard set in the original. It makes a movie like Mad Max: Fury Road, also based on a fallow franchise of years past, seem like that much more of a miracle.

The first act of Jurassic World is wall-to-wall with dull exposition: Capitalism has once again run amok, and despite the failure of this theme park concept in the first film and its inherent dangers and related loss of life, it’s fully operational now, complete with shoddy security systems, under-trained and unprepared park staff, animal exploitation, general hubris, and money-grubbing—all that stuff Crichton liked to wade into. 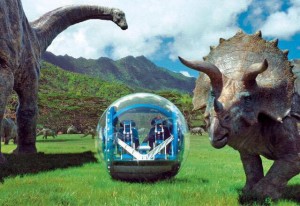 Still, watching the movie, any consumerist criticism feels hollow in view of conspicuous product placement: Watch as one character says, “You wanna see something really cool?” and the next shot is a three-quarter angle of a brand new Mercedes. Naturally, Samsung has the naming rights for one of the park’s pavilions. When a character fetishizes merch from a previous Jurassic movie, that might provide a dry chuckle.

We get two boys, Zach (Nick Robinson) and Gray (Ty Simpkins) sent to the park on vacation by their parents—who may or may not be divorcing, the movie doesn’t care so neither should we. Zach is a teenager and likes to stare at girls. Gray is pre-teen, and is a nerd for dinosaurs. Otherwise they’re entirely personality free. 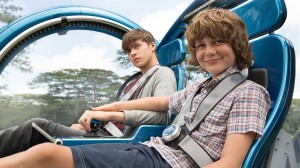 Their aunt, Claire (Bryce Dallas Howard), is operations manager at Jurassic World, overwhelmed with her job getting investors to buy into the park’s new plan: genetic splicing to make new, bigger, better dinos, like the indominous rex, a lab-created, hate-filled tyrannosaur with longer arms and other secret mutant powers.

Because her job is everything and she clearly hasn’t figured out family is where a woman finds true happiness, Claire gets her personal assistant to show the boys around the day they arrive. But before long she goes from unfulfilled careerism to well-rounded person who understands that kids and a boyfriend are worth shooting dinosaurs for. The gender politics here are just as Joss Whedon feared: archaic.

And what of that boyfriend? Chris Pratt is Owen, a wildlife expert who has sort-of trained velociraptors. Pratt’s checked pretty much all his natural charm at the gate, substituting instead a performance of posing, frowns, and squints. The only time he livens up at all is when he makes a few unfunny and sexist come-ons towards Claire. But you know his ribald charm will melt her frosty exterior! 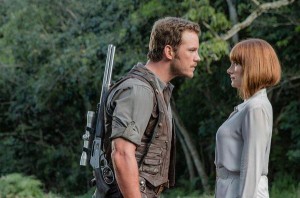 And then there’s Vic Hoskins (Vincent D’Onofrio), who has plans for weaponizing the raptors and getting rich, plans he’s made with the chief scientist Wu (BD Wong), right under the nose of the park’s idealistic owner, Masrani (Irrfan Khan). As the indominus frees herself from her suspiciously inadequate enclosure, both Aliens and Alien: Resurrection are deeply mined for plot points. This is fine with me—those are sequels that work—though the barefaced stealing adds to the movie’s overall knockoff feel.

As I sat through the frequently sluggish first half, waiting for a dinosaur attack to relieve the tedium,  I was perplexed at how the sense of wonder and fear Spielberg delivered in spades could be so absent here—despite so much effort being made to clone and repeat what he did—and how the CGI that created such solid and impressive beasties 22 years ago could actually be utilized less effectively so many years later. A lot of the dinosaurs have that CGI animated wash, where everything seems unreal, especially when we see them in groups. The soundtrack is also pummelling: Michael Giacchino apes John Williams’ bombast with none of the master’s ability to soar.

But you know none of the myriad of plot holes really matter. I recognized this as I struggled to ignore them: How does Claire manage to run through the jungle for most of the movie wearing spike heels? How does Owen, at a key third-act moment, manage to get his raptors to go against their natural instincts, even though earlier in the movie they all tried to kill him? Why is everyone so satisfied at the end when a particular creature is dead if others are still wandering around? 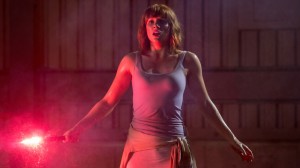 We know the exposition, the characters, all of that, none of it really matters in a Jurassic Park sequel: We all just want to see dinosaurs eat people, right? That’s what’s important.

Well, the indominous rex is threatening and roary. And people get eaten. Repeatedly.

So, if you need nothing else from your movie than that, chow down! I’m gonna need a little more, thanks, especially when earlier movies in the franchise did it so much better.

PS: You know what might have saved Jurassic World? A little Jeff Goldblum. Or anyone with half a brain.