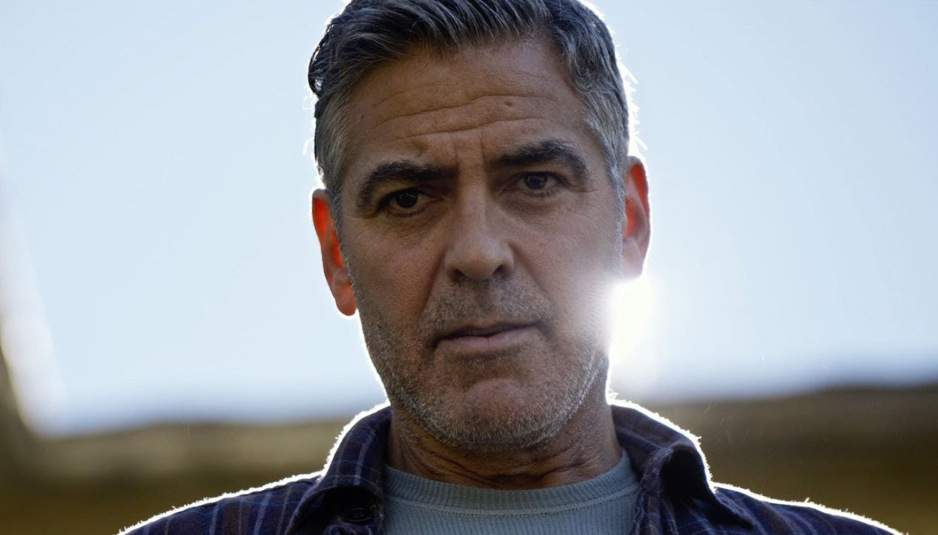 Directed by Brad Bird, written by Bird and Damon Lindelof from a story by Bird, Lindelof, and Jeff Jensen. 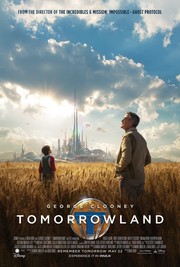 When I was a kid, I remember picture books that prophesized  the future: everything from flying cars to nuclear fusion, monorails to space colonies—great wheels in the sky. We’d all have robot helpers, and with so much automation and computerized help, much more of our time would be devoted to leisure. It was gonna be The Jetsons.

The 1970s still felt like the space age, a holdover from the optimism of the 50s and 60s, the idea that advancements in science would make the future bright and clean, help us live long, healthy, and happy lives.

Somewhere along the way we started to imagine a darker version of the future, finding a fascination with the post-apocalyptic and dystopic stories. In real life climate change is now the great existential threat, replacing fear of nuclear destruction, and we seem to be losing that battle on many fronts.

This is what makes the concept of Tomorrowland so appealing: It’s the future as seen from the past, a sense of potential often absent from the future we get in movies lately, in everything from The Hunger Games to the revived Mad Max. Too bad, then, there’s a chasm somewhere between concept and execution.

Things get going at the 1964 World Fair in Queens, where a boy genius Frank Walker (Thomas Robinson, who later grows up to be George Clooney) presents his jetpack to the organizers. They include Nix (Hugh Laurie) and a girl, presumably his daughter, Athena (Raffey Cassidy). Athena takes a liking to Frank, and lets him in on a secret beneath the New York complex: Tomorrowland, an other-dimensional hyper-advanced city built by humanity’s best and most creative minds, where the future is today.  But at some point, and under mysterious circumstances, Frank was cast out of this technological paradise.

In the present day we get to know Casey (Britt Robertson, who seems to me could be a little sister to Jennifer Lawrence or Brit Marling), a hyper-curious, tech-minded, motorcycle riding teen who hates her doomsaying teachers and the fact Cape Canaveral is dismantling its gantry systems and shunning the possibility of more space exploration. That also means her engineer father (Tim McGraw, who maybe shouldn’t give up his day job in country music) will swell the ranks of the unemployed. 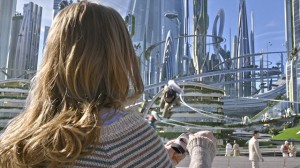 She happens upon a T-shaped pin, which offers a virtual gateway to that ideal city. But how does she get there actually? Maybe Athena and Frank can help.

I really enjoyed this conceit. Casey’s  discovery of this amazing place through a pin—she can see it briefly, but can’t stay—is pretty wonderful. The city is, of course, spectacular, full of strangely suspended pools of water, amazing floating buses, and, naturally, a space port. (Though the production designers must have been kicking themselves when they saw last year’s Guardians of the Galaxy. The city location in that film, Xandar, is more or less Tomorrowland with aliens.)

I feel like screenwriter Lindelof, having destroyed the world with zombies in his World War Z script, and destroyed all that was good and optimistic in Star Trek with Into Darkness, is attempting to make restitution with humanity, or at least the part of humanity that likes to go to the movies, in this picture. And there’s almost a Spielbergian sense of wonder that accompanies this journey back to hope.

But it takes awhile to get there. The set-up of Frank’s youthful connection to Athena, then Casey’s tale—including a terrific scene with merch shop robots and their laser blasters—is diverting but not much more. The stakes aren’t set up particularly high from the get-go here, really, just a lot of well-meaning folks trying to stay away from robots in suits.

There are moments when it feels like we could tip into the wackier world of Men In Black, if only there was someone in this movie as charismatic or fun as Will Smith, or if director Bird was willing to push the style beyond traditional Disney and deliver a little Barry Sonnenfeldian weirdness. Clooney is typically reliable, but he’s in curmudgeon mode here, where his Frank might have been more engaging as a Doc Brown-style mad scientist. 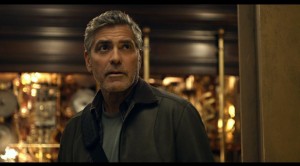 Casey connects with Athena, finds Frank at his automated fun-house-ride of a home—with a steampunk diversion to the Eiffel Tower—and when finally they make it to the titular city, it all ends up being a bit of a letdown. (And why was it they had to go to Paris when they’ve established a gateway to Tomorrowland exists in Flushing Meadows? It just occurred to me, that’s another Men In Black connection: the conclusion of the first MiB was in Queens.)

Cue a Hugh Laurie monologue on human apathy, which is mighty preachy in a movie based on a Disney theme park, and a conclusion that doesn’t amount to very much. Apparently we aren’t naturally pessimists, we’ve just been programmed to be that way. Really? I wish they’d gotten to the city sooner, and maybe explained a little more clearly why and how it was built in the first place.

Overall, there is a lot to appreciate here, and I’d say the filmmakers’ hearts are all in the right place. But a bit more fun, suspense, and concision wouldn’t have gone amiss.