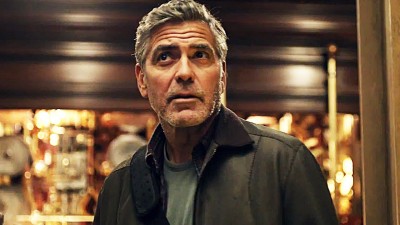 Maybe I’m feeling more affection for this reboot of a 1980s horror movie due to last week’s Mad Max: Fury Road, another relaunch of an 80s franchise, being such a blast.

But I’m actually kind of curious about this one, how they might update the Tobe Hooper/Steven Spielberg original for the suburban landscape and the technology of 2015.

(For those who don’t recall, the demons from the other world communicate/abduct through the TV.) The plusses on this one:

1) Lots of secrecy in the production and lead-up, meaning we haven’t been overwhelmed by the hype, despite it being a Disney production inspired by an attraction at one of the empire’s theme parks.

2) Brad Bird directing: The Pixar veteran (The Incredibles) also gave the world The Iron Giant and Mission Impossible: Ghost Protocol; he’s a gifted storyteller any way you cut it.

3) George Clooney: Generally reliable in the projects he chooses to show up in.

1) A stinky wind in the advance reviews.