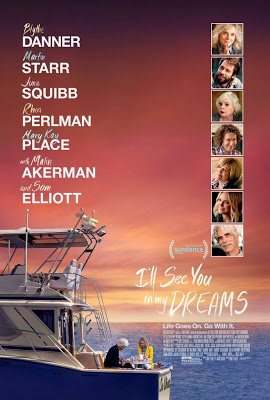 Directed by Brett Haley, written by Haley and Marc Basch

“It’s hard to lose somebody, no matter how many legs they have.” It’s a great line, delivered by the always solid Sam Elliott, about the death of an elderly Golden Retreiver.

It’s a rule of Hollywood screenwriting, if there’s an old dog in the early going, it’s definitely going to die. Here it’s within the first 10 minutes. There’s also a rule of movies about senior citizens: Death is a theme. Blythe Danner is Carol, a widow and former singer who lives comfortably on her own somewhere down in Southern California, hangs out with a feisty bunch of retirees (the terrific June Squibb, Rhea Perlman, and Mary Kay Place), drinks wine and plays cards.

It’s a pretty good life, but Carol feels out of sorts. Maybe it’s the passing of the pooch, or maybe it’s just a general feeling of ennui. It could be that her house has a rat problem.

Carol meets Lloyd (Martin Starr, dialling down his aggressive nerdiness), her pool boy, and they become friends. They go to karaoke. Carol’s gifted with the standards. Then she tries speed-dating. She meets Bill (Elliott), a transplanted Texan who takes a shine to her. And before long, her daughter (Malin Ackerman) shows up for a visit. A little aside: I wonder if people in their advancing years feel a little annoyed by these stories. It’s like the tired trope we saw for a long time in movies with gay characters—they were always suffering. The presumption that misery was a permanent state for people with a same-sex inclination. I really doubt everyone over 60 sits around thinking about death all the time. As a movie, I’ll See You In My Dreams is barely there, an extremely gentle character study about a woman sort-of dealing with some stuff. It’s a fine reminder of the extraordinary charm of its cast, especially Danner and Elliott, though otherwise it’s so breezy it might just blow away.

I’ll See You In My Dreams opens in Halifax June 5 or June 12.