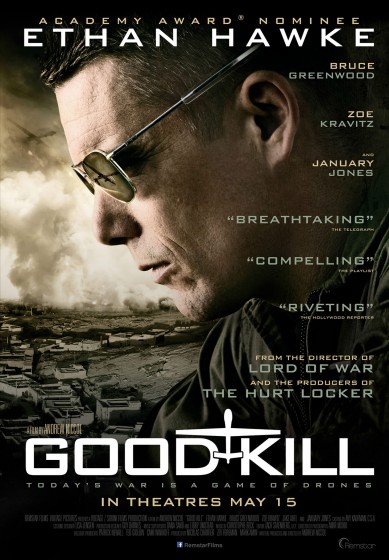 Written and directed by Andrew Niccol

Niccol’s work is never less than interesting. He wrote The Truman Show, and wrote and directed Gattaca, Sim0ne, Lord of War, In Time, and now Good Kill. He explores science fiction, but he also has a sense of the contradictions of our age: the way our media and technology can both liberate and confine us, and how while we may fight to defend freedom we also risk diminishing our humanity.

In Good Kill, he tells the story of Maj. Tom Egan (Ethan Hawke, continuing to make solid choices with his career), a drone pilot living in Las Vegas.

I didn’t know this, but apparently the current tech is such these pilots don’t need to live anywhere near their targets, or even the drones themselves. It’s all done remotely from the other side of the planet. Killing Taliban in Afghanistan or Al Qaeda in Yemen,  people can do it down the street from the Bellagio.

Egan is a bit lost. He’s an alcoholic, and he doesn’t want to have sex with his wife (January Jones, still struggling to find a role aside from Betty Draper to shine in). He really just wants to go back to being a real pilot, not some video game jockey. He “misses the fear.”

To make matters worse, the CIA is giving the orders, and their rules of engagement are a little different, a little less precise. Collateral damage becomes commonplace. He finds some consolation in the shared experience of co-pilot Vera Suarez (Zoe Kravitz, having a big weekend with also being in Mad Max: Fury Road), but generally he’s miserable. Every day he’s triggering horrors without his own life ever being threatened.

I have to commend Niccol for taking a crack at this, wading into the controversial issue of drone warfare. But the execution is so heavy-handed it leaves craters.

First off, he employs Bruce Greenwood as Lt Col. Jack Johns. He’s the exposition guy, the one who tells all the pilots what they’re doing with this tech, and how it’s not actually video games. In case we didn’t understand the issues here, what’s at stake, a series of scenes has Greenwood explain it to us. (It’s a classic case of too much telling, not enough showing, but at the same time I get the challenge. This material is dehumanizing for the audience, too.)

And then, when the CIA waltzes in (virtually, over the phone, with the voice of Peter Coyote) and makes everyone uncomfortable, they have discussions of the ethics of what they’re doing right there in the “cockpit”.  There’s just no way, given the chain of command,  any of this equivocation would take place while on duty. I can understand that privately there might be some discussion, but it feels like Niccol is taking creative liberties for the sake of spelling out, in broad, obvious strokes, the internal conflict in question. Sloganeering makes everything slow to a crawl.

To compound matters, the domestic drama is barely there. Hawke goes all broody and internal, and Jones never quite reaches the emotional plateaus required. But at least we don’t get American Sniper‘s #fakebaby. There’s no danger of the main message being misunderstood: Our reliance on this remote tech to help us fight our wars doesn’t get us any closer to winning, nor does it help us hang onto what makes us essentially human, our empathy.