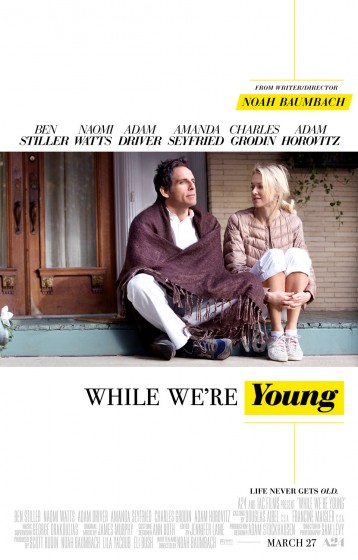 Written and directed by Noah Baumbach

I’m sure I’m not the first person to remark on this, but to me, at his best, Baumbach is a next generation Woody Allen, though the filmmaker’s milieu is among the hipsters of Park Slope and Williamsburg instead of the dustier denizens of the Upper West Side or Fifth Avenue. It helps distinguish Baumbach’s work that its street-level roots are in the realism of the French New Wave, along with other gently mocking New York filmmakers like Paul Mazursky, but I mostly see a reflection of Woody’s interest in awkward social relations.

There’s a hilarious moment in the middle of While We’re Young when Ben Stiller’s character Josh spots a guru getting on a Vespa. It’s tonally a perfect counterpart to that scene in Annie Hall when Alvy Singer is walking through the Madison Square Garden hallway with Pam, and sees the Maharishi come out of the john.

I laughed both at the moment and the similarity, and I’m totally fine with that. I don’t find Baumbach as funny or profound as Woody—I thought his Frances Ha was slight—but I’m thanking the filmmaking gods that someone out there is carrying the torch inspired by Allen’s now-iconic New York anxiety.

Naomi Watts and Ben Stiller are Cornelia and Josh, 40-something New Yorkers who aren’t having children. Instead they’re busy working on creative endeavours—he’s been struggling to finish a docunentary for the better part of a decade, and she produces the work of her father, a legendary documentarian played by the ineffable Charles Grodin.

Cornelia and Josh’s best friends Marina and Fletcher (Maria Dizzia and Adam Horovitz) have just had a baby and have become absorbed into their new life with a child, while Cornelia and Josh become chummy with Jamie and Darby (Adam Driver and Amanda Seyfried), two free-spirited 20-somethings. Jamie’s a filmmaker and a fan of Josh’s earlier work, while Darby is an ice-cream maker.

The older couple find they relate to the younger one more than with the eager-to-reproduce friends their own age, and are excited by the injection of spontaneity and style into their own lifestyle as a result of hanging with these people almost 20 years their junior.

I really enjoyed this cross-generational examination in none-more-hip Brooklyn. We’re deep into a place in our urban North American society where we’re far freer to choose whether to have or not have children, and that decision has very different consequences now than it did our parents. The culture—especially in the big cities—is also spinning faster than ever on the hub of our tech toys, trend fascinations, and the delaying of the big life decisions. It means our lifestyles remain unchanging, along with a need to identify with youth culture, whatever our biological age. But, like the song says, the only thing worse than growing up is never learning how.

Baumbach gets some real mileage with this stuff, and it’s my favourite part of the film—watching Cornelia and Josh embrace Jamie and Darby’s interests, and reconnect with some essential part of themselves, is a blast. The film refuses to ridicule anyone entirely, though it does take playful swipes at pretty much everyone for their angsty compulsions in one way or another, whether it’s Josh and his delicate artist’s ego or Jamie and Darby for their baked-in, peculiar relationship with irony.

At about the halfway point, the picture takes a turn toward a new target and becomes more about Josh and his film, and how Jamie’s motivation to collaborate may not be as genuine as Josh had originally assumed. I appreciate where these plot machinations lead as it raises a lot of questions about authenticity and compromise in creative work.

But, I have to say, the vein of generational schism is so rich, I would have been happy if the film had stayed on its original track, and had been only about age and identity and the challenge of sustaining friendships and relationships in an age of distraction. I wasn’t sure that Jamie needed to become a villain—though I suppose it’s arguable whether he actually is. 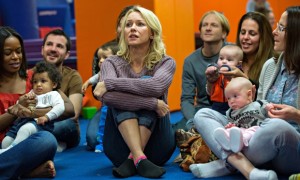 All that said, While We’re Young has plenty to recommend it. I’ve never felt a lot of warmth for Stiller, but I don’t deny his talent, and he’s perfect here—the insecure idealist. The rest of the cast is bang-on, too, including a great supporting role for former Beastie Boy Horowitz—he nails all his scenes, though a late moment where he admits some of his insecurity around parenting feels rushed. That’s on Baumbach and his editor.  Adam Driver also kills, playing a much more manipulative version of his character from Girls.

Maybe see it with someone outside your cohort, and save time for a post-movie postmortem over sushi.