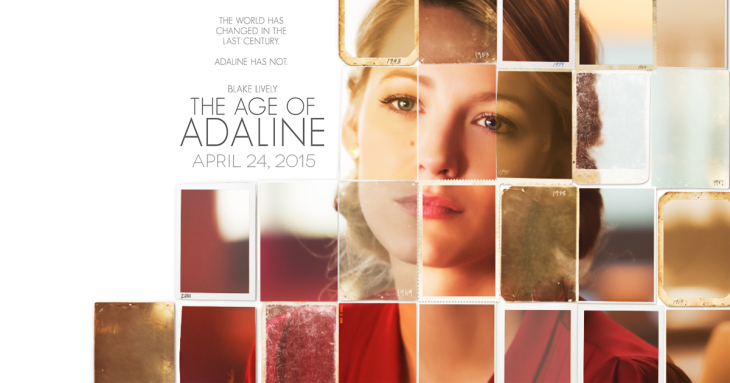 This movie is finally in cinemas—it feels like the trailer has been running for an eternity. I saw it with a very appreciative (and, if I may say, mature) audience on Thursday night. I was not as appreciative. That’s not to say there isn’t entertainment value to be found in The Age of Adaline—I enjoyed the fulsome production values along with a couple of key performances—but otherwise this might be the story Nicholas Sparks would write if someone perversely asked him to deliver a sequel to Highlander.

Adaline Bowman (Blake Lively) was born on January 1st, 1908, as we’re told by an omniscient and irritating narrator. Through outrageous circumstances she ceases to age in her late 20s—something that becomes a problem around her 45th birthday when she can no longer pass for her age without trouble from traffic cops and old friends. She figures the best option is to come up with new identities every once in awhile, keep moving. And no one gets close to her except three or four generations of Cavalier King Charles spaniels and her daughter (Ellen Burstyn), aging at the normal rate. In the present, Adaline’s working under a pseudonym at a library in San Francisco, where she crosses paths with a self-made millionaire (Michiel Huisman) who has an interest in history. And her. If this movie resonates with audiences, it’ll be a star-making role for Lively. She’s luminous, and manages the tricky job of seeming contemporary in different eras, with a little help from hair, make-up, and wardrobe. But even she can’t make some of the stiffest dialogue I’ve heard in ages sound good, make plausible the hokey plot, nor excuse the relentless, pointless fairy-tale voice-over. The sepia-toned cinematography and gorgeous shots of San Francisco from the air offer intermittent respite.

Then, about halfway in, Harrison Ford shows up and single-handedly improves the whole enterprise. His essential charisma  pulls The Age of Adaline out of the clouds and down to recognizable earth for a little while, providing two or three moving scenes—with credit to Anthony Ingruber doing a hilarious Young Ford impression in flashbacks—before it all sort of falls apart again in the homestretch. There is a feature to be made about the tragedy and loneliness of immortality, but this isn’t it. My bet is that film will include a Scot with a big sword, or, at the very least, a vampire. And Mr Sparks won’t be mentioned at all in the conversation.