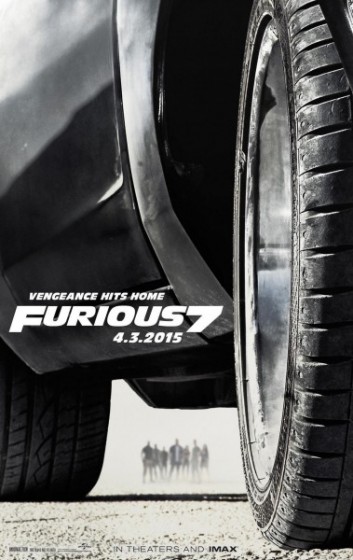 It’s the Easter long weekend. What better way to celebrate this holiday than by spending a couple of hours watching men, slathered in arm butter, drive cars at unsafe speed? The last two entries in the multinational The Fast & The Furious franchise were the best of the bunch, so I have some pretty high expectations of this one, especially with Jason Statham and Kurt Russell added to the cast. I’m curious to see how the filmmakers manage to deliver a coherent, escapist thrill ride given one of the ensemble, Paul Walker, died in an automotive accident before the picture was completed. There is some sad irony here.

(For a review of the past six movies, check this out.)

An excellent indie drama from Newfoundland, the debut feature from director Christian Sparkes. For my thoughts on the film and a Q&A with Sparkes, go here. The Woman In Gold

The team-up we’ve all been waiting for: Helen Mirren and Ryan Reynolds! This is based on the true story of a Holocaust survivor who took the Austrian government to court to reclaim a Gustav Klimt painting her family had previously owned that was confiscated by the Nazis.

The trailer really makes this look like Philomena, doesn’t it? With the lady on a quest for a painting rather than her child, but given the younger man serving as accomplice/advocate, there are more than a few similarities here:

The film goes in like a bullet at The Oxford, finally dislodging The Second Best Exotic Marigold Hotel. And how many weeks did The Imitation Game (now on DVD) play there? The British thesps really draw a crowd on Quinpool, don’t they? Is it just me or is this trailer really poorly mixed—I keep trying to listen to the dialogue but it’s drowned out by the children’s harmonious chanting:

The biggest draw in this almost entirely unheralded Dustin Hoffman picture is the chance to see one of the great actors of her era, Debra Winger, who chooses to work pretty infrequently these days. The last time I remember seeing her on screen she was Anne Hathaway’s mother in Rachel Getting Married back in 2008. The good people at Carbon Arc keep bringing in interesting films. Last week’s french romantic dramedy Gemma Bovery was fun, and this Friday night is the Russian drama Leviathan, which was nominated for Best Foreign Language film at the Oscars.

The next few weeks brings more good ones, including Wild Tales from Spain, and Kumiko: The Treasure Hunter. Go here for more information.