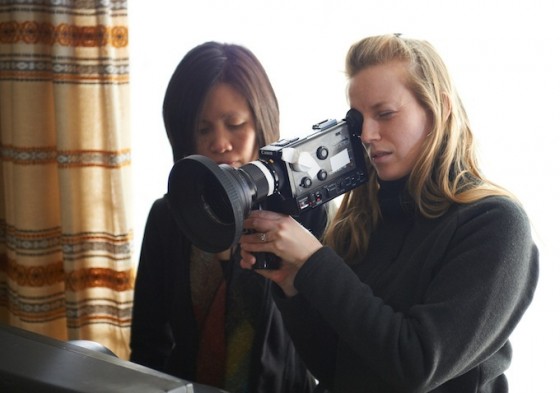 This is a great initiative to encourage more people to watch and value Canadian movies. It’s important, especially now when our politicians are looking to disembowel the industries that create these stories.

If we want them, we have to fight for them. We have to shout about how they’re important to us.

This country has produced some amazing cinema through the years. We have a great tradition of cinematic literary fiction, documentary,  and animation, especially when considering all the good work the NFB has done.

I’d like to take the opportunity to highlight 10 feature films that I’d pretty much recommend to anyone:

This is Deny Arcand’s 2003 sequel to his true original, The Decline of the American Empire from 1986. There was also a third film, Days Of Darkness, in 2007. But, taken on its own, this is a classic with things to say about nationalism, life, death, and the passage of time, and a powerful performance from Marie-Josée Croze.

This was my favourite in 2011, a film I saw for the first time at the Atlantic Film Festival that year—which you can read about here. (Note how I predicted another Canadian film, Starbuck, would get remade in English with Vince Vaughn, which is exactly what happened.)

Cafe De Flore is a metaphysical drama directed by Jean-Marc Vallée, with parallel storylines across time and space linked through music, love, and synchronicity. It’s a beautiful, hypnotic  picture. I’ve seen it half-a-dozen times, and I hope to keep watching it regularly in the years to come.

I wanted to choose a David Cronenberg film, but which one to go for? Dead Ringers may be his most terrifying, but then there’s the tragic body horror of The Fly, the none-more-surreal vision of William Burroughs’ The Naked Lunch, getting freaky on the Toronto highways in Crash, or how about any of his recent collaborations with Viggo Mortensen? Figured it was best to go back to the first one of his I saw, back in 1983, which left an indelible mark. The Dead Zone is an adaptation of a Stephen King story, with Christopher Walken as a man who wakes up from a coma with psychic abilities and a vision of a very dark future only he can change.

Bruce MacDonald is the quintessential filmmaker-as-rock-star, an artist who rages with every one of his films. His 1996 effort, Hard Core Logo, is a mockumentary about a fictional Canadian punk band reuniting for a last cross-country tour, one launched under false pretences. The music will pin your ears back, and Hugh Dillon fully inhabits the iconic Joe Dick, someone who’ll reach through the screen and spit at you.

There are Post-Apocalypse movies, and then there’s Last Night. In 1998, Don McKellar channeled some pre-millennial tension to make a Night of the Apocalypse movie, a strangely lovely look at what a collection of characters do when they know the rest of their lives are measured in hours.

I don’t talk much about documentaries here on FITI, but I do enjoy them, and this was one of the best of recent years. It will probably help if you enjoy metal music, but I don’t think that’s actually necessary to appreciate the film, thanks to Sam Dunn and Scot McFadyen’s anthropological approach to exploring the roots and international impact of this sometimes derided musical form. (Also worth seeing: Rush: Beyond the Lighted Stage, and Iron Maiden: Flight 666, both from Dunn and McFadyen’s Banger Films.)

I saw this when it came out in 1999, a few years before I moved to Nova Scotia, never expecting to ever come to this part of the country. I’ve since made my home here, and I’ve definitely seen places like the one depicted in New Waterford Girl, villages that haven’t changed much since the 1970s when this movie is set. The film is an affecting teen comedy about Mooney Pottie, played by the wonderful Liane Balaban, who fakes being pregnant in order to get a ticket out of her town. And, weirdly, Andrew McCarthy is in it. It feels authentic, never pandering or getting precious.

I host a podcast called Lens Me Your Ears with the multitalented Stephen Cooke. The episode coming out this week is about Tech That Will Destroy Us, which is pretty much what Ex Machina (opening May 8) and Avengers: Age of Ultron (opening Friday) are about. And we discuss this picture, too, from back in 2009, a great monster movie starring Sarah Polley and Adrien Brody as a couple in love and science who splice human DNA into their animal tests and create, as you can well imagine, a monster. Indebted to Cronenberg, director Vincenzo Natali goes places you won’t believe.

And speaking of Ms Polley, she’s creating an amazing career for herself as a filmmaker. After Away From Her, Take This Waltz, and Stories We Tell, I can’t wait to see what she does next. Stories We Tell is ostensibly a documentary about Polley’s family, with a focus on her mother, an actor who died of cancer when Sarah was a child. What it actually turns out to be is a treatise on how memory works, and how we internalize and share our own stories, how they become part of our identity. It’s a masterpiece, and was my favourite film in 2012.

I grew up overseas, and this might have been my first Canadian film experience.  I had never seen SCTV, so had no prior relationship with these characters, but when I watched Strange Brew with my American friends, they, and I, loved it. We’d go around mimicking Bob and Doug’s expressions and accents. It made me proud to be a hoser.

For more quality Canadian film, check out this list.