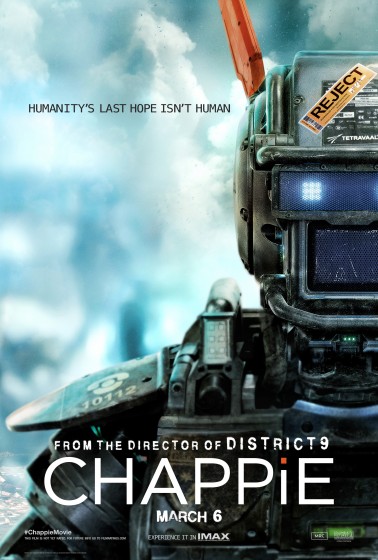 Directed by Neill Blomkamp, written by Blomkamp and Terri Tatchell

But despite that, within its rough-around-the-edges construction, the story of a sympathetic, robot Pinocchio finds a way to deliver where it counts: hard scifi ideas, satisfying action set-pieces, and a conclusion that manages to depart from its antecedents. 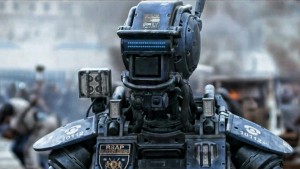 This is the third straight science fiction from South African auteur Blomkamp, so we now can say with some certainty what he’s about: R-rated fantasy and action on a bed of sociopolitical themes: District 9 is a thinly veiled apartheid parable, Elysium is about privilege and poverty, and Chappie concerns itself with identity, how we raise children, and, well, an allegory of security militarization that isn’t really an allegory.

In the film, Blomkamp returns to Johannesburg, the site of his first triumph. Though the Mexico-shot Elysium had three times the budget of his feature debut, it was about one-third as compelling, a narrative mess launched poorly from an interesting idea. But in his backyard the filmmaker delivers more gripping cinema from the get-go.

Private weapons contractor Tetravaal is providing scouts—robot police corps—to the gang-ridden streets of Joburg circa 2016.  Tetravaal tech wizard Deon (Dev Patel) is fascinated with artificial intelligence, even as his boss Michelle (Sigourney Weaver, a stiff, pointless cameo) isn’t interested. Deon has competition right in his office from Vincent (Hugh Jackman, sporting a career-worst mullet), a former soldier who’s designed a much more militarized ED-209-style urban pacification droid. Yes, this opening, including TV news footage, is very much like Robocop, but it doesn’t take long to go in a different direction. 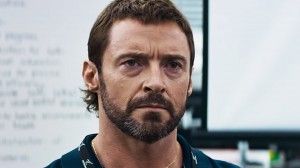 In his effort to implant his AI into an operational scout, Deon, a Gepetto inspired by one of those office kitten posters (I kid you not), steals a robot body scheduled for the scrap heap from the factory floor. On his way home he’s waylaid by gang members Ninja and Yolandi (Ninja and Yo-Landi Visser of South African rap group Die Antwoord), looking for exactly what Deon has in his van: a programmable robot they can use to help them with a big score. They need lots of cash in order to pay back local badass Hippo (Brandon Auret), whose accent is so thick the filmmakers have decided to subtitle all his lines. (It’s not entirely necessary, but it provides a little unintended comedy.)

Deon convinces the gangsters to let him go while the robot stays with the criminals who, over the course of a few days, instruct his childlike but sentient self, now named Chappie, how to live like a banger. He also learns that humans can be a deceitful bunch.

The script takes more than a few quantum leaps of logic in Chappie’s rapid personality growth and understanding of human foibles, though there’s a lot of entertainment value in watching the droid mimic the gang members’ braggadocio in order to feel like he belongs, while also internalizing Deon’s lessons on ethics. And Chappie is a remarkable technical feat of special effects, played in motion capture CGI by Blomkamp’s favourite, Sharlto Copley.

None of this mid-section, which strays heavily into fairytale land, works too well. While I’ve been a fan of Blomkamp’s efforts to inject a gritty realism into his science fiction visions, he falls short on the characterizations and narrative cohesion. With the exception of the robot, you don’t really get a sense that anyone in the piece is a mature human being. You could say they all have poor impulse control, adults acting like children while the artificial being learns the hard lessons of growing up. 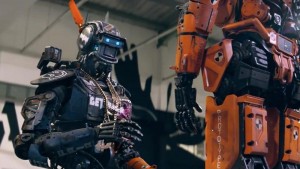 It’s an awkward juxtaposition—with a more PG framed story, this could have been a funny, and inspirational family movie a la Short Circuit, and with a hard shove towards its exploitational roots, it could have been much more visceral. Instead the picture walks an uncomfortable line somewhere in between, where in moments it lulls us with sweetness—Chappie himself is pretty adorable and easy to root for—but also riddles characters with bullets in slo-mo.

Another problem is the choice to cast the cartoonish Ninja and Visser in key roles. Their post apocalyptic aesthetic pops in their tattoos, fashion-forward style, and broad personalities, but they spend most of the movie yelling their lines at each other and gesticulating wildly, often with automatic weapons in their hands. That’s pretty annoying for much of it, but unexpectedly, as things begin to resolve in the third act, they earn our sympathy.

It probably helps that Jackman ends up being a uni-dimensional  villain with no redeeming qualities at all—well, maybe the astonishing mullet—so in comparison the gang members are practically cuddly.

Blomkamp’s visual aesthetic continues to be dust, concrete, and oil, and his most confident directorial trope is handling large scale action sequences with a weapon tech fetish that would make Jim Cameron blush. I can’t help but admire a filmmaker who sticks to his literal and figurative guns, scrapping his way through his narratives despite obvious problems. And the conclusion of Chappie’s arc and eventual disposition I did not see coming at all—I can’t overemphasize how much this lack of predictability in the third act is a huge benefit to making genre pictures feel fresh. Chappie goes new places, and is a big step forward from the trainwreck of Elysium, by virtue of the imagination on display and simply in that the director populates his new film with characters to care about.

Blomkamp may have a way to go, but I’m still on board. His next picture has been announced as an Alien sequel. I’ll join that away mission.