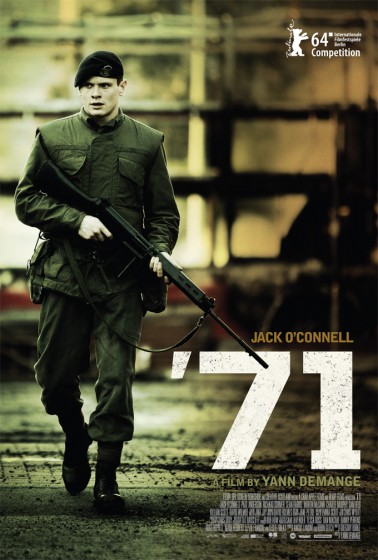 Seemingly out of nowhere this terrific movie has shown up, and it pinned me in my seat—an early contender for one of the year’s best thrillers.

Jack O’Connell—who we last saw suffering mightily through Unbroken—is Gary Hook, a young soldier in Her Majesty’s military in the early 1970s. He gets posted to Northern Ireland. It should be OK—as he tells his brother, he’s not even leaving the country.

But Belfast is very much another land, as Hook is reminded as soon as he arrives. Both the Catholics and Protestants call him “The Brit”, and neither are terribly welcoming of his presence. He and his fellow soldiers are utterly unprepared for the situation they find themselves in, how Belfast has become a battleground between Irish Catholic Nationalists and Protestant Loyalists. Hook’s first street-level assignment with his battalion quickly becomes a riot. In a few bloody moments he’s disarmed and lost behind enemy lines, confused and hurt, with half a city gunning for him.

This isn’t much like some of those slow-burn human dramas about the Troubles I’ve seen before—In The Name of The Father, Omagh, Hunger, or Shadow Dancer—this is much more a breathless thriller, taking place largely through one day and night, indebted to movies like Banlieue 13  or even The Warriors. Shot in Liverpool and Sheffield for that bleak industrial look, a sense of claustrophobic authenticity pervades. As Hook, O’Connell is terrific at emoting pain and fear, but the character is a bit of a cypher, with only a handful of lines. He’s a walking MacGuffin—he drives the plot, he’s who everyone is looking for, but the shaggy fellows chasing him are more interesting.

The real conflict is between the young, fundamentalist IRA faction—basically teens and 20-somethings with radical ideas—and the older, more moderate crew, who’ve seen a lot of pain and have found some compassion. That’s where the drama is rooted, the politics of the place revealed in the eyes and twitchy fingers of the people living through it—even when the double-crosses, combined with some impenetrable accents, make it somewhat hard to follow in places.

Demange does a stellar job sustaining white-knuckle suspense throughout, with great use of visual effects, music, and hand-held camera. The production design is also A-plus, that yellow, orange, and brown colour palette that will forever evoke the 1970s.

This is the kind of movie where you live and breathe in its gritty, everyone-is-always-smoking reality, which only lets you go as the credits roll. You can practically smell the Silk Cuts.