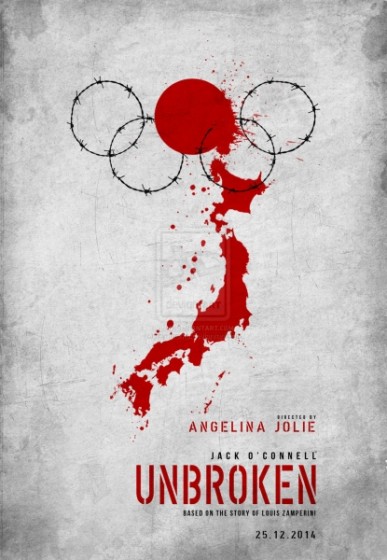 Directed by Angelina Jolie, written by Joel and Ethan Coen, Richard LaGravenese, and William Nicholson, from the book by Laura Hillenbrand

I understand Angelina Jolie felt a serious emotional connection to this material. It’s the true story of Louis Zamperini, an Olympic athlete and World War II bombardier who survived untold horrors when his plane was shot down in the Pacific. After floating in the ocean for a month and a half in a life raft he and another American airman were found by the Japanese and spent the remainder of the war in concentration camps. These places weren’t resorts.

But the film Jolie’s made, her second feature, feels overly reverential and strangely old-fashioned, despite deft use of special effects and a strong handle on the story and the performances. Parts of Unbroken are compelling, but I also found it to be a bit of a slog.

It starts well. We spend the first few minutes in the belly of a B-24 bomber under attack by Japanese Zeroes. The imagery is impressive. Zamperini (stalwart and square-jawed Jack O’Connell) is established as a wholesome, courageous fellow. It helps he’s supported by some of the brightest young stars in Hollywood, including Domhnall Gleeson, Jai Courtney, and Garrett Hedlund.

Then we flash back to Zamperini’s youth in rural California. He learns to run (to escape bullies, mostly) and he’s particularly speedy. But this is where the film slips into a dully conventional zone, the tale of a kid from a family of immigrants who done good and in three scenes goes to the Olympics. And just as the movie threatens to become a Sports Picture, we swiftly return to the South Pacific, with Zamperini bobbing on the blue ocean surrounded by sharks.

In this second act we’re in Survivor Story territory. Whether it’s 127 Days or All Is Lost, these kinds of stories make us wonder how we’d do in similar circumstances. They deal in a particular kind of  suspense, and this portion of Unbroken totally qualifies: the men are on life rafts, fending off sharks. 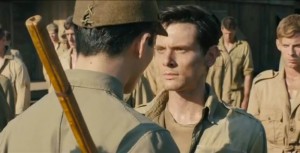 The long, last act switches gears again. We’re in a Concentration Camp Movie, and here’s where it disappointingly lags. As a tally of misery and perseverance, Jolie brings little that’s fresh to a situation we’ve seen in any number of other pictures—The Bridge Over The River Kwai, Merry Christmas Mr Lawrence, Stalag 17, and The Boy In The Striped Pajamas, to name just a few. Zamperini is physically tormented by the camp’s commander, Watanabe (Takamasa “Miyavi” Ishihara) but somehow finds it deep within himself to survive. Sorry for the spoiler, folks, but there was a book written about him, after all.

What surprises me is that the four screenwriters—all boasting careers laden with awards—delivered a script this straightforward and conventional. There’s absolutely no sign of the Coens’ signature intellectualism and absurdity here, and LaGravanese, who wrote The Fisher King and Behind The Candelabra, and Nicholson, who penned Gladiator, have certainly been more inspired.

I couldn’t help but think a coda including stock footage and photographs of our hero, explaining how Zamperini struggled but eventually found religion and forgiveness for his tormentors after the war, might have been best communicated by actors and scenes instead. Showing the impact of PTSD and a man forgiving the unforgivable? That’s a more resonant and relevant message for today than a story lionizing a survivor’s will in terrible circumstances. It felt like a bit of a missed opportunity, to not have included that as part of the drama.

I can’t deny Unbroken‘s heart is in the right place. I just wish I liked it more, that it had more of an original spark to distinguish it from what’s gone before.