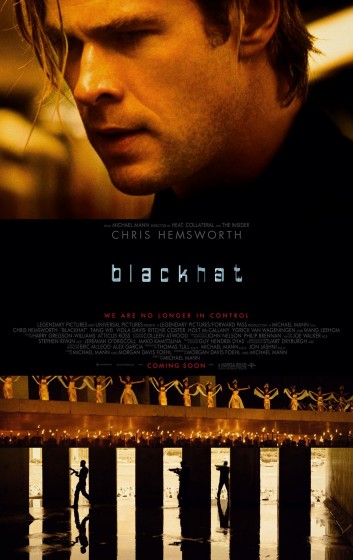 I like Michael Mann as much as the next guy, unless the next guy is Christopher Nolan, who owes much of his aesthetic to Mann’s high-tech, violent, largely nocturnal urban thrillers—including Thief, Manhunter, Heat, Collateral, and Miami Vice—set on gorgeously shot neon- and automatic gunfire-lit streets against throbbing, haunting electronic scores. Watch Heat and then The Dark Knight and you’ll see what I’m talking about.

After the terrific one-two punch of Collateral in 2004 and Miami Vice in 2006, Mann made Public Enemies in 2009, a biopic of 1930s gangster John Dillinger starring Johnny Depp and Christian Bale. Aside from Mann’s continuing knack for high-impact gun battles, the movie never quite delivered the epic drama it was shooting for.

Now he’s back after six years with a picture right in his wheelhouse, a cyber-thriller (whose working title was Cyber) set in international locales, and his gift with kinetic set-pieces and beautiful, almost abstract digital cinematography hasn’t deserted him. There are moments in Blackhat as hypnotic and compelling as anything Mann has done. Disappointingly, the picture is taken out at the knees by a tin ear for dialogue and a dismal way with character.

The set-up is particularly awkward. A hacker disables a Chinese nuclear power plant, causing a meltdown. We get to see the hacker’s digital signals in macro over the planet then micro down to the silicon chip thanks to less-than-compelling CGI visualization, an extended sequence looking like a demo for a 1980s cyberpunk adaptation.

Chinese security expert Dawai (Leehom Wang) gets the go ahead from his government to team up with Americans and track down the cyberterrorist responsible for the power plant attack. Dawai’s old MIT chum Hathaway (Chris Hemsworth), a black hat hacker doing a stretch in prison, is sprung for the hunt with the agreement of a term commutation if he gets results. Dawai also brings his sister, Lien (Wei Tang), though her reasons for being there are a little unclear. Apparently she’s also a digital wizard, though she gets less opportunity to show off her skills. 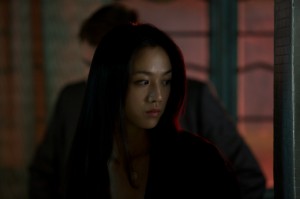 Chaperoning is FBI agent Carol Barrett (Viola Davis) and a federal marshall, a guy so unburdened by personality I’ve forgotten his name altogether. 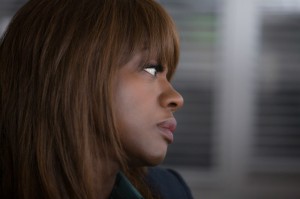 The strategy is two-fold: Follow the cyber-trail and follow the money.  The international co-pro team decamps to Hong Kong, where they locate the people who benefitted from a second hack of soy futures on the US stock exchange. The bad guy they’re looking for is Lebanese dude who speaks Spanish and has a knack with explosives.

Mann handles these interlocking thriller elements well, overcoming the clunky start with increasing locomotion and threat—the shadowy hackers are an amoral bunch—and a great use of locations. From the air and down in the concrete canyons, Hong Kong glows at night, though Mann over-relies on hand-held camera and close-ups, something I hadn’t noticed in his previous work. 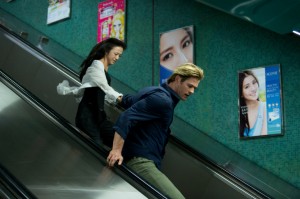 It’s the relationship politic—when Hathaway and Lien hook up—that doesn’t work at all. The leads have no chemistry and the script gives them no opportunity to develop any in their brief chat, make-out, and dry-hump scenes. There’s an incredibly wrong-headed exchange in a helicopter on the way to a firefight where Hathaway discusses with Dawai the budding romance with Lien, prompting the film’s biggest unintended laugh.

All of this is made worse by Hemsworth, whose marble-mouthed thuggishness is a poor fit for the role. He’s an actor who’s shown some skill beyond Marvel’s Norse hammer-tosser in movies like Rush, but he’s about as far away from what is expected of a genius tech nerd as you can get. Are we to assume his stretches in prison have made him a hard man, someone who picked up huge pecs and hand-to-hand combat training to go along with his coding abilities?

Mann enjoys his existential crime dramas where his heroes and villains are mirror images of each other, where one could become the other under the right circumstances. Here the conflict is contained in one guy, his hacker who is working on the side of the angels now, but for how long? There’s some interesting stuff here, but Hemsworth just doesn’t deliver the depth required.

About two-thirds through the running time, things really kick into gear. A final showdown comes together via intersecting second- and third-act points—the plucking of tech from the radioactive mess at the power plant, an exploding car, early morning flights on private jets, a scout of tin mines in Malaysia, and the dropping of a small truck through the rooftop of an important office. The imagination and original scene-setting on display here will pin you in your seat, though it all arrives a little late in the game.

Antagonists finally meet in person amidst a visually impressive but unexplained ritual parade of dancers and costumed torch carriers. That the hero of the piece—and its director—would choose to stage a fight to the death among anonymous innocents speaks to an unpleasant but pervading streak of misanthropy. With the exception of maybe Viola Davis’ character, we don’t meet a lot of real, human beings with genuine emotions in this story.

It’s a tough thing to reconcile: Mann is stylistically head and shoulders above most genre filmmakers and Blackhat shows off some of that skill. But there’s a lot here that doesn’t work, and if one of the biggest joys of the thing is a nostalgic tingle when Mann lifts wholesale a line of dialogue from William Peterson in Manhunter and puts it in Chris Hemsworth’s mouth, something’s amiss.