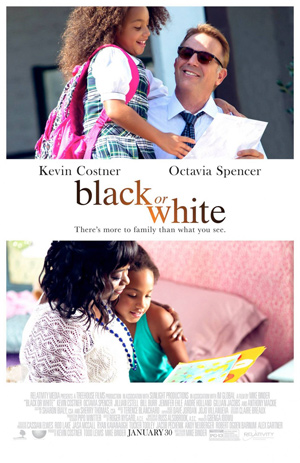 Written and directed by Mike Binder

It’s a rare thing when a feature film makes a game attempt to tackle the slippery issues of contemporary racial politics in the United States. More should. For the effort alone, Binder should be applauded. But his based-on-real-events script tries to do too much, and as a result is a well-meaning but muddled mess, its tone all over the place.

Kevin Costner, in one of his most robust performances in ages, is Elliot Anderson, a Los Angeles lawyer suffering through the immediate aftermath of the sudden death of his wife (the great Jennifer Ehle in dreams and flashbacks). He self-medicates with a lot of booze, despite the fact that he now is the sole provider for his young biracial granddaughter, Eloise (Jillian Estell, winning to the point of being an angel of precocity). Elliot’s daughter, Eloise’s mother, died in childbirth, a fact Elliot blames on his African-American son-in-law, Reggie (André Holland). Reggie’s been out of the picture lately due to his substance abuse issues, though his large Compton-based family, led by self-made matriarch Rowena (Octavia Spencer), still wants custody of Eloise. 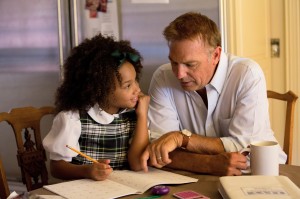 To paraphrase The Big Lebowski, Elliot may be the bereaved but he ain’t no sap. He knows his drinking is a little out of control, so hires Eloise’s well-educated tutor, recent African immigrant Duvan (Mpho Koaho), as his wildly over-qualified driver to get him around town when he’s too loaded to get behind the wheel. And despite the fact he has a civil relationship with Rowena and her sprawling brood, he plans to fight tooth and nail to keep Eloise in his household and away from Reggie, who shows up claiming he’s cleaned up his act. 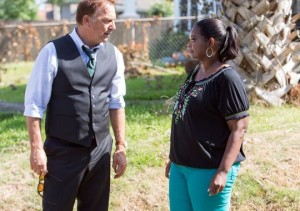 There are some things the movie does well: Elliot’s relationship with Eloise is sweet and fun. I could have watched an entire comedy about the two of them. The way the film depicts the stunning normalcy of the American legal system in people’s lives is also fascinating—in three or four key plot junctures, if Elliot and Rowena just sat down to discuss their priorities and compromised a little they might have been able to work it all out. Instead, they lawyer up, which makes everyone’s lives more difficult, doing little that’s good for the girl at the centre of it all.

I also liked how Elliot’s excessive drinking is juxtaposed directly with Reggie’s addiction. One is marginally tolerated by society, and the other scorned, but Elliot is blind to the parallels. And Elliot’s latent prejudice against black people I think is representative of many so-called liberal white people’s attitudes. I think the film finds some honesty here.

Unfortunately, Black or White otherwise is all over the place.

The stuff around grieving is total Hallmark schmaltz, gag-worthy sentiment enrobed in Terence Blanchard’s syrupy score. And on a dime the film shifts to cheery family time, like when caustic (and drunk) Elliot has to put up with Rowena’s family dropping over to his huge estate for a day in the pool. 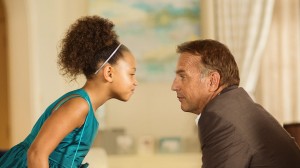 The beatific tone in the depiction of many of the black characters denies them the complexity the film provides to Elliot. Anthony Mackie has a couple of strong scenes as Rowena’s legal eagle brother, Jeremiah, but later as we shift to the courtroom, Rowena’s character shifts—it’s like she wandered in from a Tyler Perry movie. Duvan, who brings some humour, also feels like more a creation of the plot and its need to show a variegated perspective, and help define Elliot, rather than an actual person. And while the story affords Reggie a growing self-awareness and compassion, it doesn’t entirely avoid cliche with him, either.

A picture that attempts to wade into this social and legal minefield of race relations needs to depict full and complete human beings throughout, and despite best efforts, Black or White doesn’t quite manage it.