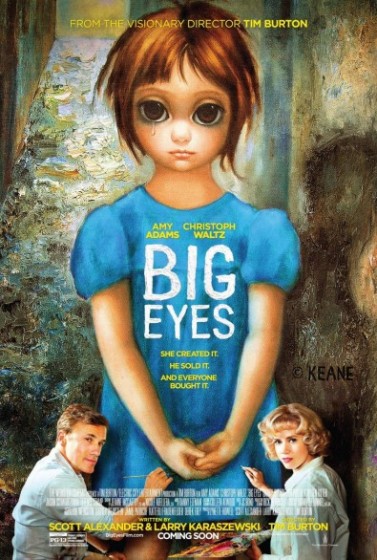 Twenty years ago Tim Burton made Ed Wood, which remains my favourite of his films—Beetlejuice is a close second. It’s also the last time Burton drew from actual events until Big Eyes.

Looking for other comparisons between the two movies, there’s the era and setting: California in the early 60s, Los Angeles in Ed Wood and San Francisco in Big Eyes. There’s a so-called “low art” purveyor in the centre of the picture toiling away without much approbation from the outside world who achieve a particular notoriety beyond the work itself.

What separates the two films beyond two decades is the weirdness and strain of deep melancholy in the former, where in the latter, the sweet sunniness (a lot more like Big Fish) fills the enterprise to the point where the events depicted feel like you’re watching them through gauze. That’s not to say it isn’t a good story, one certainly worth telling, but I can’t pretend I was very engaged.

Amy Adams is Margaret Ulbrich, a bright but shy painter of big-eyed waifs. In 1958 she left her husband and the safety of cookie-cutter suburbia (very Edward Scissorhands for those still keeping track of the oeuvre) with a daughter in tow to pursue work and her craft in San Francisco. There she meets a fellow painter, Walter Keane, played with typical broad flourish by Christoph Waltz, who manages to find an interesting middle-ground between charming and tyrannical. He’s a big talker and a better salesperson than she is. Before long they’re married and Keane is promoting her work. 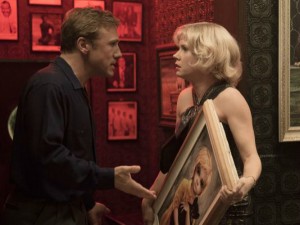 In a very credible and heartbreaking way she cedes the authorship of her paintings to him. Success comes quickly to the couple, much to chagrin of local art snobs—perfectly played by Jason Schwartzman and Terence Stamp.

Krysten Ritter’s DeeAnn, a friend of Margaret, isn’t crazy about it either as she smells a rat in Walter. Danny Huston narrates, as newspaperman Dick Nolan, and the great Jon Polito, a Coen Brothers regular, is club owner Banducci. These faces all bring a lot of character to the film, and I noticed that Burton shoots in regular close-up to emphasize eyes. Especially Ritter, very much a Burton “type,” as Winona Ryder and Lisa Marie have been. It makes the film feel, occasionally, like a moving version of one of Margaret Keane’s paintings.

It could have gone even further. My favourite scenes of the film take place in grocery stores, where Margaret is shopping, wandering down aisles of Campbell Soup cans—an Andy Warhol quote opens the film—and passing by collections of her own work in postcard and poster form, where fellow consumers stare her down with surreally enlarged eyes. A little more of that kind of psychedelia would have been welcome.

The glowing heart of the film is Amy Adams as Margaret discovering her own power and finding a way to resist her husband’s control of her work. She’s the reason to see the Big Eyes, in the kind of role that she knocks out of the park, someone slightly awkward who discovers an inner determination, a trueness that defies her anxiety. She feels much more like Margaret Keane than she ever did Sydney in American Hustle, where her natural quirkiness worked against the her confidence artistry.

Margaret’s journey is a great one and I’m glad it was told, I just wish I felt more invested in it. Burton relishes the pre-rock’n’roll wholesomeness of capri pants and pastel blouses (wardrobe by Colleen Atwood) a bit too much for me. It’s the vaseline-smeared, frosted icing on everything keeping it from manifesting in a truly dramatic way. He clearly loves these paintings, and, even more so, the stories of the creators. It’s great to see him make a film outside his comfort area of the ooky and spooky, but the kooky is so gossamer it threatens to float away.

I save my harshest criticism of Big Eyes not for Burton or anyone who made the film, but for the The Weinstein Co. marketers. The trailer for for the picture has been running for weeks and it simply gives away far too much of the movie. In a taken-from-real-life drama like this, it robs much of the story of its suspense. I knew four of five major plot points simply from having seen the preview.

(For the record: the trailer for American Sniper? That’s how you do it.)