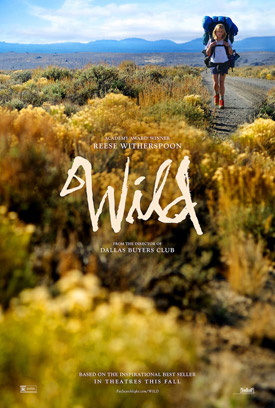 It’s a great thing that the Quebec filmmaker Vallée is working in Hollywood. He made a big splash with last year’s terrific Dallas Buyers Club, though I’ve been enjoying his work since he made C.R.A.Z.Y. and his best film, Cafe de Flore.

Wild is a worthy addition to his oeuvre. Joining a recently hatched genre—female-lead tales of physical and spiritual determination through travel, including the problematic Eat, Pray, Love and this year’s stellar Tracks—Wild is the story of Cheryl (Reese Witherspoon) who (we learn through a series of sharply timed, revealing flashbacks) is recovering from the recent death from cancer of her mother, Bobbi (Laura Dern), with whom she was very close—Bobbi raised Cheryl and her brother as a single mom, rescuing them from their alcoholic and abusive father.

Cheryl has also just ended a marriage to Paul (Thomas Sadoski), though in a very “conscious uncoupling” sort of way—they get matching tattoos to celebrate the day from Everclear bandleader Art Alexakis. That doesn’t mean it isn’t hard for both of them, and it follows months of Cheryl’s flagrant infidelities and heroin use, ostensibly a way for her to self-medicate the grief of her mother’s demise.

We get all this against the backdrop of Cheryl’s thousand mile march along the Pacific Crest Trail, underprepared for the physical toll the desert, forest, and snowcapped landscape delivers on her body and soul. 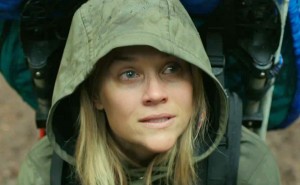 Vallée’s deft way of cutting between the past and the present allows for subtle points to be made about Cheryl’s state of mind, giving us a sense of her as she gets a sense of the task she’s set for herself hiking through California, Nevada, and Oregon.

One of the thing the movie does as well as any I’ve seen—and this is something Vallée has been a master of since C.R.A.Z.Y.—is a deliberate use of music as both emotional gut punches and nicely knitting thematic threads. The choice of Simon & Garfunkel’s “El Condor Pasa (If I Could)”, teased repeatedly until a mid-point scene, is the film’s undeniable heartbeat: a song situated both as an Andean folk tune as well as a 1960s signpost, coordinating two spiritual undercurrents in this story—a traditional mountain culture and the idealism of love and community. The echoes of the 60s are also revisited with a cover of a Grateful Dead track to start the third act.

Other music playing important roles: Bruce Springsteen’s “Tougher Than The Rest”, Portishead’s “Glory Box”, 4 Non-Blondes “What’s Up”, and the classic Lucinda Williams tune, “Something About What Happens When We Talk”. All are perfectly chosen, sometimes existing as hummed under the breath, sometimes as snatches and background, other times playing essential parts in order to forward the story.

Though this kind of film might be rife with self-help cliche, the strength of the direction elevates it. And Cheryl, who is prone to self-destruction, having put herself into the way of extraordinary physical danger, finds that some of the most frightening moments are when she encounters men on the trail—men who suggest they feel free of the constraints of society when no one else is around. This is one of the things Wild does best: show how women can be repeatedly victimized by men simply because of their gender.

But, amidst all the solid vibes I got from this film, I feel it necessary to point out two major problems I had with Wild, and they both concern casting.

First off, as good as Laura Dern is in the movie, it’s plain to see that she’s less than a decade older than Witherspoon. I found it difficult to reconcile that they were more like sisters than mother and daughter. I’m remembering Dern earlier this year as Shailene Woodley’s mother in The Fault In Our Stars, a casting choice that worked much better despite an odd mix of physical characteristics.

Secondly, there’s Witherspoon herself. Full disclosure: I’ve never been a fan. To me, she’s always exhibited an almost Tom Cruise-esque level of overweening ambition in her character depictions—it’s what made her so totally compelling as Tracy Flick in Election. And I liked her as June Carter Cash in Walk The Line. But it makes her less plausible as someone who is primarily internal. Toughness is no substitute for depth, and I never quite believed her as a vulnerable, sex- and heroine-addicted woman. I never bought that she’d relinquish that much control. And, unfortunately, neither did I believe that hiking the Sierra Nevada range was really so difficult for someone as toenail-peelingly driven as she obviously is.

So, as much as I admired the film, I wasn’t entirely sold due to that feeling of rigidity in the movie’s centre. But I also concede I may be in the minority on the Witherspoon front.