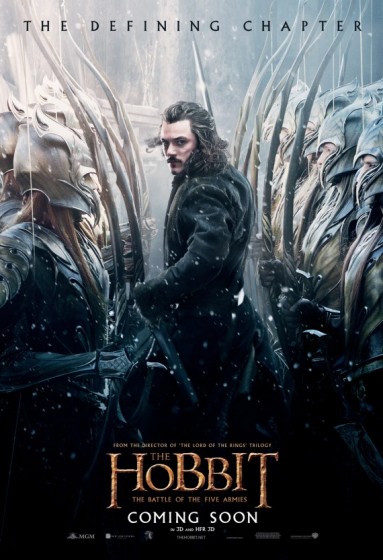 In the first few minutes of this final visit to Middle Earth by Peter Jackson, my cinepanion and I found ourselves whispering back and forth to each other.  We had a lot of questions. “Why was that guy in jail?” “Why aren’t the Dwarves in their fortress?” “What’s going on with Gandalf?”

Neither of us could remember how the last film, The Hobbit: The Desolation of Smaug, ended. Sure, there was a dragon, voiced by Benedict Cumberbatch, and Stephen Fry as the corrupt mayor of a little town down the hill. Barrels full of Dwarves on the river, a lot of archery. Hmmm.

If there’s something that diminishes Jackson’s prequel movies, adapting Tolkien’s The Hobbit, in comparison to his epic Lord of The Rings, it’s this. These three are not as involving and therefore not as memorable. The stakes in the earlier series were higher and the audience was constantly reminded of them: The “Hobbitses” lives were always in danger and we always knew where they were headed and why. Sauron threatened everyone, his terrifying evil eye stared across the land. It forced a band of unlikely interspecies allies to bond, to face the threat to all.

In this series, a large group of exiled, largely interchangeable Dwarves want to reclaim their birthright, a mountain home, and a Hobbit decides to help them do it. He’s the guy in the title, but his motivation has always felt a little foggy to me, which I think is a real problem.

There have been things about all these three Hobbits I’ve enjoyed, especially in the middle chapter. But the fact of it is Jackson has failed to justify making Tolkien’s slim novel into a trilogy. Even just two would have helped to trim a lot of narrative fat. One, maybe by Guillermo Del Toro, may have been the ideal.

But enough what if. What’s good about The Battle of the Five Armies?

Well, the same things that have worked in the other films: the incredible, glorious production design. If, by now, the novelty of swooping cameras over craggy gothic CGI fortresses and windblown New Zealand hills has worn a little thin, it’s hard to deny Jackson invented and perfected his own genre of epic fantasy. And I also can’t besmirch the general sense of professionalism throughout. Bloat doesn’t necessarily preclude entertainment value. It could be that this series might benefit from a binge viewing at home on the couch, but that’s not how we’ve been asked to see it. (Yet, anyway—anticipating the inevitable Blu-Ray boxset.)

The Dwarves, led by their increasingly paranoid king Thorin Oakenshield (Richard Armitage), have holed up back in their mountain home, recently vacated by that fiery wyvern. The Elves (including Lee Pace, Orlando Bloom, and Evangeline Lilly) and humans (Luke Evans and his family, as well as the lake villagers) are at their doorstep, expecting their share of Smaug’s gold. But Gandalf (Ian McKellan) gets wind of an army of Orcs on their way to complicate (or end) everyone’s lives. And Bilbo (an always likeable Martin Freeman) is caught right in the middle.

I estimate the battle scenes take up a good three quarters of the film’s 144 minute running time—the shortest of the three pictures, FWIW. And there are casualties that may tug and some heartstrings, along with a brief but very welcome appearance by Billy Connolly as a bellowing Dwarf warrior.

I’m not sure of the arithmetic, however. Five armies? We’ve got the Humans, Elves, Dwarves, and Orcs. That’s four. Entering the fray there are the Bat People, the Eagles, various Goblins and Trolls, and giant Worms.

Most perplexing is the conclusion, leaving a couple of characters and at least three plot points dangling. The Return of The King had a series of false endings, but one or two more wrap-ups here would have been a good idea.

I wasn’t bored at The Hobbit: The Battle of the Five Armies, but I was far from thrilled. After six visits to Middle Earth, the knuckle-whitening suspense of that amazing Mines of Moria sequence back in The Fellowship Of The Ring seems like a bit of a dream.

I can’t help but think they should have quit while they were ahead. Forthwith let it be that the expression “hobbitized” should indicate a cinematic property expanded beyond its appropriate length for the sake of filmmaker ego or box office reward.