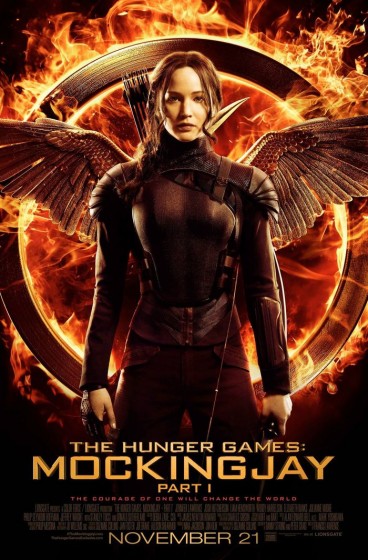 Directed by Francis Lawrence, written by Danny Strong and Peter Craig, based on the novel by Suzanne Collins

This thing starts up right where the last one ended—no need to recap what’s gone on in the previous two films for newcomers. There are no newcomers in The Hunger Games. If we’ve made it this far, we Tributes are defacto Victors. 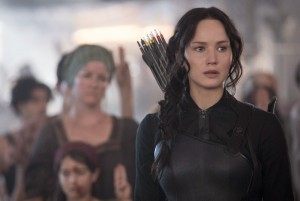 Katniss (Jennifer Lawrence) is huddled in a dark corner somewhere, dealing with PTSD, having survived the Quarter Quell, her return to the Hunger Games arena. Scooped up by the rebellion, she and her family have found sanctuary in the militaristic underground society at District 13. She may be away from the horror, but nothing in her life is safe anymore. She’s tormented by nightmares of what she’s seen and done.

To make matters worse, she’s pissed off that the rebels—including Plutarch (Philip Seymour Hoffman in one of his final roles) and Haymitch (Woody Harrelson)—didn’t arrange for her sweetheart Peeta (Josh Hutcherson) to be rescued from the arena along with her. And she knows President Snow (Donald Sutherland) wants her dead.

She’s also not sure about District 13’s President Coin (Julianne Moore, rocking some grey locks and tiger-eye contacts). Can she be trusted?

It isn’t long before Katniss accepts the only way she can help the rebels and Peeta is if she embraces her role as The Mockingjay, the face of the rebellion. She and her buddy Gale (Liam Hemsworth, offering a slight variation and improvement over his sulky manbot impersonation in the last picture) become subjects of a series of propaganda videos shot in battle zones by Cressida (Natalie Dormer, with her asymetrical hair and head tattoos erasing all thoughts of Margaery Tyrell in Game of Thrones ) and her crew, while District 13 soldier Boggs (Mahershala Ali, Remy from House of Cards) tries to keep Katniss out of danger.

Meanwhile, Peeta is being used by the oppressive Capitol in a series of broadcast interviews to torment  Katniss and discourage the district uprising.

As much as ever this is Jennifer Lawrence’s show. As Katniss, she convincingly goes from nervous breakdown-levels of fear and depression to righteous anger to near-catatonia, with every traumatic emotional shift expressed on her face. The cumulative effect of what she goes through tears her up and carries her off to a dark hole, and thanks to her stellar performance we are on that grim march with her.

The third book in this series—which I consumed just before seeing the movie—is its high point. It takes Katniss away from the arena, where it deftly skewered our addiction to reality and gameshow television, and places her firmly in the Zion-esque revolutionary environment where she becomes another barely willing media pawn, selling the revolution. It’s probably the thing I enjoy most about the series—both books and movies—how it takes a hard look at the way we consume, what gives pleasure to our eyes, and what it means to be famous: conspicuously miserable, as Ambrose Bierce once wrote.

But what the books do better than the movies is show us why Katniss would go to such lengths to protect Peeta: He’s written as a kind, thoughtful, articulate, and giving individual—someone who people are drawn to. In the movie he’s Hutcherson, who has next to no chemistry with Lawrence. And she’s so good she has a tendency to flash-fry or make invisible any actor around her who can’t match her commitment. As an audience, it’s hard to understand why Katniss is so obsessed with Peeta, and as she becomes more unhinged, her love for him feels like, at best, melodrama, and at worst, madness.

Gale’s not much more appealing, but at least he and Katniss can do stuff together, like hunt, fight, and be devastated about the piles of charred skeletons back in District 12. 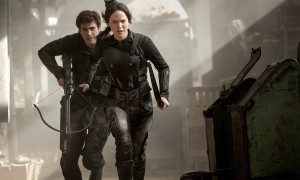 In between Katniss’ rocky moments, we do get a little bit of humour and some decent action sequences, including a couple of scenes of what other districts are doing to fight off the Capitol’s Peacekeepers, including bombing an enormous hydroelectric dam.

A clever change from the books is bringing Effie Trinket (Elizabeth Banks) into District 13 and eliminating the other make-up and wardrobe supporting cast. Banks injects a welcome bit of levity to her scenes as she suffers through an epidemic of drab fashion crime.

The answer to the question of whether the movie really suffers from its hobbitizing—being expanded from a single book to two movies for reasons of box office—is a measured “no” from me.

But while I enjoyed the film, I recognize a few dramatic longeurs. I think a 150 minute version of the entire book would have made an epic and better conclusion to the series, and forced the filmmakers to trim some of the fat.

Instead, we’ll have to wait a year—Part 2 is released November 20, 2015—and anticipate the pleasure of binging on the inevitable box set to follow.

Life in our Panem is pretty good.