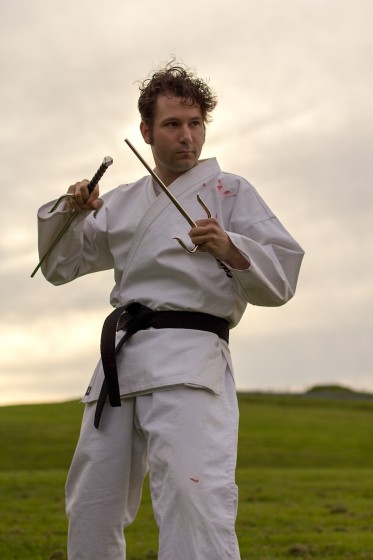 He says he’s won martial arts competitions. He says he has fans. He sells video copies of his early work, including a feature called They Killed My Cat, at video stores (CD Heaven in Dartmouth features early on), and signs autographs for the customers. His magnum opus is called Blood Fight, a karate action epic about good versus evil.

But there’s much more going on here. Kung Fu Elliot is the culmination of two years of the documentary filmmakers following Scott around as he makes Blood Fight. We get to know him and his friends, as well as his producer/girlfriend, Linda Lum, who supports him as he pursues his dream. We even go to China with him. But as things tick along, the height and breadth of Scott’s tall tales become apparent. What puzzles, confounds, and compels about Kung Fu Elliot is the question of whether Scott lies to himself as much or more than he lies to everyone around him.

I met with the two creators of the documentary, Matthew Bauckman and Jaret Belliveau, to talk about the film. 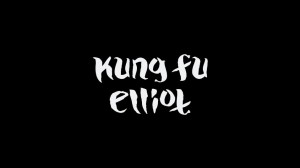 Flaw In The Iris: Did you know when you started this journey, what you had in your subject?

Jaret Belliveau: We had a sense that Elliot was charismatic. He was doing something interesting, trying to make a low-budget film. And Linda was super-complex. I mean, she didn’t open up to us for a year.

Matthew Bauckman: I think we just thought this would be our version of American Movie—we’re big fans of it. We had this guy who maybe wasn’t the best filmmaker, but he had a lot of heart. As far as alluding to what happens later, the more dramatic, darker stuff, we had no idea. We just knew that there was some kind of disconnect there, but we thought he was harmless.

JB: We could easily prove some things he said were exaggerations, but we thought, well, whatever. He’s just a guy trying to make it. Faking it ’til you make it. And he had such a posse of people around him who were really into it. We were like, so what if he tells some stories? It just makes the documentary more interesting. But never did we think it would go where it went. We also liked the idea that we had someone telling these stories in a documentary, which we see as being all about truth. You have an untrustworthy narrator, how does that change the documentary experience? As soon as it started getting hurtful, we became more concerned.

MB: And we became present in the movie, too.

FITI: Do you think it ever occurred to Elliot that you were filming evidence of his deceit?

MB: I don’t think he planned long term. Elliot pretty much lives in the moment. But it wasn’t weird that we were there. As soon as we showed up, Elliot felt like of course these guys are here to film me. It look longer to get Linda on camera, because she was slow to open up. And we didn’t know how much she was in on it with Elliot, all the things he was saying.

JB: We thought maybe she was in on all of it. It was just us finding out about this guy. He went to Moncton High School, my high school. I remember standing next to him in art class, and he was wearing a trench coat and had his friends around him. He always looked like a 35-year-old man. He stuck out. I remember watching him wrestle. But you give people the benefit of the doubt. You don’t want to come up to him and say, hey, you’re full of it. Maybe he wasn’t a champion, but maybe he had won something. 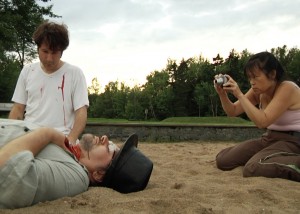 FITI: Is it true he had another documentary crew following him?

MB: They showed up and we met them, yeah. Elliot was “cheating” on us.

JB: We’d started filming a year earlier, but had to take a six-month break because we didn’t have the money to continue. Within that six months someone else had started. So we showed up at a shoot and they showed up. It kind of became a race, until we went to China and they didn’t. We financed that trip through an investor.

FITI: I was really impressed with the shooting of the film, especially when you went to China. It felt as though the filmmakers behind this doc were better than their subject.

JB: We really worked hard to make sure the film mimicked our experience. China was really the point where it looks like Elliot has a chance to change, but he doesn’t. We were so angry at him for awhile. He attacked me. I was punched in the back of the head eight times. We were very jaded. Elliot was hurting everybody, and why was he doing it? Did he need to fuel his ego that badly? It took us a long time to process what happened and bring it out in the movie. Directing, shooting, and editing a documentary is incredibly difficult. It takes a lot of tries. We have so many cuts of this film. Even after we won Slamdance the film was cut by nine minutes to the version you’ve seen. We believe the audience makes the film. You need to be open to an audience and what they tell you.

JB: And Elliot lacked any of the objectivity or self-assessment to become a good filmmaker.

MB: Or a decent human being. 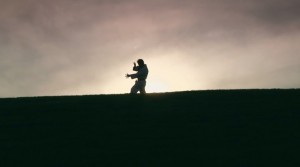 JB: One of the questions we get asked the most is, “How were you able to stay with this guy for two years?” We always believed the story had enough to stay with it. We never knew what Elliot was going to say next. We are playing with the question of what is reality. And Elliot is living a real life in his head. His feelings are real to him, on some level. He was happy, and successful, by making films. It was enough for him, to feed that imagination. There are so many people who are creative who doubt themselves. Even when they succeed they beat themselves up.

MB: Martin Scorcese said he thinks every film he makes is going to be his last one. But Elliot says, let’s make the next one! Elliot doesn’t feel that self-doubt. He thought Blood Fight was going to be the best movie ever. It’s real to him.

JB: Then there’s that line it crosses, when it becomes dangerous. Every creative person needs a certain amount self-delusion in order to get up in the morning and say, I’m going to do this.

MB: We had a lot of self-doubt. Especially a year-and-a-half in, when the big dramatic turns hadn’t even happened yet. We’d be driving back from Halifax to Moncton wondering what we were spending our year on.

JB: And what’s real. I’ve given up self-analysis on that. We just moved forward.

MB: We tried to analyze Elliot and his motivations. We thought we had him pegged early on. By the end we realized we had no idea.

JB: Was he cheating on Linda the whole time? Probably. Was he going to fetish parties the whole time? We don’t know. We know that, aside from him having been in a coma, nothing he said was real. Besides the fact that he has a big penis. He does. That’s where his confidence comes from.

FITI: Have you had any contact with Elliot since the end of the filming?

JB: We haven’t seen him since that day, no. He’s out of the country. We’ve been sending him emails. Before Fantastic Fest, we almost had him coming from Mongolia to Austin, Texas, to be there. Timing-wise it didn’t work out.

MB: We’ve seen a lot of photos. He’s definitely there, teaching English. He has a new girlfriend.

JB: When he was in high school he claimed he was in a rock band. He had groupies. He’s had many different lives.  He may be a farmer now.

FITI: Does the irony that Elliot will likely become better known through your documentary than his own films appeal to you?

JB: We talk about that all the time. We’ve made him way more famous than he ever would have been. We wanted to get him on Jimmy Kimmel. We’ve had opportunities come up. We’ve talked to people in Hollywood about remaking this as a narrative feature. It could have a whole other life. And we’d like to do that for him. I mean, he gave us access to his life, his story.

FITI: It’s amazing to me that you still have such a warm feeling for him, despite the fact he lied to you and tried to beat you up.

JB: Well, I understand it. I didn’t feel like this all the time, but I forgave him. I never hold anything against Elliot. And neither should you—I bet if you put my life under a microscope, it wouldn’t look good in places. He takes exaggeration to another level, but we all have the ability to lie a little. Some people think he’s a hero, especially his friends. He has good parts to him.

FITI: I think the thing I found so fascinating was wondering how much he was believing his own bullshit.

MB: I feel like what people get from the movie is what they bring to it. Some people are very cynical and say these are ridiculous people making a ridiculous movie, why should I care? Some people are really emotionally invested. Your concern about him being honest with himself? For Elliot it’s not a concern.

JB: I love that part of this movie. It really holds a mirror up to its audience.