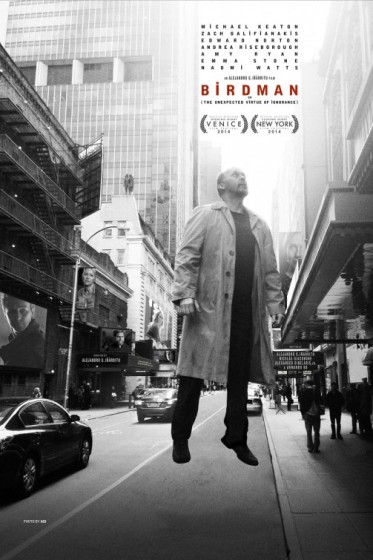 After I saw the movie I considered the career of Michael Keaton. I always respected the guy as both a talented comedic and dramatic actor—in movies like Night Shift, Beetlejuice and Clean and Sober. He has a compelling, combustive quality. There’s nothing warm about Michael Keaton—he’s all points and razor blades. That caustic edge made him convincing as the troubled superhero in Tim Burton’s Batman, but that role was a bit of a glitch in his career as a leading man. He was an unlikely choice and an unlikely fit, and he was never in anything as big again.

That said, he certainly hasn’t wanted for work. While he’s nowhere near the star he was 20 years ago, I’ve never thought to myself, “Hey, here’s an actor who didn’t get his due,” or “Michael Keaton deserves a comeback!”

It’s hard to watch Birdman and not conflate the role with the performer. Keaton might not actually need the revival, but Birdman insists he does. 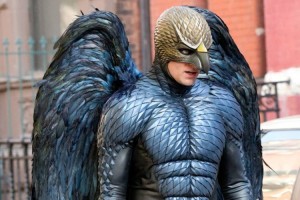 Keaton is Riggan Thompson, a down on his luck Hollywood actor associated with having played an avian superhero. He can still hear that gravelly and judgmental Christian Bale-esque voice in his head, taunting him for what he’s trying to do now: write, direct, and star in a play on Broadway based on a Raymond Carver story.

Riggan’s buddy Jake (Zach Galifianakis) is helping him bankroll the project and his semi-estranged daughter, Sam (Emma Stone), fresh out of rehab, is his assistant. Helpfully, an actor he hates gets hurt on stage and is replaced by the much more talented (and volatile) Mike (Edward Norton), who’s sleeping with cast member Lesley (Naomi Watts). Riggan is in a relationship with another cast mate, Laura (Andrea Riseborough), while his ex and mother of Sam, Sylvia (Amy Ryan), drops by regularly while the production revs up. But the previews are a disaster. As opening night approaches, Riggan starts to unravel.

What I like most about Birdman is the prowling camerawork by Emmanuel Lubezki of Children of Men fame. The film is assembled as if the entire running time (excepting the film’s coda) is one long steadicam shot. Without a doubt it’s been edited in places, but it’s been done seamlessly. This feat—and it is pretty impressive—follows the characters from the theatre’s bowels and dressing rooms to the footlights to the alleys and sidewalks surrounding, the neighbourhood bars, and even into the air. It gives the film a play’s sense of immediacy, upping the theatrical intensity and realism—except when it doesn’t. Add semi-regular orchestral and drum breaks on the soundtrack and you’ve got a dynamic tension in which to set the story.

I wish I liked the story more. The film is basically a bitter pill about the terminal self-involvement of those who choose the business of show. Riggan is broke and miserable, unable to deal with his aging turkey skin or having been a bad father to his daughter because he was always working—he hates his shallow, meaningless movie star legacy. The play is his last chance to achieve some kind of artistic credibility and respect from an audience and community who don’t care—critics and the press, in particular, take a real bashing.

Then there’s the feathery meta quality overlaying the entire endeavour. It’s no accident that along with the lead, two more key cast have starred in superhero movies in the past few years—Norton in The Incredible Hulk and Stone in The Amazing Spider-Man. The constant reminders of comic book movies and their shallow pointlessness just come off as sour grapes. George Clooney is referenced, someone whose time in a pointy-eared cowl served as no obstacle to a bigger and better career than Riggan/Keaton’s. Noticing these connections is neither funny nor illuminating, it’s rife with self-pity.

The “on-stage” performers manifest every thespian cliche you can think of: paralyzing insecurity, vanity, deceit, aggressive sexuality, hamminess, and alcoholism. Only Sam has an outside perspective of this theatre-full of self-loathers and self-lovers, but despite that even she’s not immune to its denizens’ charm.

All the movie seems to be telling us is fame is a pit, showbiz is for suckers, the media is poison, and none of us, whether under the hot lights or in the audience, can resist it. And yet as it explores and occasionally exults this theatrical milieu, the film revels in its cinematic magic-realism, doing things you just can’t do on stage.

There should be some delight to be found in this contradiction. Innaritu, helmer of serious, capital A Art House movies like Babel and 21 Grams, is unable to deliver the light touch this material needs to relish its own absurdity and rise above the nastiness. The bravura construction of Birdman is something I wouldn’t discourage any serious cinephile from seeing, but right through to the multiple false endings and the unexpected triumphs of some of its characters, it just feels smug and self-satisfied.

If there’s any fun to be had, it’s in the performances—especially Norton and Keaton, bouncing off each other in a frenzied battle of egos.

Keaton’s versatility has never really been in doubt. His appearance in Birdman is a reminder—if we even needed it—that he’s as energetic and intense as ever. I hope his work here means we’ll see him a little more often.